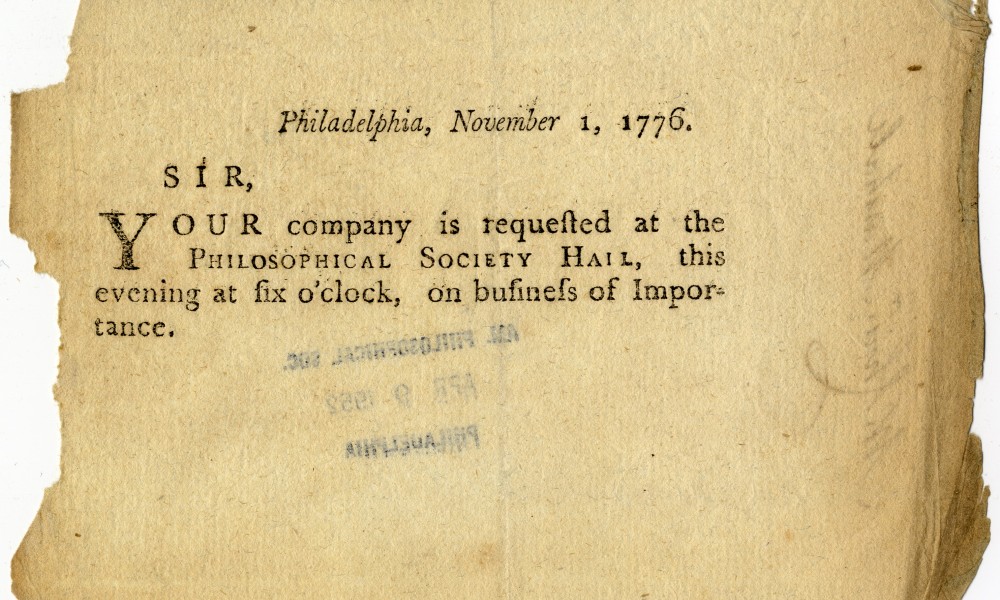 Launching an Inspired Idea
"The first drudgery of settling new colonies is now pretty well over," wrote Benjamin Franklin in 1743, "and there are many in every province in circumstances that set them at ease, and afford leisure to cultivate the finer arts, and improve the common stock of knowledge." The scholarly society he advocated became a reality that year. By 1769 international acclaim for its accomplishments assured its permanence. Franklin's influence and the needs of American settlements led the Society in its early days to pursue equally "all philosophical Experiments that let Light into the Nature of Things, tend to increase the Power of Man over Matter, and multiply the Conveniencies or Pleasures of Life." Early Members included doctors, lawyers, clergymen, and merchants interested in science, and also many learned artisans and tradesmen like Franklin. Many founders of the republic were Members: George Washington, John Adams, Thomas Jefferson, Alexander Hamilton, Thomas Paine, Benjamin Rush, James Madison, and John Marshall; as were many distinguished foreigners: Lafayette, von Steuben, Kosciusko.

The Dimensions of Knowledge
In the 18th century, natural philosophy, or the study of nature, comprised the kinds of investigations now considered scientific and technological. Members of the American Philosophical Society encouraged America's economic independence by improving agriculture, manufacturing, and transportation. Greatly contributing to the Society's international fame was its participation in astronomical observations of the 1760s. With one of his telescopes, erected on a platform behind the State House (now Independence Hall), David Rittenhouse plotted the transit of Venus, thus attracting the recognition of the scholarly world.

Francis Hopkinson, a signer of the Declaration of Independence, and Samuel Vaughan, a recent immigrant, led the revival of the Society after the Revolution. In 1780, Pennsylvania had granted it a charter guaranteeing that the APS might correspond with learned individuals and institutions "of any nation or country" on its legitimate business at all times "whether in peace or war." The state also deeded to the Society a portion of present-day Independence Square, on which it erected Philosophical Hall in 1785–1789.

The APS fulfilled the function of a national library and even patent office.

Learning and Freedom
The enlightened terms of the Society's charter and the location of Philosophical Hall adjacent to the seat of government clearly illustrate how closely the new nation linked learning and freedom, regarding each as the support and protection of the other.

Until about 1840 the APS, though a private organization, fulfilled many functions of a national academy of science, national library and museum, and even patent office. Accordingly, chiefs of staff, cabinet officers, and presidents often consulted the Society. Jefferson, and other Members of the Society, instructed Lewis and Clark concerning the scientific, linguistic, and anthropological aspects of their impending exploration of the Louisiana Territory.

The Society served as the prototype for a number of other learned societies, and gave birth to specialized organizations for agriculture, chemistry, and history. For many years the Society's hall provided space for the University of Pennsylvania, Thomas Sully's studio, Charles Willson Peale's museum, and several independent cultural and philanthropic organizations. In the latter half of the 19th century, the Society's interests were chiefly in the areas of American paleontology, geology, astronomical and meteorological observations, and Indian ethnology. The status of the APS is reflected in its Membership. John J. Audubon, Robert Fulton, Charles Darwin, Thomas Edison, Alexander von Humboldt, and Louis Pasteur were Members. The names of Albert Einstein, Robert Frost, George C. Marshall, and Linus Pauling hint at the scientific, humanistic, and public accomplishments of 20th-century Members. The Society first elected a woman in 1789—the Russian Princess Dashkova, president of the Imperial Academy of Sciences in St. Petersburg. Elizabeth Cabot Cary Agassiz, Marie Curie, Gerty T. Cori, and Margaret Mead are among other women elected.

Vitality and Growth
Vital new directions for Research, Meetings, and Publications were implemented in the 1930s thanks to major gifts by R. A. F. Penrose, E. R. Johnson, and others. A Research grant program began; it has invested large sums in many scientific endeavors. Although some projects received substantial sums, such as archaeological excavations of Tikal, Guatemala, most grants sponsor modest projects, helping to produce scholarly books and articles. Another program arose to help scientists beginning research careers in clinical medicine. One of these individuals, David Fraser, later led the U.S. Public Health Service investigation of Legionnaires' Disease. The Society currently supports five granting programs.

The Publications program, which had maintained a journal and a monograph series, added a book series, the Memoirs, and a Yearbook. During the 1930s growth required moving the Library into rented space in an adjacent building; in 1959, the APS erected a specially designed facility, Library Hall. By 1981, expanded APS activities necessitated the purchase of a third building.

During World War II, the APS broadcast a radio series on science to Europe. Following the war, the Society helped lead the restoration of what became Independence National Historical Park. Scientists gathered at Philosophical Hall to consider the effects of atomic energy on the world. Other special conferences spawned practical new ideas, such as microfilm publishing.

In addition to recognizing superior accomplishments by election to Membership, the Society awards special prizes and medals. Established in 1786, the Magellanic Premium for discoveries "relating to navigation, astronomy, or natural philosophy" is the oldest scientific prize given by an American institution. It has acknowledged the submarine circumnavigation of the globe and satellite space probes. The Barzun Prize (est. 1992) recognizes contributions to American or European cultural history. The Franklin Medal (est. 1906), designed by A. and L. St. Gaudens, has been awarded, among others, to Eduard Benes, Charles Huggins, and Otto Neugebauer. The Jefferson Medal (est. 1993) is awarded for distinguished achievement in the arts, humanities, or social sciences; the Lashley Award (est. 1935) recognizes achievements in neurobiology; the Lewis Award (est. 1935) honors a publication by the Society, and has been awarded to Enrico Fermi (1946), Millard Meiss (1967), and Kenneth Setton (1984), among others. The Moe (est. 1982) and Phillips (est. 1888) Prizes honor papers in the humanities and jurisprudence.