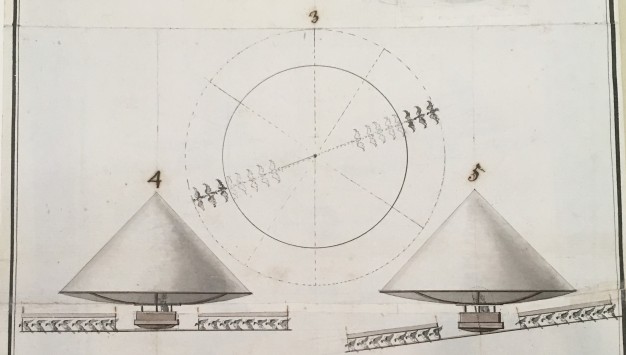 In my research for Dr. Franklin, Citizen Scientist, I learned that birds crop up with curious frequency in Franklin’s papers and publications, most notably as the unfortunate subjects of some of his electrical experiments. In an April 1749 letter to his friend Peter Collinson, Franklin jokes about hosting a party at which “a turkey is to be killed for our dinner by the electrical shock.” The joke eventually became reality, according to the appendix of the second edition of Franklin’s book, Experiments and Observations on Electricity (pictured above), which retells his account of trying to kill a turkey by means of electricity. With two six-gallon Leyden jars (special glass jars that could capture, store, and discharge electricity), Franklin had successfully killed common hens and other small birds with little trouble, but it seems that the turkeys put up more of a fight. Turkeys shocked with two jars would experience “violent convulsions,” pass out briefly, and then recover within 15 minutes or so. Franklin persisted, however, adding three more jars, which eventually killed a 10-pound turkey (but not without giving Franklin a shock of his own!). It was a delicious success as well--the electrocuted turkey was reported to be “uncommonly tender,” so perhaps we should be consulting Franklin for Thanksgiving recipes?

Franklin returns to poultry in his maritime observations, as discovered by my fellow intern Sean Keenan. In addition to several unique designs for boats, Franklin also designed a special water trough for chickens on board ships crossing the Atlantic (fig. 25 above). Chickens at sea were often sickly, and the common perception was that they suffered from “overwatering,” so Franklin’s design sought to solve this problem by dividing a large water trough into individual bowls, thereby controlling the portion of water each chicken received. This also made it easier to ration water on board the ship, as fresh water supplies were limited. However, modern understandings of chicken dietary requirements indicate that this invention was unlikely to work as intended; chickens actually need up to a quart of water per day, especially in hot, stressful conditions like those at sea.

Last but certainly not least, birds emerge once more during Franklin’s time in France in the mid-1780s. 1784, in particular, was the height of the hot-air balloon craze in Paris, after the Montgolfier brothers successfully completed the first human balloon flight in November 1783 (Franklin had a front-row seat from the terrace of his home in Passy). Julien-David Le Roy, a French architect, wrote to Franklin to share his own balloon designs, including a very unique cone-shaped balloon, powered by--that’s right--birds. Le Roy’s avian-powered aerostation was intended to make use of bird flight to enable human flight, and in the extensive memoir that he sent to Franklin, he notes that the birds would need to be extremely well trained, like falcons, so that they could be made to start and stop flying at any time. Le Roy’s innovation was devising a way to get the birds to change direction all at once, which he acknowledged was the more difficult piece of the puzzle. As illustrated in the above drawing, the birds perch on a long horizontal pole connected to a vertical bar in the center that allows the operator of the machine to turn the birds in different directions from inside the passenger basket. The pole carrying the birds can also be tilted to raise and lower the balloon, and the birds’ perches would be covered with a fine cloth that could be lowered to stop the birds’ wings from moving, if necessary.

From the 18th century to the present day, animals have maintained a presence in experimental practice. Birds (and other creatures) serve both as scientific subjects and inspiration for new inventions and discoveries. Maybe these ideas weren’t so bird-brained after all!

For even more chickens in the collections, check out this post!