As of July 6th, APS offices are open to staff and invited visitors. The Society will remain closed to the public until further notice. Library & Museum staff now have access to our collections and will respond to reference and photoduplication requests as soon as possible. However, please note that response times may be delayed due to increased demand. The Society will continue a robust slate of virtual programs throughout the fall. Read more about virtual programming and resources that can be accessed remotely. For further information on the APS reopening and its COVID response, please click here. 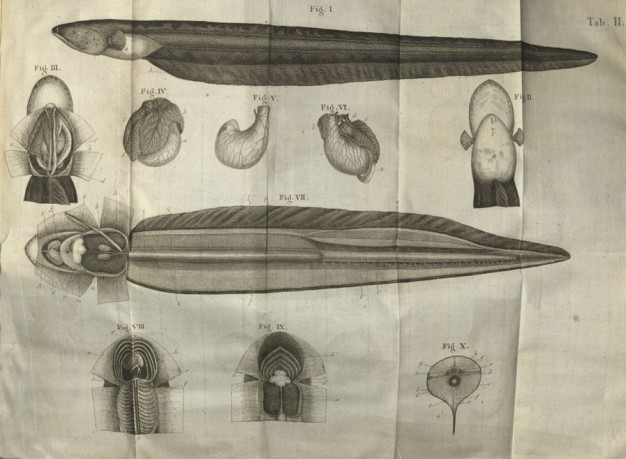 By Rosemarie Fettig, Bryn Mawr College
2019 Curatorial Research Intern
The following blog post is adapted from a presentation given as part of the APS Library’s Brown Bag Lunch series.

In preparation for the APS Museum’s upcoming exhibition on Benjamin Franklin and science, I’ve been researching Franklin’s more well-known experiments with electricity as well as the scientific context in which he was operating. As I’ve learned, mid-18th-century electrical studies had an elaborate culture of its own, spawning theatrical demonstrations, fishy obsessions, and early attempts to use electricity for medical purposes.

Experimental philosophers had been studying electrical phenomena since the late 17th century, but cutting-edge research was primarily done in Europe. Franklin’s correspondence with Peter Collinson, a prominent member of the Royal Society of London, led him to develop a fascination with electricity, and in 1751 his letters to Collinson were published in the book Experiments and Observations on Electricity, Made at Philadelphia in America. Franklin’s contribution to this ongoing discourse marked an important point in electrical study where experimental philosophers understood the “electrical fluid” just well enough to feel confident manipulating it. The newly developed electrical machines allowed them to generate static electricity, store the charge in Leyden jars, and discharge them at will, facilitating new experiments and broader access to natural phenomena.

Electrical experimentation became a curiosity among the well-to-do in Europe and in the American colonies, going from scientific niche to highly fashionable amusement in a matter of years. Those who could afford it brought basic electrical instruments into their homes and read electrical texts—considered to be a “moral” diversion that broadened the mind. By the mid-18th century, electricity was truly a household name.

This popularity manifested in the form of sensational electrical demonstrations, such as those performed by Ebenezer Kinnersley, a friend and correspondent of Franklin. These demonstrations were a shocking yet respectable source of entertainment, with the most dramatic acts involving the interaction between electricity and the human body. Demonstrators would run electric current through participants, causing them to shock each other on contact.

It wasn’t all just for show, though, as electricity had been a highly embodied field of study for quite some time. Discourse between theoretical and experimental production of knowledge led to a growing reliance on material evidence and sensory proof, a method for which Franklin became an icon. “Electricians,” as they were commonly known, subjected themselves to electric shocks in attempts to better understand the nature of electricity. Even as understanding grew, questions remained about the usefulness of electricity, beyond simply knowing about it and showing it off.

Enter the fish. Fascination with what would come to be known as “electric fish” (the torpedo ray, the Nile catfish, and the electric eel) enabled the transition from body-as-tool to body-as-subject. The torpedo ray had been a known quantity since antiquity—the ancient Greeks used this “numbfish” for medicinal purposes—but electrical studies reignited interest in these fish. The French scientist Michel Adanson compared the shock of the Nile catfish to the shock of the Leyden jar, leading scientists to begin hypothesizing about the fishes’ potential electrical qualities.

Benjamin Franklin designed a set of experiments to be performed on the torpedo ray, found in the Mediterranean and off the English coast, which he sent to his friend John Walsh, a British naturalist. Franklin suggests first touching the fish with various conductive and non-conductive materials, then having a group of people join hands while one of them touches the fish, conducting the shock through their bodies. Studies by Walsh and other naturalists eventually reached the conclusion that the shocks of the torpedo ray and the other fish were indeed electric, an understanding that proved vital to the development of theories of bodily electricity, the idea that electricity could be organic to living beings.

Stay tuned for part 2 of this post, where we’ll explore 18th-century experiments with medical electricity!

The Rare Opportunity to Restore Personhood

Uncovering the Experiences of Female Loyalists