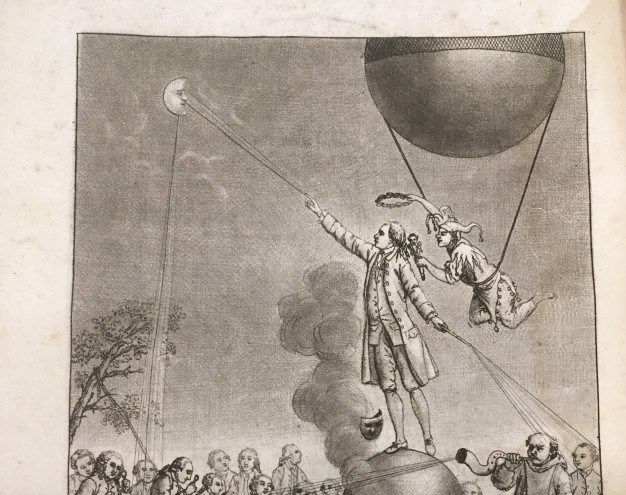 By Rosemarie Fettig, Bryn Mawr College
2019 Curatorial Research Intern
The following blog post is adapted from a presentation given as part of the APS Library & Museum's Brown Bag Lunch series.

As my previous post described, the embodied study of electricity in the 18th century led to some pretty unique experiments.

Electrical medicine in the 18th century was right at the intersection of electric experiments on the body, electrical understanding of the body, and a desire to make electricity useful. Electrical treatments were used for both physical ailments, such as palsy, stroke, seizures, and rheumatism, and mental ailments, such as hysteria and melancholy.

Franklin himself experimented with medical electricity, starting with his treatments of James Logan, a respected Philadelphia public figure. Logan was aware of scientific developments in electrical experiments and medical research at the time of his second stroke, and underwent shock treatments under the supervision of Franklin. These treatments had no lasting effects, however, and in a letter to the Royal Society of London, Franklin declared electrical treatment of physical illnesses ultimately unsuccessful.

He also treated a young woman known only as C.B. for “hysterical epilepsy.” C.B. is believed to be the sister of Cadwallader Evans, a medical student who worked with Franklin and later published a report of the treatment. She suffered from convulsions, and sought electrical treatment herself directly from Franklin. The details of the treatment were not well documented, but she made a full recovery. Franklin never wrote about C.B. in any of his publications or letters, so it’s possible that he believed her “cure” to be due to the power of suggestion and thus took no credit for it.

Franklin also theorized about treating melancholy, or depression, by electricity with his friend and frequent correspondent Jan Ingenhousz, a Dutch physician. Franklin and Ingenhousz wrote to each other about accidents they’d had involving electricity, wherein both men had suffered electric shocks to the head but felt no adverse effect beyond slight retrograde amnesia (which they didn’t seem to find a problem with). Ingenhousz also noted feeling “the most lively joye” after his shock, which led the two men to theorize that electric shocks could be used to treat melancholy. While they never performed any trials of their own, other electrical operators tested electrical treatments with moderate success, but the practice fell out of style and wasn’t revived until the 1930s.

Electricity began to get touted as a miracle cure, but Franklin remained skeptical. This skepticism made him an ideal candidate for the commission ordered by Louis XVI of France to investigate Franz Anton Mesmer in the mid-1780s. Mesmer was an Austrian physician who claimed to have discovered “animal magnetism,” a unifying energy that flows through all things with the power to cure illness, but only he and his assistant could manipulate it. He offered his services to the rich in various European capitals, becoming more and more theatrical at his lodgings near Paris until Louis XVI demanded an investigation into his practices. Mesmer was thoroughly discredited by the commission’s work, some of which took place at Franklin’s house in Passy.

Electricity in the mid-18th century was a deeply embodied field, relying on both human and animal bodies to develop the fullest possible understanding, and for this reason, mid- to late-18th-century electrical work is often regarded as an exemplary use of the scientific method that had emerged with the Enlightenment. For the study of electricity, feeling was essential to understanding, and no one knew that better than Ben Franklin. His integration of scientific method and skepticism represent a turn towards evidence-based knowledge and material proof that continues to inform modern scientific practice.