September 1, 2021
Share
Michael Madeja is the Head of Education Programs at the APS Library & Museum. Prior to joining the Museum team... END_OF_DOCUMENT_TOKEN_TO_BE_REPLACED 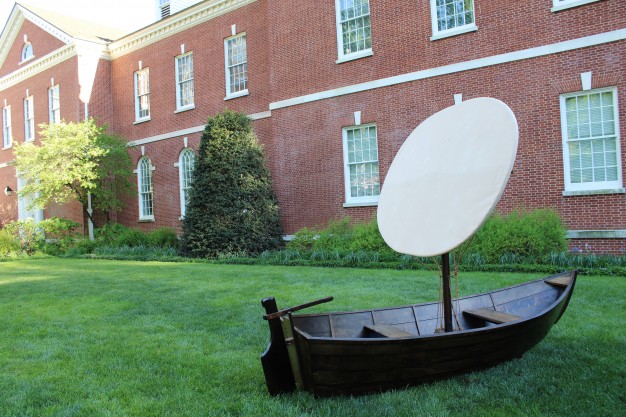 Did you read that title more than once? If you did, there is no pirate-like mischief about it! A boat is docked in the Society’s Jefferson Garden. Passersby might have noticed the boat, A Peculiar Craft, the newest artist installation to pop up in the space. A Peculiar Craft brings to life sketches of a boat found in the Franklin-Bache papers. Artists Ben Neiditz and Zach Fay used the sketches and information gleaned from APS Staff to construct Franklin’s “Boat for pleasure or fishing parties on the Delaware River.” Drawing on the Dr. Franklin, Citizen Scientist exhibition, A Peculiar Craft prompts viewers to think about Franklin’s connections to the water, the sciences of studying it, and the labor and economics behind understanding its rhythms.

In both the sketches and in the Garden, the boat has sails that can rotate on two different axes. To get a better sense of that dynamic construction, think of the mast as your spine. You can pivot or bend forward or backward, like you are bowing. You can also turn or rotate 360 degrees in a circle. The mast of this boat can similarly make those movements. Unique in this way, the sketches and idea for the installation inspired not only staff but APS Members and the artists as well.

Staff are still digging into who actually drew the boat sketches. Right now, we’re unsure but have some hunches. Some guesses include David Le Roy and Benjamin Franklin himself. However, some quick handwriting analysis and comparisons aren’t promising. Though seemingly simple, these sketches hold some mysteries and are currently unattributed in the Franklin-Bache papers!

Sarah B. Pomeroy (APS 2014) provided text, drawn from her recent publication, Benjamin Franklin, Swimmer: An Illustrated History, for an interpretive label. As Dr. Pomeroy noted, “for Benjamin Franklin water was both a passion and a subject. In his Autobiography he wrote about his fascination with the sea, whether navigating it in boats or swimming through it. Franklin’s youthful inventions included swimming paddles (like fins) and an early method of kitesurfing.” Meanwhile, the artists drew inspiration from Franklin's collaborative and tinkering spirit.

Neiditz, who has made multiple art installations for the Jefferson Garden, had to bring on a collaborator, Zach Fay, for the first time. Neiditiz mentioned that neither he nor Fay had ever built a boat before, and that “this project was very much an exercise in discovery and experimentation with new methods, materials, and techniques.” Neiditz also said that “engineering the spinning of the mast so that it could withstand the force of the wind required some experimentation.” Both of these statements align with their lens for A Peculiar Craft. To the collaborating artists, “Franklin seems to have spent a good amount of time experimenting with the material world and trying out new things.” Ultimately, Neiditz and Fay hope that A Peculiar Craft “captures the visitors’ attention and convinces them, even if for just a moment, that they have a brief moment of questioning what they are seeing.” A truly Franklin-esque hope to seek answers through scientific inquiry.

We hope you have time to sail by the Jefferson Garden to do just that. Before you do though, plan your visit to the Dr. Franklin, Citizen Scientist exhibition! Both will be on view until the end of December 2021.