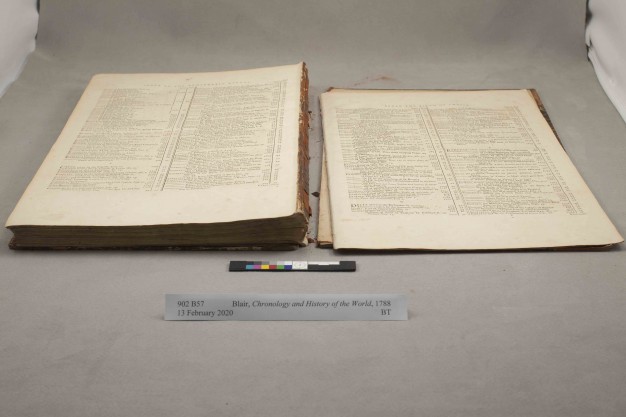 Joseph Priestley, a chemist who isolated oxygen and several other gases, was also a teacher. His focus on pedagogy led him to create some of the earliest and most influential timelines ever published. His theological and political beliefs, however, resulted in his flight from England to the United States in 1791. (He helped to establish the Unitarian Church in England, and supported the French Revolution.) He settled in Pennsylvania, and was elected to Membership in the American Philosophical Society in 1785.

Although Priestley was no longer teaching, his interest in timelines continued. At some point he purchased a copy of John Blair’s Chronology and History of the World from Creation to the Year of Christ, 1788, which charts the course of sacred (i.e., Christian) and secular history through 56 tables of people and events. A preface about the spread of geography and three indices—focused on events before and after Christ, as well as on famous historical figures—round out the book. After Priestley’s death, APS Librarian John Vaughan (APS 1784) bought his friend’s copy of Blair’s Chronology from bookseller Thomas Dobson, and later donated it to the Society.

Most of the tables of the 104-page timeline were engraved on large sheets of high-quality, heavyweight paper, which were then folded through the middle to be sewn into a binding. To keep the blank backs of these engraved plates from being seen as the book was read, the outer edges (or fore-edges) of the leaves were stuck together with dough wafers. Wafers were disks of baked flour paste colored red with vermilion. When they were moistened, they became sticky, and wafers were commonly used in the 17th through 19th centuries as we would use tape or staples today, to seal letters or hold insertions within books.

The APS’s Library appears to have had this unusually structured book rebound sometime in the 19th or 20th century. By the 21st century, the modern leather from that binding had deteriorated and become weak and powdery. The sewing thread holding the book together was broken in many places, and many of the wafers had also torn from the leaf edges, allowing the tables to separate. The book was clearly in need of rebinding, but none of the presses in the Library’s Conservation Laboratory was large enough to accommodate the folio volume, which is almost 19 inches tall.

In 2019, however, the Library purchased a German combination press, whose interchangeable jaws provide clearance for books up to 19.5 inches tall. The jaws can also be pivoted, allowing a book conservator to insert the book parallel to the floor, tighten the jaws of the press, and then swing the jaws upright, so the book is perpendicular to the floor and the spine is readily accessible. This new equipment—together with Pamela and James Hill’s adoption of the volume—has allowed Blair’s Chronology to receive the attention it deserves. Conservation treatment is now underway, and the book will be ready for use when the Library reopens to researchers. Keep an eye on the Conservation blog for more treatment details!