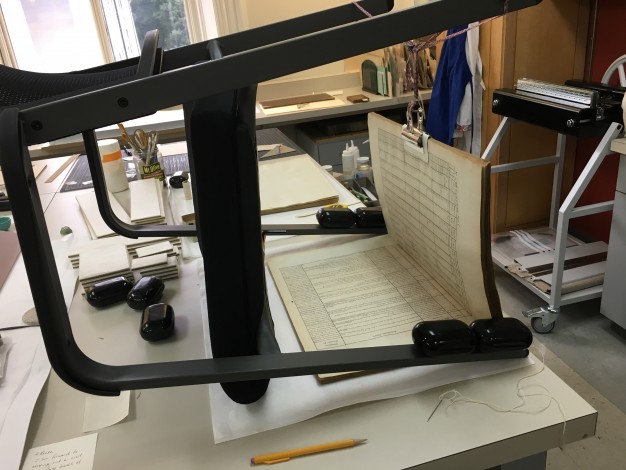 When last I mentioned Joseph Priestley’s copy of John Blair’s Chronology and History of the World from Creation to the Year of Christ, 1788, the book was in several pieces. Its sewing was broken, and its leather spine was rotten and split. Its lengthy timeline of world events, formed from an accordion of high-quality paper stuck together with dough wafers, had separated in many places. At the time of my last blog post, I was engaged with mending the split spine folds of the book’s engraved plates so it could be resewn and rebound.

Resewing proved to be a fascinating challenge. The book’s large size and accordion format meant that I could not use my usual sewing frame (pictured above). In a traditional book, the text block is made of several “signatures” or “sections,” each of which consists of one or more folded sheets nested together. To make these individual sections into a text block that can be bound, the binder sets up a sewing frame with taut cords or tapes running from the deck of the sewing frame to a crossbar at the top. Each section is then laid on the deck in turn, and the binder uses a length of thread to sew through the fold of the section and out around the cords or tapes, securing the sections to the vertical sewing supports and to one another. (When round cords are used as sewing supports, they create the horizontal bumps across a book’s spine.)

In the case of Blair’s timeline, I did not have individual sections, but a thick stack of folios (individual folded sheets) that were already connected to each other at the outer or fore-edge of the text block. Somehow, I had to sew these connected folios one at a time as in traditional sewing, starting at the bottom of the stack. How could I keep the upper part of the stack from getting in my way and weighing down the folios below?

After much head scratching and experimentation, I at last engineered a modified sewing frame from an office chair. I suspended the fore-edge of the stack of connected folios from a padded clip secured to the chair legs, and I propped the spine edge of the stacked folios on a couple of blocks. By peering between the blocks and stretching my arms to their utmost, I was able to sew one folio of the stack at a time. When I had finished sewing one folio, I released the whole stack from the clip and the blocks, then separated out the next folio and laid it on the deck to sew. Then I had to suspend and prop up the remainder of the stack again. The whole process took days, but when I was finished, the interior of Blair’s Chronology once again held an intact timeline.