September 2, 2020
Share
Bayard L. Miller is the Head of Digital Scholarship & Technology. He spends his days running the Center for Digital... END_OF_DOCUMENT_TOKEN_TO_BE_REPLACED 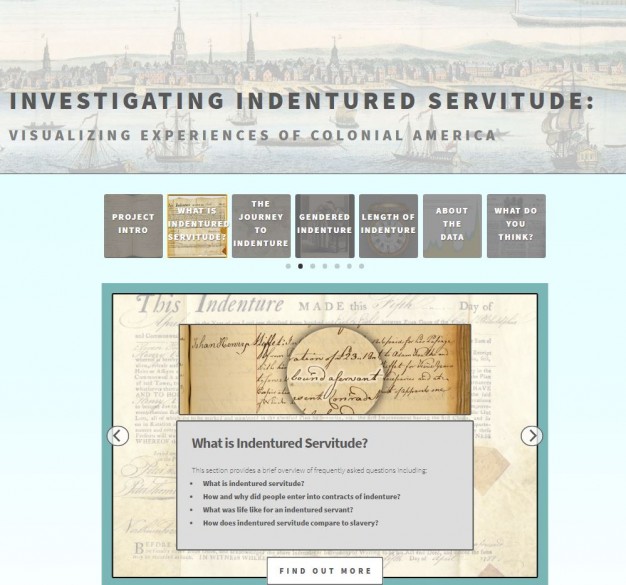 The Center for Digital Scholarship (CDS) is pleased to announce the launch of Investigating Indentured Servitude: Visualizing Experiences of Colonial America. This digital exhibition is the part of the CDS Open Data Initiative and the culmination of three years of work with the (longest title in the APS catalogue) “Book of Record of Indentures of Individuals bound out as apprentices, servants, etc., and of German and other Redemptioners in the office of the Mayor of the City of Philadelphia from October 3rd, 1771 to October 5th, 1773.”

The exhibition offers a glimpse of the story of migration to colonial British North America. While the data only covers a three-year period, it has the potential to tell thousands of stories, and reveal new knowledge about migration, unfree labor, and exploitation. Many of the individuals recorded in the "Record of Indentures" have been lost to history. We hope that this resource will open a path for their stories to be told.

After releasing the dataset in 2019, the CDS built a collaborative project with University of St. Andrews Ph.D. Candidate, Nicôle Meehan (2019 Digital Humanities Fellow). We have three main objectives for this project. First, we want to engage users in a conversation about indentured servitude centering the data and its potential uses. To this end, the exhibition examines indentured servitude using a suite of interactive visualizations based around three themes: distance, gender, and time. Each thematic section begins with a story told through data, as seen in the visualizations below.

Second, we want to highlight individual stories of people found within the data. We pair each visualization with the story of a person found within the "Record of Indenture." Catherine Biesman (image below) is one such individual. She was indentured for 26 years, an unusual amount of time.

Finally, we want to see how users interact with the site and the data. To this end, we have included a section for user-generated feedback. As with all open data projects, Investigating Indentured Servitude is a living project. We encourage you to dive in, see what you find, investigate the data, and let us know what you think!

Investigating Indentured Servitude encapsulates the collaborative spirit of the CDS and couldn’t have been completed without the dedicated work of Digital Projects Specialist, Cynthia Heider, 2019 Digital Humanities Fellow, Nicôle Meehan, and of course the originators of the project, S.L. Ziegler and 2017 C.V. Starr Intern, Ben Weinstein. A special thanks goes out to Dr. Billy G. Smith for his constructive criticism and guidance throughout the project. Read more about the detailed process by visiting our process documentation here.