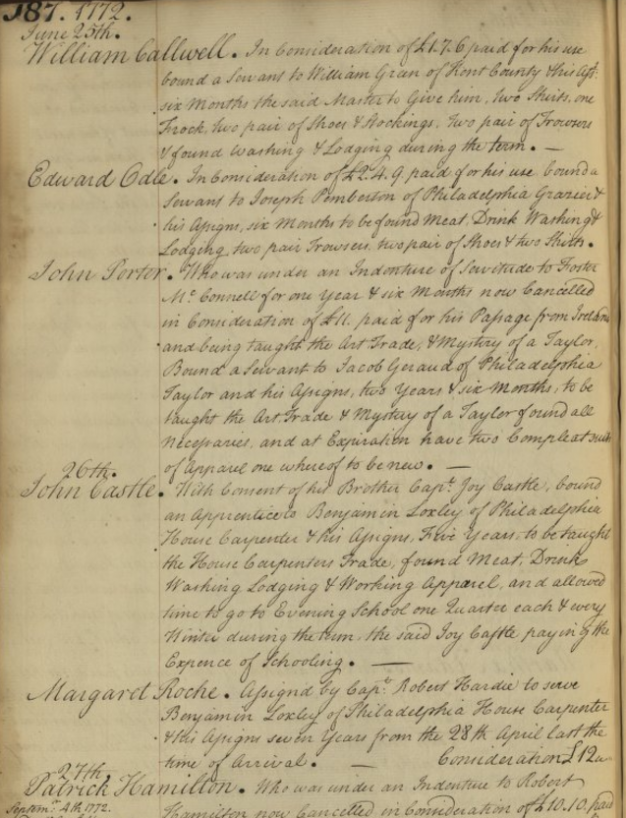 During the summer of 2017, C.V. Starr Center Explore America Intern Ben Weinstein digitized the descriptively titled volume, “Book of Record of Indentures of Individuals bound out as apprentices, servants, etc., and of German and other Redemptioners in the office of the Mayor of the City of Philadelphia from October 3rd, 1771 to October 5th, 1773.”

Containing between 4,000 and 5,000 entries, this volume details the terms of servitude including length, skills that will be taught, location where they will live, and often countries from which they came. Also included are the names of the people to which the individuals are being bound.

This volume has long been an important resource for genealogists, as well as scholars of migration, immigration, and labor.

Ben’s work allows unprecedented access. The entire volume is on the APS Digital Library, completely free and open for everyone to use. And Ben’s work even goes further. In keeping with the APS Library’s Open Data Initiative, Ben has begun the process of creating a data set from this volume by transcribing the content into spreadsheets, which can then be analyzed in many different ways.

By reformatting the data within the book—by moving beyond the scanned page, and putting the data in a spreadsheet—we can build maps showing where the individuals came from and where they went. We can quickly build charts and graphs showing the months in which the most contracts were recorded and the people who contracted with the most indentured individuals.

Ben Weinstein contributed to this blog post. He is the 2017 Washington College Explore America Intern working at the APS Library on a project to digitize and transcribe indenture records. Ben is a rising senior at Washington College studying philosophy.