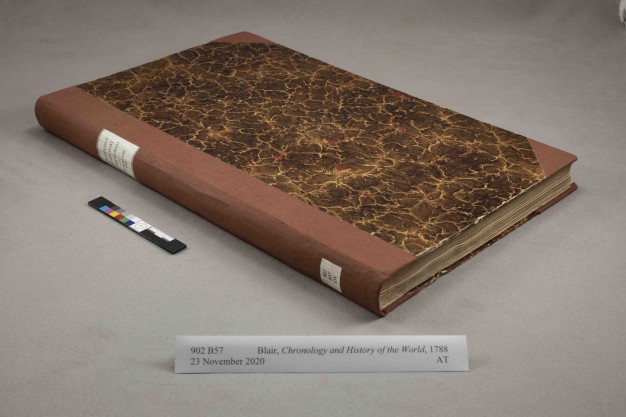 Once I had solved the problem of resewing John Blair’s Chronology and History of the World from Creation to the Year of Christ, 1788, which I described in my last blog post, I still faced the challenge of rebinding this large and unwieldy volume. Guarding the many engraved plates and text leaves with new Asian paper and then resewing the volume had resulted in additional thickness at the book’s spine, which binders have traditionally termed “swell.” To distribute the swell evenly and keep the book’s spine from becoming concave over time, binders since the late medieval period have rounded the pasted-up spine into a smooth convex shape with edges that overhang the book boards. This process involves a lot of handling and manipulation of the sewn text block, and it proved to be an enormous challenge (literally) with this book. I’m tall and I have long arms, but the sheer size of the Chronology—and the brittleness of the leaf edges, which kept trying to chip off as I pressed the text block this way and that—meant that I could never quite achieve the smooth rounded spine shape I was hoping for. Still, I managed to approximate the curve of the spine in the book’s last binding, and moved on to the next steps: lining the spine and sewing new endbands.

Spine linings and sewn endbands can help support the spine of the book as the volume is opened and closed. Without spine linings, the book will open into a sharp V between pages, stressing and eventually breaking the sewing system. Lining the spine with paper or fabric stiffens the spine until it produces a gentle arc when opened, spreading the stress evenly across its entire width. In this case, I placed the Chronology in the oversized German book press spine-side up, and lined the bare spine with two layers of thin, long-fibered Japanese mulberry paper, then an extended lining of airplane cotton to assist with board attachment, and finally two layers of handmade Western paper glued between the sewing tapes to make the spine as smooth as possible. I then sewed new striped endbands of white and red linen thread, like those that were originally included with the volume. Sewn endbands like these help to consolidate and support the text block at the top and bottom of the spine.

To reattach the book boards, whose acidic leather had been removed, I excavated channels in the board edges to accept the ends of the linen tapes over which the book had been sewn. I glued the tapes into these channels, and then glued the extended edges of the cotton spine lining on top. Finally, I covered the spine and corners of the book with a rust-colored commercial bookcloth that approximates the color of the leather in the book’s last binding. If I had to do this treatment again, I would stiffen the linen tape sewing supports with parchment to reduce torque in the spine, and create a stiffer final spine covering (perhaps a laminate of cotton and thick Asian paper). While I wish its spine were smoother, however, the treated volume is once again intact, and its chronology is easily accessible.