February 17, 2021
Share
Sabrina Bocanegra holds a B.A. in Anthropology from Temple University and her M.S.L.I.S. from Drexel University. Sabrina got her start... END_OF_DOCUMENT_TOKEN_TO_BE_REPLACED 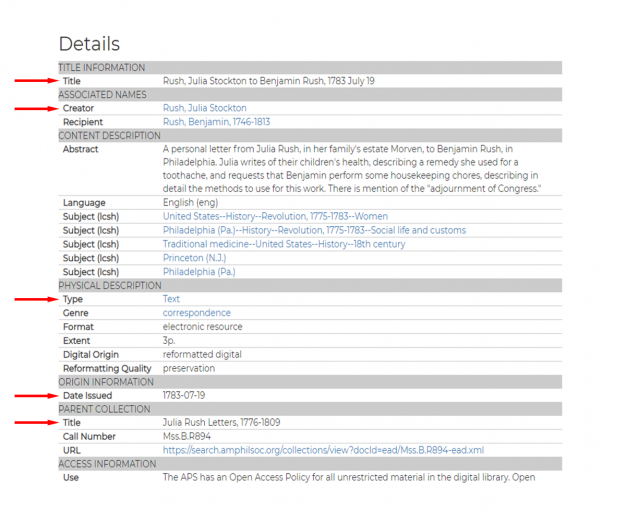 Since starting Revolutionary City: A Portal to the Nation’s Founding, one word that has been on my mind is metadata. Metadata, as it relates to archives and libraries, is the various information accompanying a given object that provides context and aids discoverability.

My relationship with metadata started as a volunteer at the Historical Society of Pennsylvania in 2013. Back then I didn’t realize that my work, researching manuscript collections and adding descriptions to finding aids, was actually creating metadata. As I worked my way through library school, I learned that cataloging and creating meaningful and consistent metadata for collections are among the most important duties of any collecting institution. Entering the archives world, I have been fortunate to work on projects where creating metadata for collections and their digital surrogates was an essential function of my job. My role as Project Data Manager for Revolutionary City is no different.

Providing access to digital objects is the primary focus of this project. However, it is important to understand that digitization (scanning and uploading a digital image to a website) of archival materials does not alone create a fully accessible digital object. Metadata is crucial and there is a significant amount of work that goes into preparing, creating, reviewing, and modifying metadata for an object. Throughout the past month, I continually asked myself what’s the best approach to creating meaningful metadata for digital objects? To start, any project involving digitization and access should have guidelines that we, the metadata creators, follow in order to create meaningful and consistent metadata.

As a pilot project, it is necessary that Revolutionary City develop a set of guidelines for creating metadata, especially when considering the long term goal to expand beyond the three Philadelphia institutions and include other regional and national partners. So now my earlier question grew wider—what’s the best approach to creating meaningful metadata across multiple institutions?

A tried and true approach to creating meaningful metadata for a given object is to require a set of fundamental metadata elements (or fields) in order to create a record. This is called core metadata—elements like the title, creator, date, and collection name of a given object. Luckily, there are some projects similar to Revolutionary City and other individual institutions that openly share their documentation for creating core metadata. Though this documentation is catered to their specific scope and goals, nevertheless it can prove helpful. As metadata within the archives community grows more consistent and interoperable (able to be exchanged and reused), projects like Revolutionary City don’t have to reinvent the wheel. Core metadata gives us a starting point for answering the root of my questions. The documentation referred to above will help narrow down a list of metadata fields that we should require of any institution that contributes material to Revolutionary City. But how can we ensure that those core metadata remain consistent across multiple repositories with varying collection strengths and priorities?

While exploring the design and functionality of digital repositories built on Islandora (an open source digital repository system that the APS and other libraries and archives use), I was able to examine metadata created by 300 different institutions. What I found (to my surprise) is that there is a varying degree of metadata requirements, or core metadata, among even this small set of repositories.

Again, I thought about what I heard in library school—metadata is crucial for making materials findable, understandable, and useful to the end-user. Developing and managing metadata is resource intensive and not all institutions set the same priorities when cataloging their material. Inconsistencies in metadata can hamper discoverability within a single repository; creating a portal across multiple institutions like Revolutionary City only compounds the challenge.

As this project grows, this is an issue that we will have to deal with head on and looking ahead to how other institutions can contribute to the portal is a crucial part of the planning process—hence metadata on the mind.

In the next few months, I’ll be diving into ways others have dealt with the challenge of creating and enhancing metadata. Some ideas the team will be considering include:

Related
RevolutionaryPHL: An Inside look at the Stakeholder Team