January 23, 2023
Share
Paul Sutherland is an archivist and linguist at CNAIR. As a linguist he specializes in endangered language documentation and community-oriented... END_OF_DOCUMENT_TOKEN_TO_BE_REPLACED 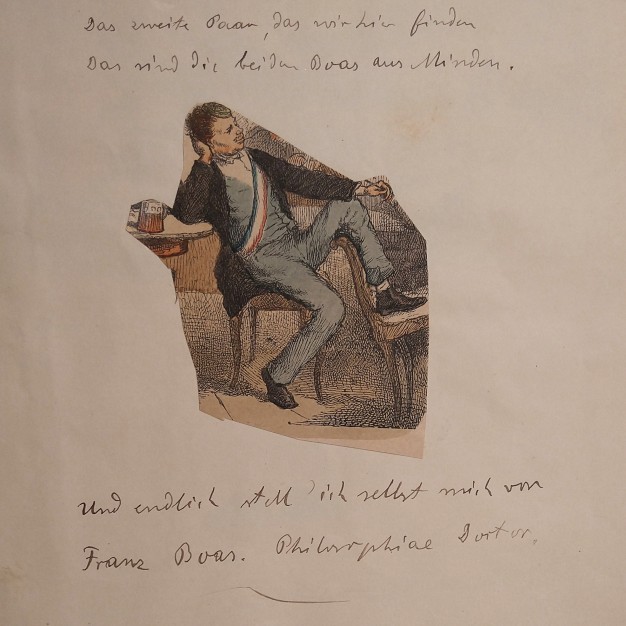 The two largest Boas-related collections at the American Philosophical Society are fairly clear in scope and frequently consulted. The American Council of Learned Societies Collection (Mss.497.3.B63c) contains a vast amount of original research notes on many languages and cultures of primarily North America, as well as some of Africa and Siberia. A great many of these notes were produced by colleagues and students of Boas, including Indigenous scholars Ella Deloria and George Hunt. The Franz Boas Papers (Mss.B.B61) has 59 linear feet of fully-digitized professional correspondence—an important reference work for our own cataloging—and a series of mostly personal photographs.

However, beyond these are several other similarly-titled collections with often overlapping scope and, until recently, many other impediments to their use. This reflects a 60-year history of new accessions, changing description and lending practices, unfinished projects, the transition from index card files to online finding aids, and consequential merging and splitting of series and collections.

Three Boas collections-–the Franz Boas Personal and Professional Papers (Mss.B.B61p), Boas Family Papers (Mss.B.B61f), and Boas-Rukeyser Papers (Mss.B.B61ru)–-still had three major needs. The first was housing: the collections were in flimsy paper folders that did not support the contents, leading to bending and difficulty paging. The boxes were also old, discolored, and falling apart.

The second need was rearrangement and redescription. These collections were last processed at a time when flat arrangement was common at the APS, meaning that manuscripts were not grouped into series by theme or material type, but listed entirely alphabetically. This works well for a collection that contains only correspondence, but for a very mixed collection, it obscures the presence of varied materials. Additionally, some materials were misidentified or under-described.

The third need was to note the existence of a large amount of entirely undescribed accessions. Boas's descendants, especially grandson Norman Boas (whose 2004 biography offers a personal view of Franz), sent the APS a steady stream of materials relating to Boas well into the 2000s, many of which sat on shelves adjacent to the collections waiting to be described. Daughter Helene Yampolsky undertook a project around 1960 to index and translate (from German) correspondence within the collections. She passed away before being able to complete the project, and her indexes and notes were adjacent to the collections or in APS-internal collection files. These indexes are now available to browse within the collections, and include many details never transferred to the finding aids.

The reprocessing project was initially supposed to take one day (at a stretch–two at most), and have us fix just one collection, the Franz Boas Personal and Professional Papers (Mss.B.B61p). Of all the other Boas collections, this was the most difficult to navigate: they had no series, and contained material that overlapped with every other collection-–original research notes, diaries, family correspondence, professional correspondence, photographs, and extensive articles by Boas illustrating his views on race.

Curator of Indigenous Materials Brian Carpenter had rearranged the finding aid for the Franz Boas Personal and Professional Papers into five or six series, and he and I picked a day in April 2022 to rearrange the collection physically into this new order. We thought a few titles would need changing. We did not plan to address the mystery boxes at the end of the collections (the third need). As we progressed, though, it became increasingly obvious that this was an opportunity to locate and make sense of–-or at least acknowledge—all the Boas materials, apparently for the first time.

The new plan: I would add all miscellaneous Boas accessions to the Franz Boas Personal and Professional Papers (Mss.B.B61p). This collection had the widest scope by far, and had become the de facto home for previous accessions. It certainly remains an imperfectly described collection, but hopefully easier to navigate, with several newly identified gems. Other collections would also get rehoused and arranged into series to match the groupings of materials present. These were the Boas Family Papers (Mss.B.B61f) (German-language correspondence between Boas and family members) and the Boas-Rukeyser Papers (Mss.B.B61ru) (materials collected, and some probably removed from the APS for a period of time and later returned, for a biography of Boas by Muriel Rukeyser).

Finally, the Boas Family Papers (Mss.B.B61f) Series V-VII finding aid now also describes two boxes of English translations of family letters, a large index likely by Helene Yampolsky, and several more linear feet of original bound letters. Unfortunately, physical space constraints meant I could not unpack these into folders, so they will need to be addressed another time—more work for future archivists!