February 13, 2018
Share
David Gary is the Associate Director of Collections and builds, interprets, and protects the Society's collections of books, pamphlets, broadside... END_OF_DOCUMENT_TOKEN_TO_BE_REPLACED 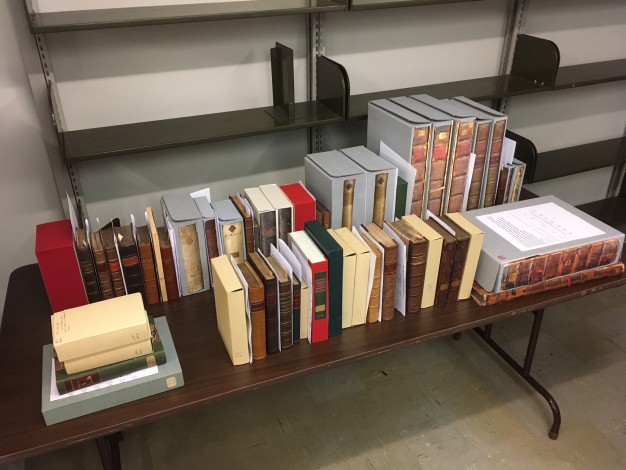 The American Philosophical Society’s book collecting was slow for the first sixty years of its existence with only a few hundred volumes adorning its shelves in 1799.  That changed in 1803 when John Vaughan (APS 1784) was appointed the Society’s Librarian.  He brought much needed energy to the acquisition of printed material and would serve as Librarian until his death in 1841.  By the end of those nearly four decades, the Society’s collection grew to 13,000 volumes.  Vaughan networked widely to build the APS’s library, but his efforts to acquire previously unknown cache of books once owned by the scientist, linguist, and radical thinker Joseph Priestley (APS 1785) stands out.

Priestley, a scientist involved with the discovery of oxygen, among other scientific findings, moved to Northumberland County, Pennsylvania, in 1794 after political pressure forced him to leave Britain.  The move took Priestley out of the most current scientific debates in Britain, but he did keep up through his association with the APS as well as prolific book buying.  He died in 1804, and after a failed attempt to place the library with a local school, the Philadelphia bookseller Thomas Dobson eventually acquired the collection and issued a catalog  with over 1,800 titles in 1816.  Vaughan bought from the catalog at an unknown date, but the APS Minutes over 1820-1822 note he “presented” some of Priestley’s books to the Library.  Most likely, Vaughan bought books from Dobson for his personal collection and later donated them to the APS, although it’s possible Vaughan was reimbursed for them.

Regardless, Vaughan purchased 56 titles and 29 bound volumes of tracts for just over $218 according to a notebook in the APS Archive titled “Bills of Parcels of Books 1815-1821” (A transcript of the pages of the Priestley purchase can be read here).  Only 40 titles in 52 volumes (not including the tracts) can be identified at the APS today.  It seems that APS incorporated the tracts into its pamphlet collections since many pamphlets in the collection bear traces of Priestley provenance (for an example, see here).  The books Vaughan presented to the APS range in publication date from the 16th to the late 18th centuries and unsurprisingly cover the areas of science (including several works on electricity), language, travel, and history.  Some intriguing works include John Blair’s Chronology and History of the World, from the Creation to the Year of Christ, 1788 (London, 1788), an important volume that touches on Priestley’s well known interest in the use of timelines in the classroom, as well as Oratio Dominca (London, 1713), which offers the Lord’s Prayer translated into 100 languages.  This discovery, along with around 100 Priestley-owned volumes at the Library Company of Philadelphia and the Historical Society of Pennsylvania, makes a trip to Philadelphia a must for anyone studying the life of Priestley and his ideas.