April 4, 2022
Share
Valerie-Anne Lutz is Assistant Librarian and Head of Manuscripts Processing, where she supervises a team of archivists who make new... END_OF_DOCUMENT_TOKEN_TO_BE_REPLACED 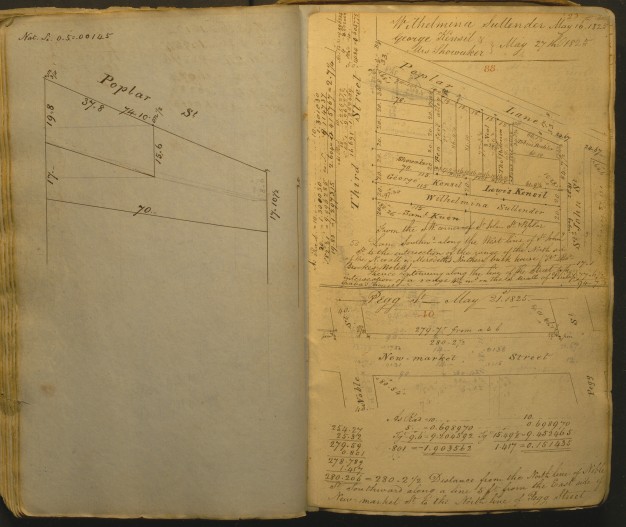 The volume includes pages of plat maps, showing multiple land parcels at street intersections, some of which are recognizable with street names still used today. Others include streets that have since been renamed or which, in some cases, no longer exist.

An interesting and potentially useful feature of the volume is its inclusion of property owners’ names. This enables researchers to connect these names with records such as deeds, the 1820 and 1830 censuses, church records, and other sources to learn more about the people who lived in Northern Liberties in the early 19th century.

An example is this view of the intersection of Third and Poplar Streets. The number of names on this block provides many possibilities for additional research.

In the center of the tract are the properties of George Kensil and Lewis Kensil. In the 1830 census is a Lewis Kensil with four persons in the household: one male age 40 to 49 (presumably Lewis), one female under age 5 (possibly a daughter or granddaughter), one female 20 to 29 (possibly a daughter), and one female age 30 to 39 (possibly his wife). The George Kensil household could be that of George and Catherine Kensil, born in 1790 and 1793. George lived until 1861 and Catherine until 1876.

The information obtained by using the map and will together also could be useful for the location of privies for archaeological purposes–assuming that the current property owners are agreeable and that this portion of the property does not include buildings that they intend to continue using.

The Northern Liberties Plat Book was deposited at the American Philosophical Society by Roy Goodman, former APS Curator of Printed Materials, in 1984.