November 20, 2020
Share
Valerie-Anne Lutz is Head of Manuscripts Processing, where she supervises a team of archivists who make new collections available. Val... END_OF_DOCUMENT_TOKEN_TO_BE_REPLACED 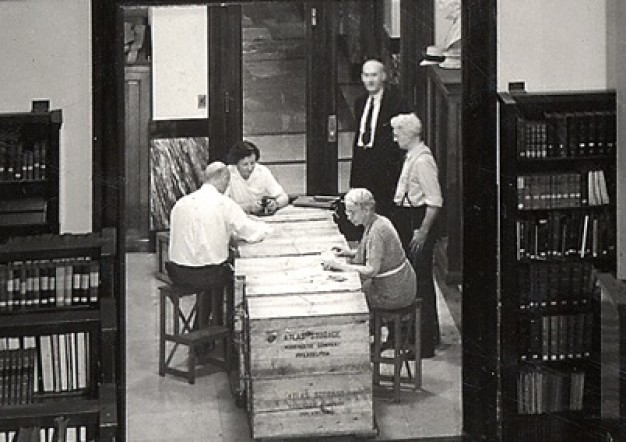 Few people, even among APS staff, know about Laura E. Hanson, Librarian of the American Philosophical Society from 1926 to 1941. Hanson was not only the first (and, so far, only) director of the APS's Library who was also a woman, but was also the first APS staff member to hold a degree from a school of library science (Drexel University, 1897).

Born in 1871 in Philadelphia to George and Eliza Hanson, she was the oldest of five children. Her father was a Civil War Union veteran and co-owner of Mumford & Hanson, an electrotype printing company at 704 Sansom Street in Philadelphia. During Hanson’s childhood, she and her family lived in West Philadelphia at 4806 Silverton Avenue, along with her father’s brothers Charles and Edward, and three servants.

Hanson attended Drexel Institute of Art, Science, and Industry (now Drexel University) in its first decade and graduated in 1897 with a degree in library science. By 1900, her family had moved to Lower Merion Township. Hanson’s brothers Alfred, George, and Louis joined their father in the electrotype business. Hanson, her sister Lucy, and their mother were not working outside the home.

Hanson worked in libraries for several years prior to her work at APS, including the Public School Library of Camden, Haverford College, the Apprentices’ Library of Philadelphia, and the College of Physicians Library. APS Librarian I. Minis Hays hired Hanson as an assistant. Hays had devoted much of the previous 18 years to improving APS's cataloging practices. As part of his efforts, he hired professional staff, including Hanson.

After Hays’ retirement in 1922, Hanson continued to run the Library under the guidance of the Library Committee, headed by Hays. She was appointed Librarian on November 20, 1926. During her tenure as Librarian, the APS went on to hire a number of women. Among the women hired at this time were assistant librarians Mabel Ryland and Gertrude D. Hess (who later became an associate librarian), library staff Ruth A. Duncan (who later became a reference librarian), Mary C. Dothard, and restorer of manuscripts and books Carolyn Price Horton. The APS also hired several women in the administrative offices during this time, including Julia Noonan, Caroline Rulon-Miller Skinker, Maria Landreth, and Marie Richards.

As Librarian, Hanson also pushed the APS to undertake several major advances in professional library practice. For example, beginning in 1930, Hanson and her staff housed the collections in acid-neutral folders to protect materials. Hanson also oversaw the first major move of the Library in 1934 from its cramped quarters in Philosophical Hall to the Drexel Building, which stood on the current footprint of today’s Library Hall. Unfortunately, this historic move coincided with the death of her mother in 1933, meaning Hanson had to cope with immense loss during the move’s preliminary stages.

During Hanson’s tenure, the Library also acquired additional papers of Benjamin Franklin and the Franklin-Bache Family, which the staff arranged and cataloged. In 1939, Hanson and her staff arranged the manuscript material held in the Library into separate categories of Archives and Manuscripts. The Archives material included APS records and correspondence, while Manuscripts consisted of collections of papers to or from particular individuals. To better facilitate research, Hanson and her staff rearranged the catalog cards in accordance with modern library practice, with a minimum of three cards: one for a chronological file and one each for the author and recipient, with other cross-reference cards for subjects and enclosures when needed.

Under Hanson’s direction, the Library also became one of the first to microfilm its collections for preservation and security purposes, and to make them available for scholars. In 1941, shortly after Hanson’s retirement, Ruth Franckens was hired to microfilm the Franklin Papers.

Unlike her predecessors and successors, Hanson was primarily a professional librarian rather than a scholar. From what we can glean of her years at APS, she focused on the daily work of maintaining the library rather than scholarly interests or committee work. As Julia Noonan, a former executive assistant at APS for several decades, recalled, Hanson was “short, very friendly-looking, white hair, very lovely person, very quiet, very retiring. She paid attention to the library. She had no say in anything but the library business.”

Hanson was, however, involved with professional library organizations. During her tenure, APS joined the Society of American Archivists in 1936, the year it was founded. She served as treasurer for the Special Libraries Association and was a member of its Science and Technology Group. She also was a member of the American Library Association and attended conferences. She also hosted at least one meeting of the Special Libraries Association at APS in May of 1929, at which she gave a talk on the history of the APS and showed numerous “treasures” from the collection to attendees.

Still, correspondence during Hanson’s tenure tends to relate almost entirely to library work and business, while the correspondence of previous and subsequent librarians reflects their more diverse interests. Hanson was also the only APS Librarian not elected to Membership.

As little survives of her work or writing beyond routine letters and reports, we can only speculate as to why she focused on library work rather than pursuing scholarly interests or taking a greater role in policy direction, as most APS Librarians have. As I. Minis Hays’ former assistant, she might have felt an obligation to continue to focus on library work and accept direction from APS Members. And as an unmarried woman who was the sole support for herself and her mother during much of her career at APS, she might have lacked the time, resources, and opportunities for scholarly pursuits beyond her daily work at APS. Any other interests that she might have had did not result in known scholarly publications and are not documented within the APS Archives.

Most telling, however, is Julia Noonan’s observation that “She had no say in anything but the library business.” Based on Hanson’s previous role as I. Minis Hays’ assistant, the APS might have viewed her as a staff member who required direction, rather than as a scholar who could pursue her own vision for the library and interests beyond it. And of course she was also a woman in an institution run by and almost entirely for men in the first half of the 20th century.

What we do know is that she oversaw and guided the APS's Library during a decade in which it expanded and implemented professional library practice, began serious efforts to preserve and restore documents, and hired several women for the first time. Upon her retirement in June 1941, the APS staff presented Hanson with a certificate signed by 10 staff members, honoring her 25 years of service.

During her later years at APS, Hanson lived with another librarian, Frances Warn, and Warn’s daughter Ellen in an apartment at 4418 Spruce Street, now Concord Hall Apartments. At the time of her death in 1948, she lived at 4019 Pine Street. She is buried with her parents at Westminster Cemetery in Bala Cynwyd.