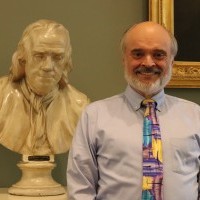 Charles Greifenstein is in charge of researcher services, the manuscript department, and security policies. He has an MA in English... END_OF_DOCUMENT_TOKEN_TO_BE_REPLACED
Tags
Benjamin Franklin 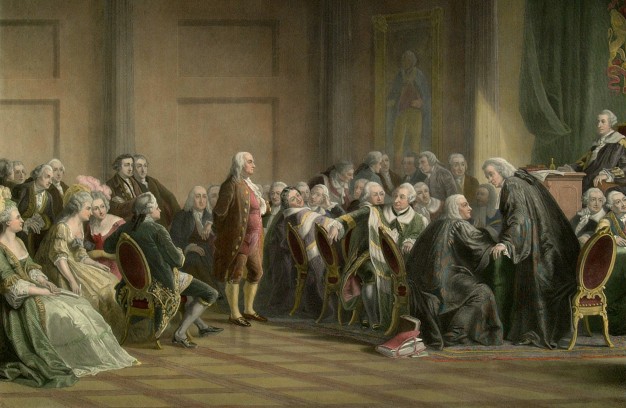 Benjamin Franklin thought of himself as British. Yes, he was born in America, and certainly some of his identity was that of an American, but his America was part of the British Empire. Franklin was a British subject.

By 1774, with dissatisfaction with British rule in America growing, Franklin, Postmaster of the Colonies and agent for the colony of Massachusetts, was in England, using his influence and writings to urge compromise between dissatisfied and distrustful Americans and the British government.

January 29, 1774, turned Franklin from a conciliator into a revolutionary.

On that day, Franklin appeared before the Privy Council supposedly to hear if the British government would approve a petition by Massachusetts to replace the current governor, Thomas Hutchinson, and lieutenant governor, Andrew Oliver. The two men had exchanged letters in which they floated ideas of how to control the agitation in Massachusetts, including the suggestion that some of their “English liberties” be curtailed. The letters came into Franklin’s possession—to this day it is not certain who gave them to him—who sent them to Thomas Cushing, speaker of the Massachusetts Assembly. Despite Franklin’s wish that the letters remain closely guarded, their content got out, further angering the colonists and spurring the recall petition.

Franklin appeared in the Cockpit, so named because cock fights occurred there during the reign of Henry VIII. Alexander Wedderburn, solicitor general, spoke for the government. Wedderburn was a competent, ambitious Scot who could bend with the political winds in the service of his king. It was said that he had “something about him which even treachery cannot trust,” that he was stiff and pompous in conversation, that he “seldom did anything without a reason.” His demeanor in public was usually cold and detached.

The meeting was well-attended by distinguished people, mostly sympathetic to the government’s position. Franklin had some distinguished supporters of his own, including Edmund Burke and Joseph Priestley.

Wedderburn spoke for over an hour, not about the merits of the petition but about the letters, Massachusetts, and Franklin’s character. “Private correspondence has hitherto been held sacred,” he bellowed. Franklin “has forfeited all the respect of societies and of men.” “He will henceforth call it a libel to be called a man of letters,” a pun on Franklin’s position as postmaster. Wedderburn declared, with a sly reference to Franklin’s experiments with electricity, that he “stands in the light of the first mover and prime conductor of this whole contrivance against his Majesty’s two Governors” and accused Franklin and the radical coterie in Massachusetts of spreading sedition.

Through it all, Franklin stood still, showing no emotion, “conspicuously erect, without the smallest movement of any part of his body,” his unchanging expression tranquil and placid. His dignity and forbearance made him the strongest presence in a room full of powerful men.

After the diatribe, Wedderburn declared that he was ready to examine the witness, Franklin replied that he did not chose to be examined. After the chamber was cleared of spectators, the Privy Council turned down the petition.

The attack on Franklin was almost too much for him to bear. But then he learned the next day that he had been removed as postmaster, he was furious. His character had been attacked, his work for conciliation ignored, his contributions to efficient government in the colonies dismissed. From then on, Franklin would work for American independence.

It was a long and fearsome struggle, with thousands of people making independence possible. Franklin did more than almost anyone to win the fight. He led the delegation that secured French money and arms and negotiated the Treaty of Alliance that brought the French military into the conflict. Without French assistance, it is very doubtful that America would have won independence.

We have Alexander Wedderburn, first earl of Rosslyn, to thank for it.

Header Image: "Franklin Before the Lords of Council, 1774", Christian Schussele, n.d. Can be found in the APS Digital Library here.