Samuel Fahlberg, a Swedish Man of Letters in the Caribbean

August 28, 2018
Share
Madalina Veres is the Postdoctoral Fellow in Digital History at the APS and an historian of the Habsburg Monarchy in... END_OF_DOCUMENT_TOKEN_TO_BE_REPLACED 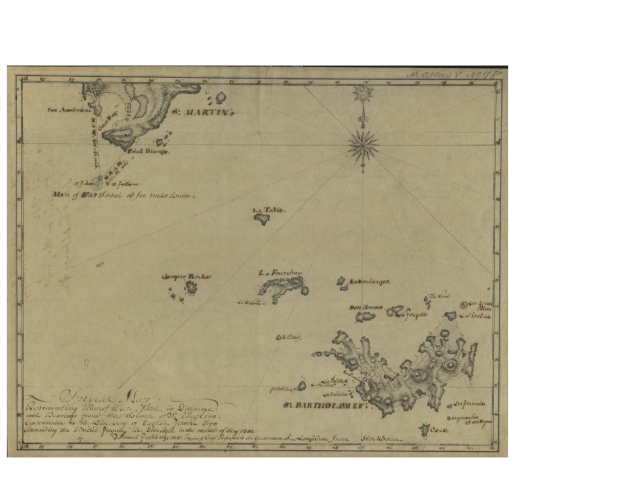 On April 16, 1802, the Swedish pastor Nicholas Collin (APS 1789) sent the American Philosophical Society a manuscript map by Samuel Fahlberg (1758-1834), displaying the location of a dangerous shoal or coral reef in the proximity of the Caribbean Saint Martin Island. At sea, such an unexpected deposit of sediments was often a danger to navigation. Indeed, the British frigate the Proselyte, the discoverer of this formation, “ran aground on that shoal” in May 1801. Therefore, Fahlberg decided to prepare a map “for the benefit of the many American vessels that trade to that part of the West Indies” and to send it to Philadelphia. Considering the close connections and overlap between the scientific and merchant communities in Philadelphia at the time, Fahlberg’s map was probably more than an aesthetic addition to the Society’s collections.

The story of Fahlberg’s dispatches to the American Philosophical Society exemplifies how the American Philosophical Society strived from the beginning to build an international network of collaborators and collect useful scientific information. Moreover, it provides a glimpse into the career of one of the early members of the Society. Elected on January 16, 1801, Fahlberg expressed his gratitude promptly, by sending to the Society a map of Saint Barthélemy and its vicinity. This regional map paid special attention to the channels and routes connecting the Caribbean islands from Saint Barthélemy to Dog and Prickle Pear, and revealed the competing European interests in the area: the Swedish island of Saint Barthélemy, the British island of Anguilla, and the Dutch-French Saint Martin.

At the same time, the map reflects Fahlberg’s role in the service of the Swedish government. In 1784, France exchanged the island of Saint Barthélemy for trading rights in the Swedish port of Gothenburg, and Fahlberg was dispatched at the end of the year to this site. The transition from French to Swedish possession explains why the main town on Saint Barthélemy appears with two toponyms on Fahlberg’s map: the French Le Carenage and the Swedish Gustavia.

Dedicated to the Royal Swedish Academy of Sciences and published in Stockholm in 1792, Fahlberg most likely envisioned his map of Saint Barthélemy and its neighboring islands as a stepping stone in his quest for intellectual recognition in the Republic of Letters. A man of many talents, he spent his time in the Caribbean combatting smallpox epidemics, collecting historical artifacts and studying natural specimens. Fahlberg made a name for himself not only as a mapmaker, but also through his studies of the electric eel, known as the time as Gymnotus Electricus. According to Alexander von Humboldt, Fahlberg and another APS member, Hugh Williamson showed the capacity of the eel to generate electric current, and the Swede even generated a visible electric spark from the eel. The Society’s collections preserve Fahlberg’s 1801 description of electric eels and other materials on similar experiments, very popular at the time among APS members, including Benjamin Franklin.

In his 1802 message to the Society, the Swede promised a series of observations on the natural history and the diseases of Saint Martin and Saint Barthélemy. And even though this project did not materialize, Fahlberg’s maps and treatise on electric eels confirm his status as a full-fledged member of the transatlantic intellectual community of his time.