Charles Greifenstein is in charge of researcher services, the manuscript department, and security policies. He has an MA in English... END_OF_DOCUMENT_TOKEN_TO_BE_REPLACED 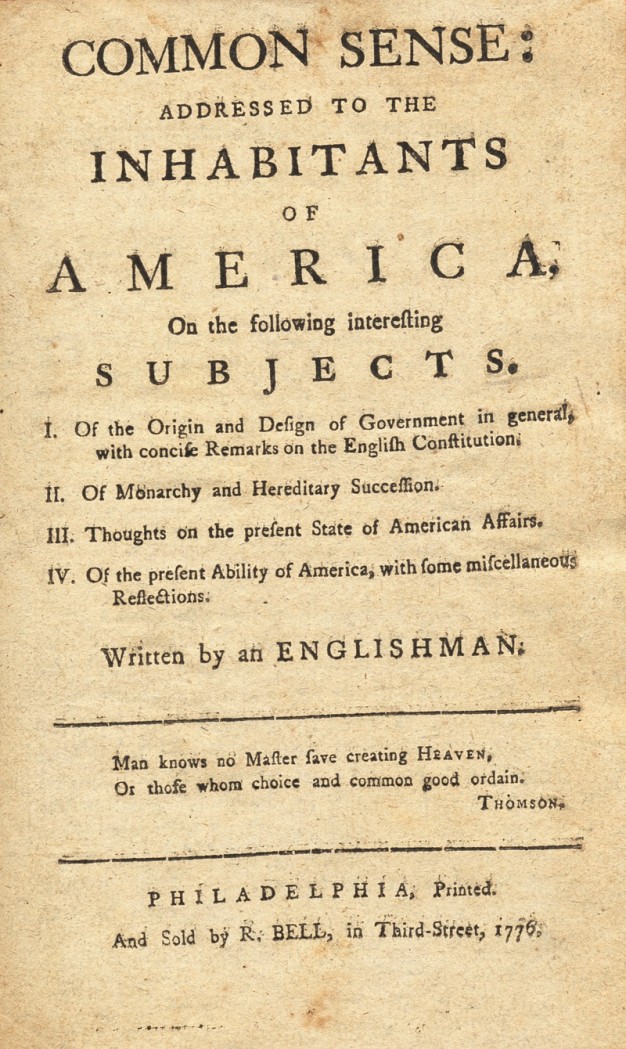 Benjamin Rush had been a Member of the APS for six years when he met Thomas Paine. In 1774 Benjamin Rush was clearly a man on the move. After a medical apprenticeship in Philadelphia, he earned a medical degree in Edinburgh in 1768, then perhaps Europe’s most prestigious medical school, and began his medical practice in Philadelphia, largely at this point among poorer citizens. But he had an appointment as chemistry professor at the College of Philadelphia (now the University of Pennsylvania). He’d met Franklin in England and was an active member of the APS. Rush was strongly republican and among those who supported separating from England as did his friends John Adams, David Rittenhouse, and Samuel Adams.

In 1774 Thomas Paine arrived in America a failure. Some years earlier, his first wife died in childbirth. For years he’d hopped between jobs. He was fired from a government post in the excise office. He was eventually rehired but fired again for absenteeism. He filed for official separation from his second wife. He had written his first political tract, participated in local affairs and almost certainly read such free thinkers as Joseph Priestley, but when he decided to emigrate, he was without a job, without a family and nearly broke. He was 37.

One piece of good fortune was that a commissioner of excise convinced Benjamin Franklin to write a letter of introduction; Franklin likely recognized Paine’s writing ability. In Philadelphia, Paine was hired by printer Robert Aitken, and Paine, as editor of Aiken’s Pennsylvania Magazine, quickly turned the periodical around with the then-innovative approach of publishing American-created content, much written by Paine.

Rush met Paine in Aitken’s shop. They were drawn together because of their strong belief in representative government. Rush, aware of Paine’s facility, urged him to write a pamphlet about why separation from England was necessary. Paine agreed. According to Rush’s autobiography, Paine brought Rush parts of the pamphlet as they were completed. Rush suggested a publisher, Robert Bell, a colorful Philadelphian, Scottish by birth and a supporter of independence. Under the title Rush suggested, Bell published Common Sense. It was an immediate sensation. An estimated 150,000 copies were printed by various publishers in 1776 alone. On the strength of his contributions to the Patriot cause (and, a fact not known by many today, because of Paine’s interest in applied science, including his designing bridges in both England and Philadelphia), Paine was elected to the APS in 1785.

The Revolution was a heady time for both men. Both worked hard for the Patriot cause, both were involved in controversies. Rush, however, eventually became more conservative in his views, an establishment figure and internationally known physician who yet advocated numerous social reforms, such as the abolition of slavery and an end to capital punishment. Paine remained ever the warrior fighting kings and tyranny. He served in the Convention during the French Revolution, though his English birth and lack of support for Louis’ execution eventually got him thrown in prison. While in prison he composed The Age of Reason, with its attack on organized religion and its doctrinaire bent. This work and a public attack on George Washington for not working to get him out of prison (the APS has an original copy of an abusive letter to Washington) caused most of Paine’s supporters to desert him. Upon Paine’s death in 1809, Rush wrote in his commonplace book that “[Paine’s] ‘Age of Reason’ probably perverted more persons from the Christian faith than any book that ever was written for the same purpose.”

But together, in early 1776, Paine and Rush cooperated to produce a work that did more than any other to push the American colonies to seek independence. And, notably, the APS holds what is probably the largest collection of Thomas Paine material in the world, donated to the APS by Col. Richard Gimbel.