The Barton Butterfly, circa 1812

February 21, 2019
Share
Valerie-Anne Lutz is Head of Manuscripts Processing, where she supervises a team of archivists who make new collections available. Val... END_OF_DOCUMENT_TOKEN_TO_BE_REPLACED 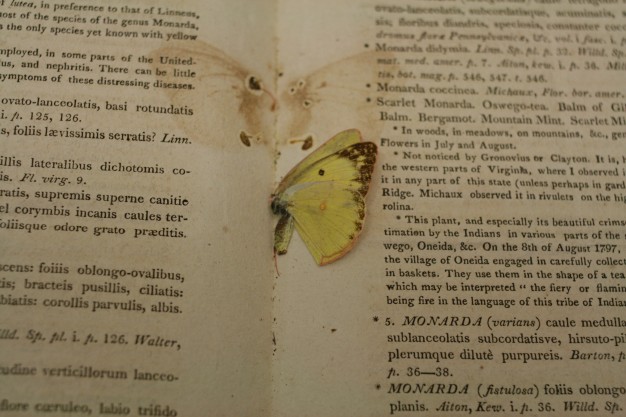 Preserved between the pages of a pamphlet in the APS Library is a small yellow butterfly, which may have been placed there over 200 years ago.

APS Library fellow E. Bennett Jones was paging through a partial pamphlet among the notes of physician and natural historian Benjamin Smith Barton at the APS Library and noticed something unusual: a small yellow butterfly, intact except for being folded with both wings together. Above it was a small brown stain in the shape of a butterfly across the two facing pages. 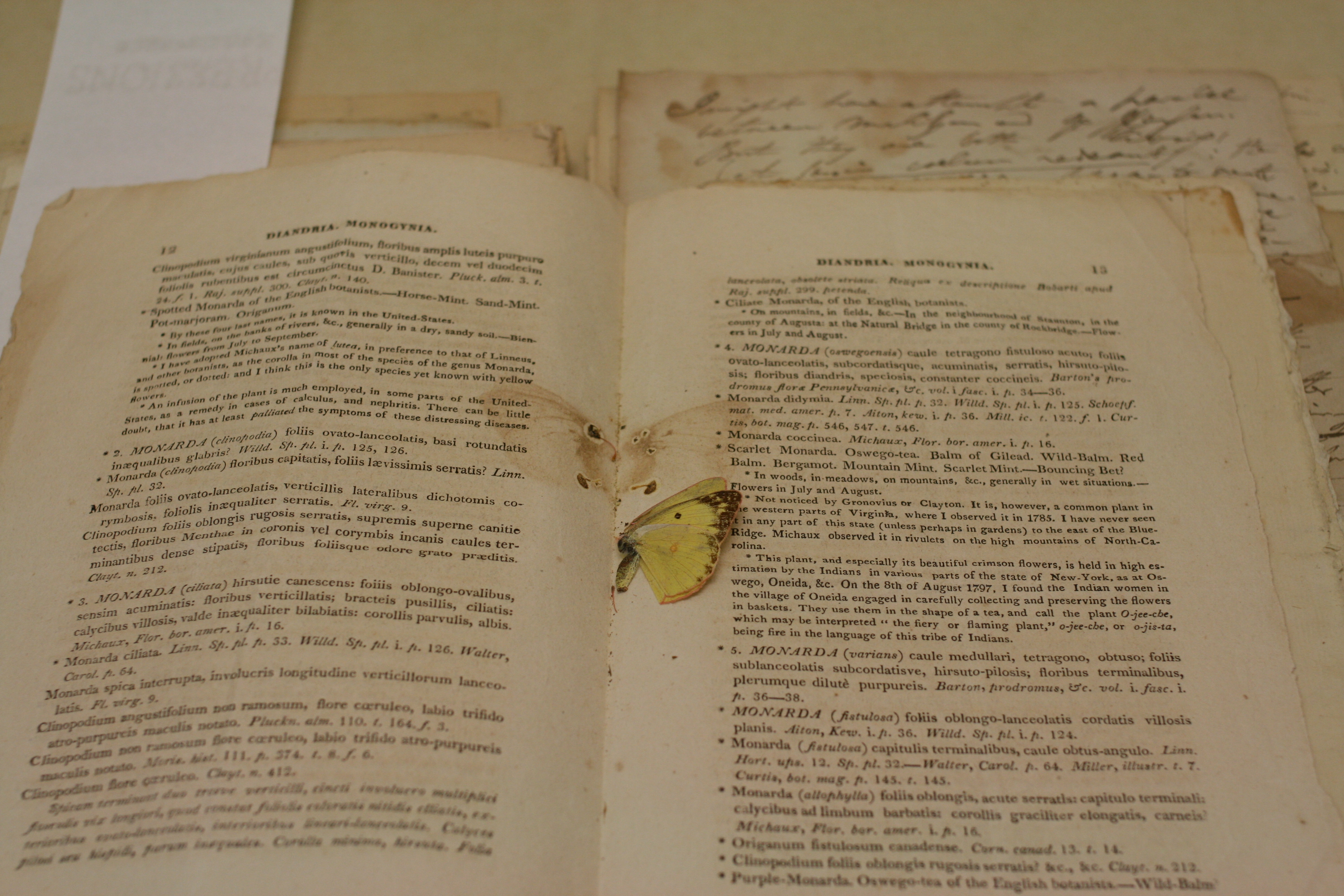 Intrigued by the find, Dr. Jones brought the butterfly to my attention and noted that the pamphlet appeared to be a portion of Barton’s Flora Virginica (1812). Based on a comparison of the text, I determined that it was indeed a portion of this book.

After posting a photo of the butterfly on Facebook, I received comments from two butterfly aficionados, Mark Holland and Monica Borrin Flint, who had been tagged in the post by a friend. Holland said that it looked like a lesser albatross, or Appias wardii, a small butterfly of the family Pieridae, or yellows and whites, which is found in India.  Flint noted that it was interesting that the pages listed “plants beloved by pollinators such as monarda. A botanical book. No coincidence the butterfly was placed here.”

A comparison with images of the Appias genus shows similarities. It is not known whether Barton placed the butterfly there or whether it was done later by a family member before the papers arrived at the APS.

The primary concern of APS staff was to find a way to properly house and keep intact the remains of this small creature. Its survival, possibly for 200 years, without any housing other than the pages of the pamphlet, was against all odds. We did not want to take the chance that a future quick turn of a page or handling the pamphlet upright could cause the butterfly to fall out and/or crumble. We also wanted to preserve the record of the location in which it was found, preferably by housing the butterfly with the item in which it was found.

Head conservator Anne Downey researched several options and found a solution: a suspension storage box, to be placed in a conservation board housing with the pamphlet. Ms. Downey removed the butterfly from the pamphlet by gently lifting from below with closed tweezers and placing it in the suspension storage box, which includes a raised bed that holds the butterfly in place, flat against the top lid when it is closed.

The butterfly now may be viewed with the pamphlet, without any danger to the integrity of its wings. 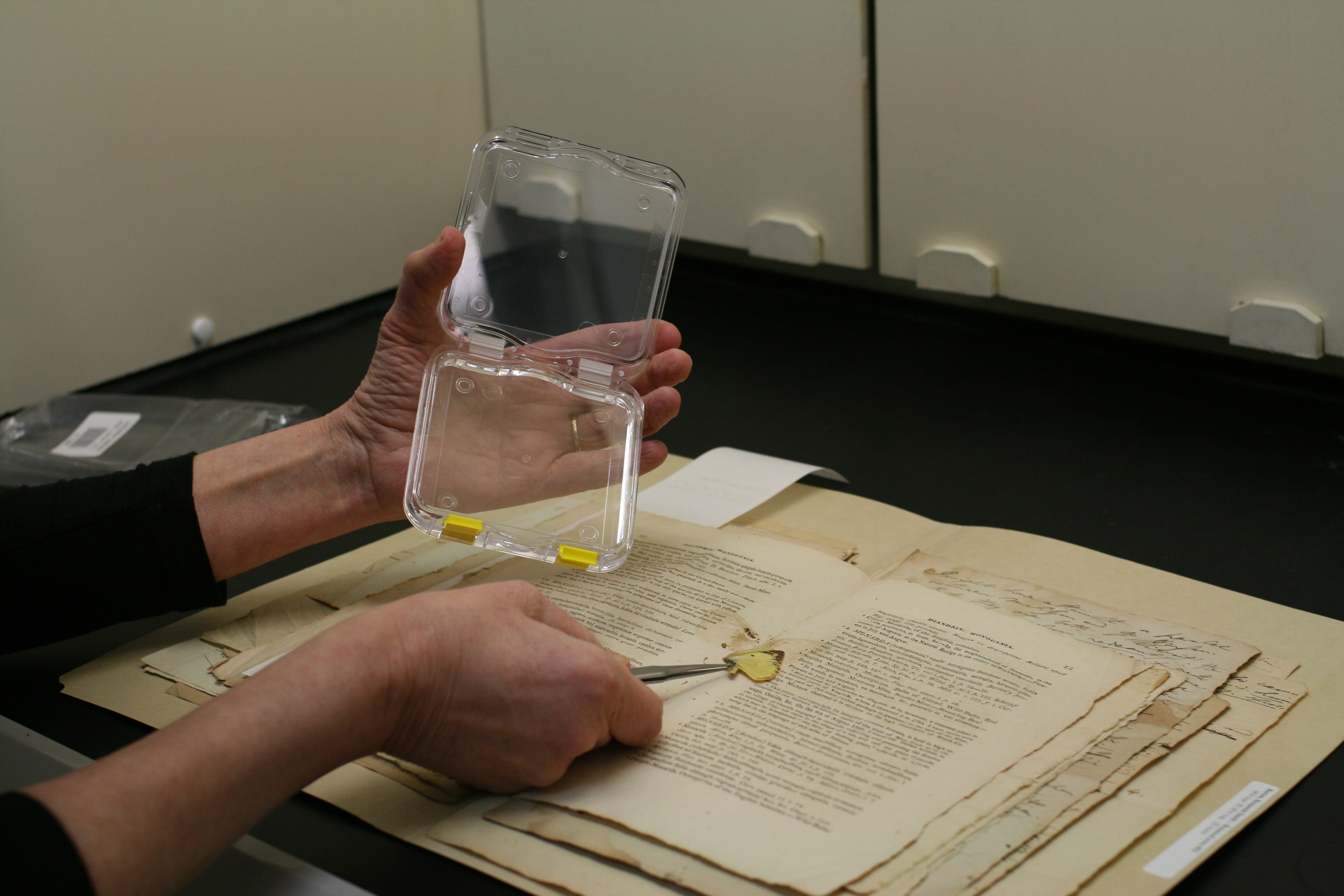 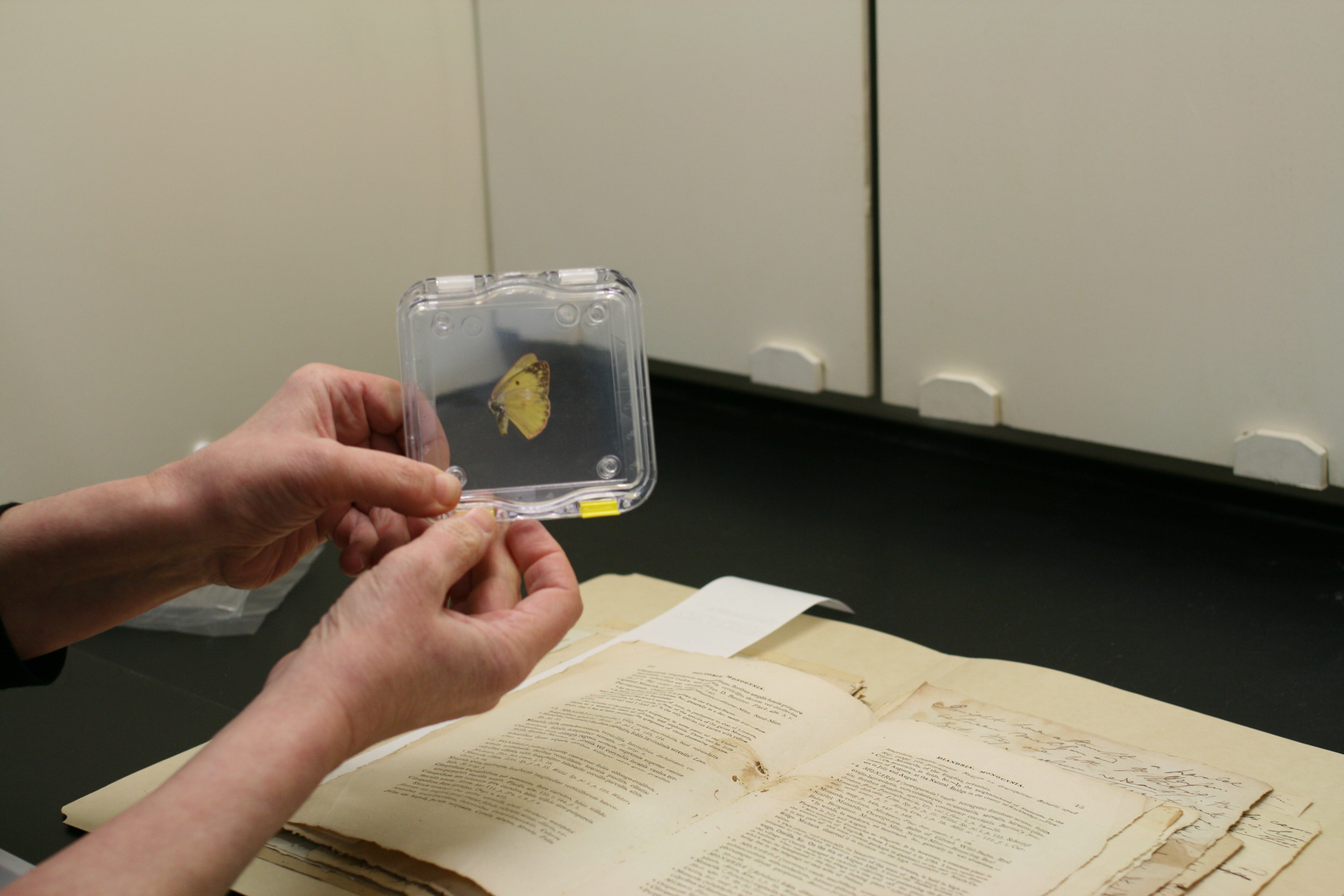