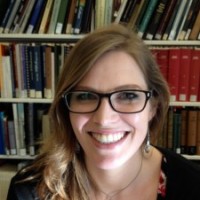 Diana Marsh received a B.F.A. in Visual Art (photography) and a double major in Cultural Anthropology from the Mason Gross School of the Arts at Rutgers University in 2009. She completed an MPhil. in Social Anthropology with a Museums and Heritage focus at Cambridge in 2010 and a Ph.D. in Anthropology at the University of British Columbia (UBC) in 2014, where she conducted ethnographic and historical research on fossil exhibits at the Smithsonian. Previously, she was a Postdoctoral Fellow in Museum Anthropology at UBC.

Dr. Marsh joined the American Philosophical Society in 2015 as an Andrew W. Mellon Foundation Post-Doctoral Curatorial Fellow. She was co-curator on the 2016 exhibition Gathering Voices: Thomas Jefferson and Native America and the lead curator on Curious Revolutionaries: The Peales of Philadelphia. In her research time, she will continue a research project with the Smithsonian and the University of Maryland on the impact of ethnographic digitization projects and publish her dissertation work.