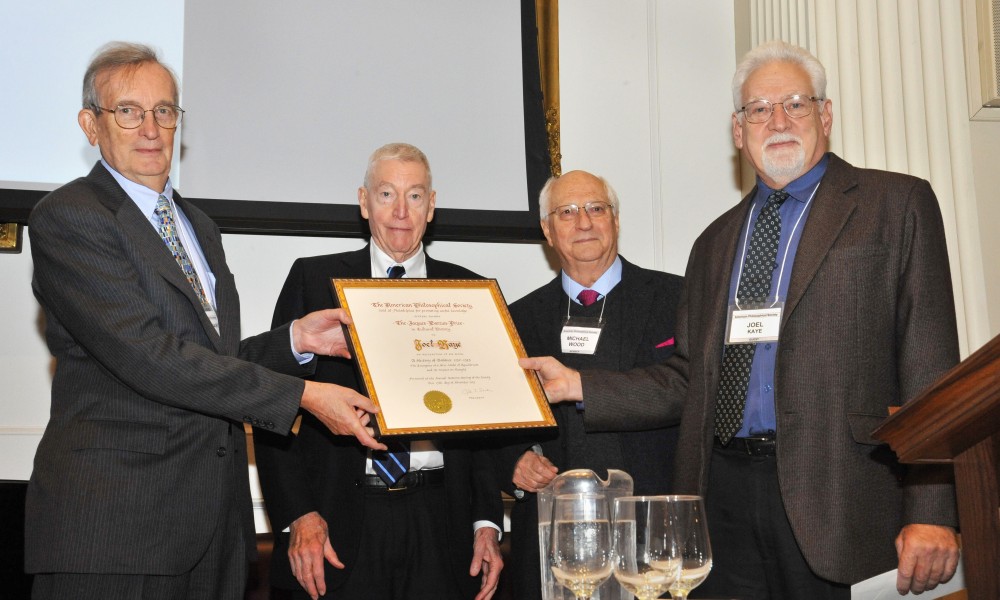 Send one copy of the book to each member of the prize committee (total of three copies):

2022
Elizabeth D. Samet in recognition of her book, Looking for the Good War: American Amnesia and the Violent Pursuit of Happiness (Farrar, Straus and Giroux).  To be presented at the American Philosophical Society's November 2022 Meeting.

2020
Francesca Trivellato in recognition of her book The Promise and Peril of Credit (Princeton University Press).

2019
Sarah E. Igo in recognition of her book The Known Citizen: A History of Privacy in Modern America

2018
Catherine Gallagher in recognition of her book Telling It Like It Wasn't: The Counterfactual Imagination in History and Fiction (University of Chicago Press).

2017
Todd H. Weir in recognition of his book Secularism and Religion in Nineteenth-Century Germany: the Rise of the Fourth Confession (Cambridge University Press).

2015
Richard E. Payne in recognition of his book A State of Mixture: Christians, Zoroastrians, and Iranian Political Culture in Late Antiquity (University of California Press).

2013
Adelheid Voskuhl in recognition of her book Androids in the Enlightenment: Mechanics, Artisans, and Cultures of the Self (University of Chicago Press, 2013).

2012
Peter Brown in recognition of his book Through the Eye of a Needle: Wealth, the Fall of Rome, and the Making of Christianity in the West, 350-550 AD (Princeton University Press).

2009
Daniel Hobbins in recognition of his book Authorship and Publicity Before Print: Jean Gerson and the Transformation of Late Medieval Learning (University of Pennsylvania Press).

2007
Thomas E. Burman for his book Reading the Qur’an in Latin Christendom, 1140-1560 (University of Pennsylvania Press).

2006
Fritz Stern in recognition of his book Five Germanys I Have Known (Farrar, Straus and Giroux).

2005
Jacob Soll for his book Publishing The Prince: History, Reading, and the Birth of Political Criticism (University of Michigan Press).

2004
Bart Schultz, Fellow and Lecturer in the Department of Philosophy at the University of Chicago, in recognition of his book Henry Sidgwick - The Eye of the Universe: An Intellectual Biography, Cambridge University Press.This book is a comprehensive study of the great Victorian moral philosopher, author of Methods of Ethics, and influential writer on many subjects (including religion, politics, education, psychology, and parapsychology), placed in his social circle and in the culture of pre-Bloomsbury England.

2002
Robert E. Norton, professor and chair of German and Russian Languages and Literatures at the University of Notre Dame, in recognition of his book Secret Germany: Stefan George and His Circle, Cornell University Press.This book is a comprehensive and original study of the most influential, perhaps greatest, and in recent times most unappreciated poet of twentieth-century Germany. George was an ambivalent prophet and symbol of the true, "secret," and "sacred" Germany underlying modern bourgeois corruption. He "loved art as power," and he aspired indeed to turn poetry into reality in his imagined domain. He was a major presence as an author but even more as an arachnoid "master" and Führer of many poets, philosophers, artists, and historians of the Weimar Republic and, though his hubris kept him from participating in fascist politics before his death in 1933, as a cultural harbinger of the Third Reich.

1999
J.G.A. Pocock, Professor of History Emeritus, Johns Hopkins University, for Barbarism and Religion, 2 vols., Cambridge University Press. In the first volume, The Enlightenments of Edward Gibbon, the author distinguishes between the British, Swiss and French Enlightenments, and traces their influence on Gibbon's interpretation of the Christian millennium. In the second volume, Narratives of Civil Government, he compares Gibbon to other historians of his age, and follows Gibbon's narrative of the Roman empire, shaped by the forces of barbarism and religion.

1998
Maryanne Cline Horowitz, Professor of History, Occidental College, for Seeds of Virtue and Knowledge, Princeton University Press. The author traces the idea and image of the human mind as a garden, from the Greek Stoics and hellenistic Judaism, through early and later Christianity, to the Lutheran Reformation.

Philip D. Morgan, Professor of History, College of William and Mary, and Editor of The William and Mary Quarterly, for Slave Counterpoint, University of North Carolina Press.The author combines cultural, social, and economic history to recreate the external and inner life of African American slaves in eighteenth-century America.

1997
Jeffrey F. Hamburger, Professor, University of Toronto, for Nuns as Artists: The Visual Culture of a Medieval Convent, University of California Press. The subject is a group of devotional drawings made by a Benedictine nun around 1500 for other members of her community. The author shows what this type of art, often held in low esteem, can tell us about late medieval religious thought and spirituality.

Arnold Lewis, Professor of Art History Emeritus, College of Wooster, for An Early Encounter with Tomorrow: Europeans, Chicago's Loop and the World's Columbian Exposition, University of Illinois Press. The subject is the international importance of Chicago in the transformation of Western culture at the end of the nineteenth century. The author studies the collision between old world assumptions and new world realities.

1996
Dianne Sachko Macleod, Professor of Art History, University of California, Davis, for Art and the Victorian Middle Class: Money and the Making of Cultural Identity, Cambridge University Press.The author explores the collecting of art in Victorian England by newly wealthy members of the expanding middle classes. She analyzes the social and psychological motives of the collectors, the types of art they favored, and the impact they had on the British art world and British society.

1995
Caroline Walker Bynum, Morris and Alma Schapiro Professor of History, Columbia University, for The Resurrection of the Body in Western Christianity, 200-1336, Columbia University Press. The author traces the controversial history of the body from the patristic period to the thirteenth century, casting light on an aspect of culture neglected by social and intellectual historians.

1994
C. Stephen Jaeger, Professor of Germanics and Comparative Literature, University of Washington, for The Envy of Angels: Cathedral Schools and Social Ideals in Medieval Europe, 950-1200, University of Pennsylvania Press. The author studies the cathedral schools of France and Germany in the tenth and eleventh centuries, both as centers of learning and as conveyors of a new standard of behavior for the aristocracy, before the rise of the universities in the twelfth century.

James H. Johnson, Assistant Professor of History, Boston University, for Listening in Paris, University of California Press. The author examines the Parisian opera audiences of the eighteenth and early nineteenth centuries, analyzing their reactions to the performances, both in the context of history of music and in that of the history of cultural change.

John O'Malley, Distinguished Professor of Church History, Weston Jesuit School of Theology, for The First Jesuits, Harvard University Press/MIT Press. The author places the Jesuits in the cultural context of the sixteenth century. This new light shows the era in its own perspective and dispels long-held views about the Reformation, the Counter-Reformation, and the Jesuits.