Skip to main content
Historic Meteorological Records at the APS

The early colonial transatlantic seed trade started when the first colonists set foot on North American land. It grew and prospered over the course of the seventeenth and eighteenth centuries. Landowners, like James Madison, used the seed trade as a livelihood and for scientific study. Yet the seed trade also served other purposes: it was a tool of colonialist expansion as well as a lifeline for enslaved peoples to hold onto their own culture and botanical practices. The results of the early American seed trade can be seen today with the existence of botanical gardens, historic greenhouses, and European plants that have gradually naturalized into the North American environment. Learn more below.

This exhibit was designed and written by Molly Nebiolo. Ms. Nebiolo is a PhD candidate at Northeastern University, and was an Experiential Fellow for the Center for Digital Scholarship this summer.

History of the Seed Trade

The early colonial transatlantic seed trade began with the first colonial voyage to the continent. In the seventeenth century, colonists imported seeds from England to survive on the foods they were accustomed to eating. One of the earliest expeditions to Plymouth Plantation, in 1628, includes a list of seeds brought over from England. These plants included wheat, rye, barley, cherries, peaches, apples, and potatoes.1

After the first settlements took root, the seed trade grew. European plants were naturalized to American environments as generations of settlers farmed the land. This made finding seeds and harvesting European plants an easier task for landowners. More ships in the Atlantic Ocean also led to more people immigrating to America from Europe, which increased the supply and demand for seeds from all over the world. These changes saved landowners time and money that they used for other pastimes in their garden.

Instead of just growing what was necessary, landowners bought plants to study in their own backyards. This hobby was mostly practiced by the middle- and upper-classes who had the money, time, and land to practice this science. The hobby’s popularity increased after 1735, when a Swedish naturalist named Carl Linnaeus created a standardized system for categorizing plants. This identification method spread across the world, and intellectuals began using their own gardens as sites for labelling and observing nature.2 By purchasing and planting seeds from all over the world, these landowners used these gardens to show off their wealth. These exotic gardens became botanical gardens or they grew in greenhouses. Many of the botanical gardens in the present day, like Bartram’s Garden in Philadelphia and the New York Botanical Garden, were first created for this purpose.

By the start of the 1800s, the seed trade was in full bloom. Places like Philadelphia, Boston, Charleston, and other port-towns imported many seeds from all over the world. James Madison was one of these men who benefitted from this colonial market, which we see in his meteorological records from 1784-1803. He is one example of a landowner and an intellectual who actively participated in the seed trade. 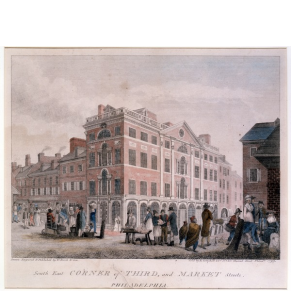 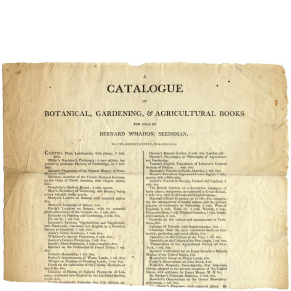 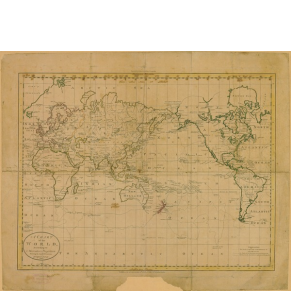 Chart of the world, according to Mercator's projection, shewing the latest discoveries of Capt. Cook. 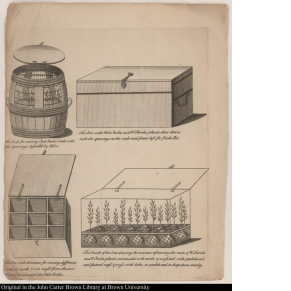 Diagrams on how to pack seeds

Print depicting a corner of Market Street in Philadelphia, where many traders and companies were located by the turn of the nineteenth century. Image can be seen here in our Digital Library. 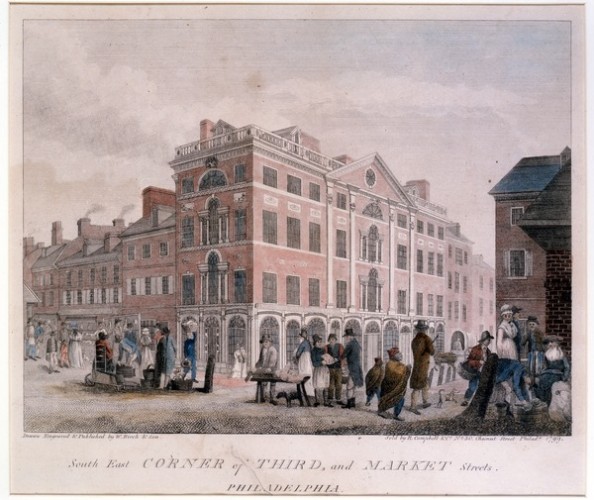 A list of books pertaining to agriculture sold by one of the famous seedmen of Philadelphia in the eighteenth century, Bernard McMahon. The document can be found here in our Digital Library. 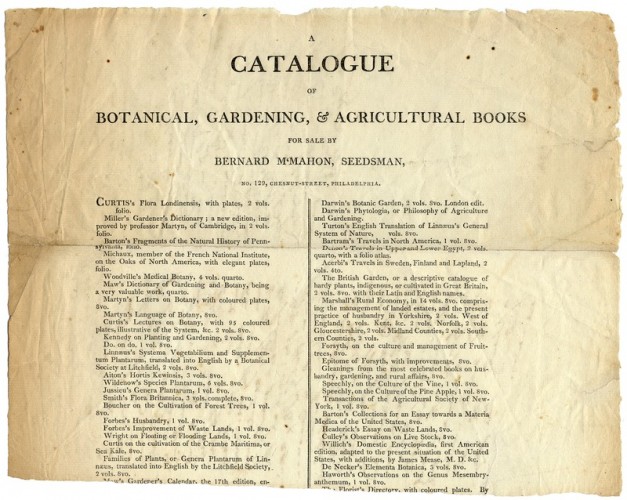 A catalogue of botanical, gardening, & agricultural books for sale by Bernard M'Mahon, seedsman, no. 129, Chesnut-Street, Philadelphia

Chart of the world, according to Mercator's projection, shewing the latest discoveries of Capt. Cook.

World map created after Captain Cook’s voyages showing the extent British ships had modernized and traveled by 1770. The map can be viewed here in our Digital Library. 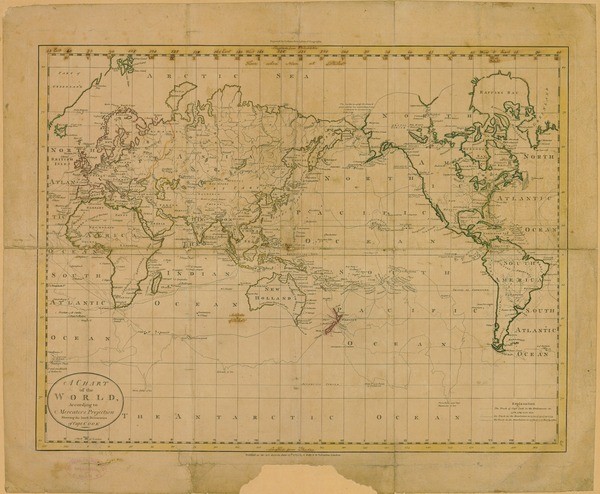 Diagrams on how to pack seeds

A visualization of seed- and plant-packing methods for voyages across the Atlantic Ocean. Courtesy of the John Carter Brown Library Digital Collections. 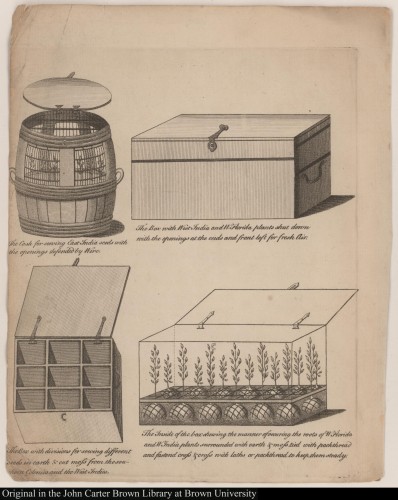 The Many Places Represented in Madison’s Garden

From 1784 to 1803, Madison recorded the daily temperature, wind direction, and weather at sunrise, 2pm, and 4pm. This was part of a larger science project that Thomas Jefferson created to collect more climate data in the United States.3 Madison also used these records as a space to note the state of his garden. From these notes, we can see that Madison was an active participant in the eighteenth-century seed trade.

Where did these seeds come from? The map below demonstrates the expansive origins of some of these plants at Montpelier. In 1791, Madison planted rice that came from Guinea and from Timor, places nearly half a globe away. The most popular location of origin Madison notes in his volume is Philadelphia, where nearly half of these recorded instances of plants came from. By the 1790s, Philadelphia was a booming trade town, and there were many traders of seeds and plants, or “seedmen,” in downtown Philadelphia. One such seedman, David Landreth, sold seeds to famous plantation owners like George Washington and Thomas Jefferson. We can guess that when Madison was in Philadelphia, he might have bought these seeds from the same trader.

The seed trade was not just bound to the purchasing of seeds from trader to landowner. Gifting was another way seeds were traded. Madison noted twice in the volumes that he was planting beans given to him from George Washington. On April 4, 1789, he wrote, “...planted white beans from Mount Vernon” and then on April 10, 1790 he noted, “...planted large beans from George Washington.” The trading of plants from one friend to another was another way seeds spread into new environments across North America. For Madison, it was his friendship with Washington that caused the movement of beans from Mount Vernon to Montpelier.

Marking the origins of the plants Madison included in his garden shows that he was an active participant in the seed trade. His garden at Monticello is tied to at least seven other locations across the globe that he noted in his weather journals. These seven locations and nearly twenty types of plants imported from elsewhere show that gardens in early America had many more stories to them than meets the eye. Knowing where and how plants got to America is a tale as complex and diverse as the history of the seed trade itself. 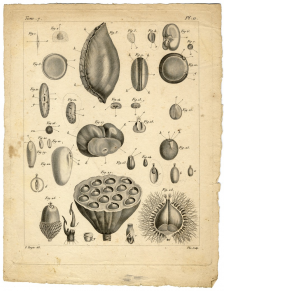 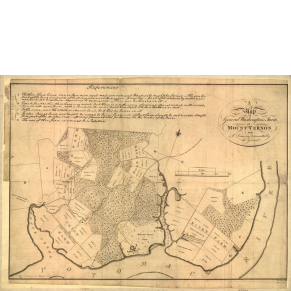 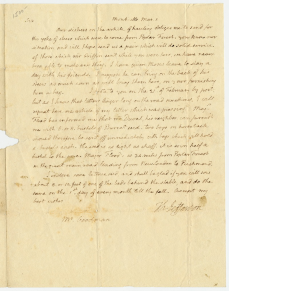 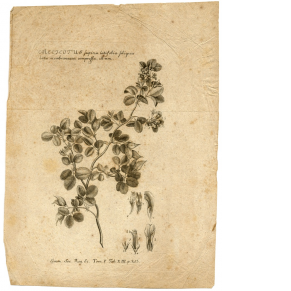 Sketching seeds and plants was one way intellectuals shared their naturalism across the Atlantic. This sketch can be viewed here in our Digital Library. 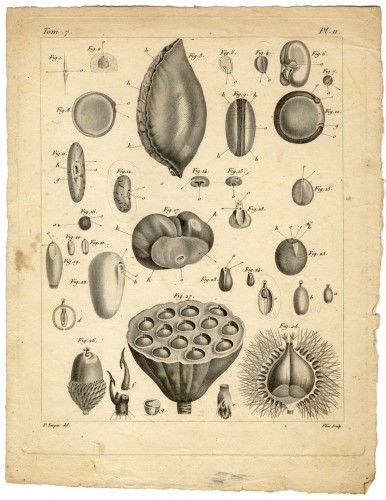 Mount Vernon is one example of a plantation where non-native seeds were imported, planted, and studied in Washington’s greenhouse and botanical garden. Courtesy of the Library of Congress, Geography and Map Division. 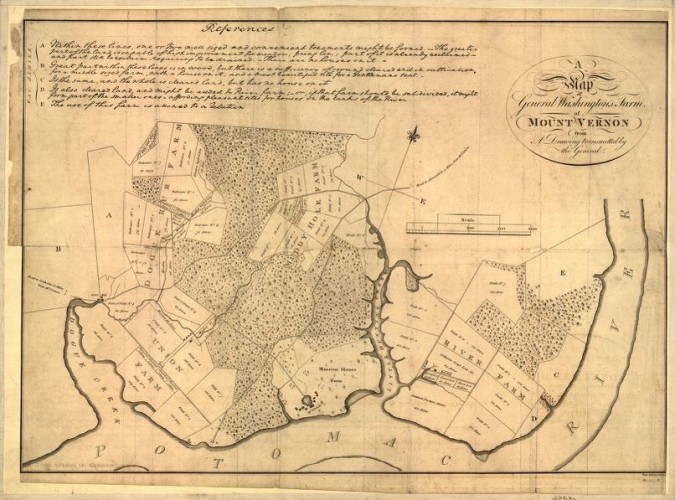 Thomas Jefferson had Madison record the weather at Montpelier for years and was also an avid seed importer for his plantation, Monticello. This letter can be found here in our Digital Library. 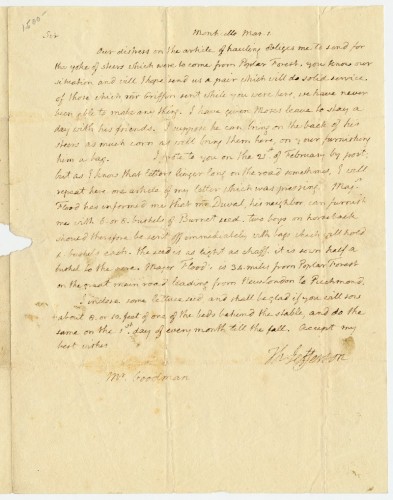 One of the most imported plants to Montpelier based on his meteorological records was peas, which was commonly grown in early Atlantic colonial gardens. This sketch of a pea plant can be found here in our Digital Library. 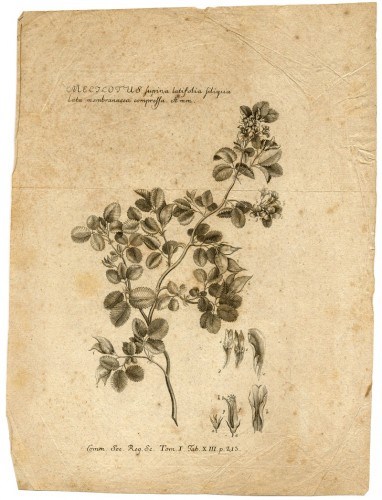 Realities of This History

While the seed trade helped sustain communities and increase scientific observations of the natural world, the creation of gardens and fields composed of global fruits and vegetables also represented power for the colonists. These spaces were used as a tool to “tame” the perceived wilderness that made up North America.4 By claiming land and turning it into fields for crop production, colonists exerted their power over that space, no matter who owned it before they settled there. Settlers’ importation of seeds furthered colonization by replacing native plants in North America with new, and possibly more invasive, plants.

Enslaved peoples also played important roles in the importation of seeds to North America. When hundreds of thousands of Africans were forced across the ocean to work on plantations, they sometimes brought along seeds so they could bring a part of their culture with them. The enslaved also repurposed plants that were imported by Europeans for their own use. Two of these plants, cotton root and the peacock flower, were used by enslaved women to prevent unwanted pregnancies.5 Additionally, many of the laborers who planted and harvested the settlers’ imported plants were enslaved. At Montpelier, Madison's family enslaved over three hundred people.6 We can see a glimpse of this history when Madison wrote about the planting and harvesting of larger crops like tobacco, rice, and rye. While Madison never performed this labor, noting the days when crops were harvested indirectly refers to the work done by the people he enslaved. It also exemplifies the silencing of enslaved actions in colonial documentation. The enslaved were never mentioned in the weather journals, but their work was taken into account by Madison.

The early colonial transatlantic seed trade started when the first colonists set foot on North American land. It grew and prospered over the course of the seventeenth and eighteenth centuries. Landowners, like James Madison, used the seed trade as a livelihood and for scientific study. Yet the seed trade also served other purposes: it was a tool of colonialist expansion as well as a lifeline for enslaved peoples to hold onto their own culture and botanical practices. The results of the early American seed trade can be seen today with the existence of botanical gardens, historic greenhouses, and European plants that have gradually naturalized into the North American environment. 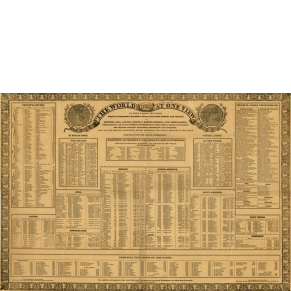 World at one view 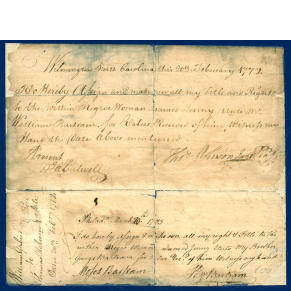 Bill of sale for an enslaved woman. 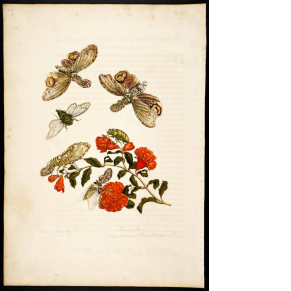 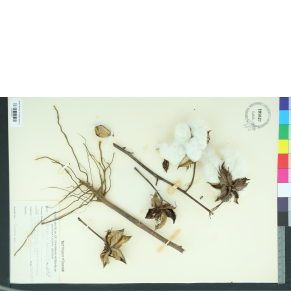 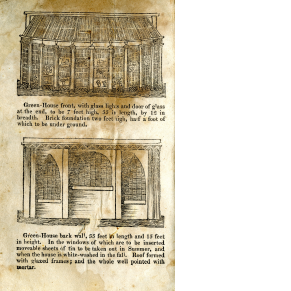 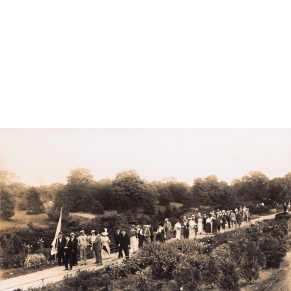 World at one view

The British Empire had a thriving global trade system in place in the 1700s, including the seed trade, which can be seen here with this list of nations and communities found all over the world. This document can be found here in our Digital Library. 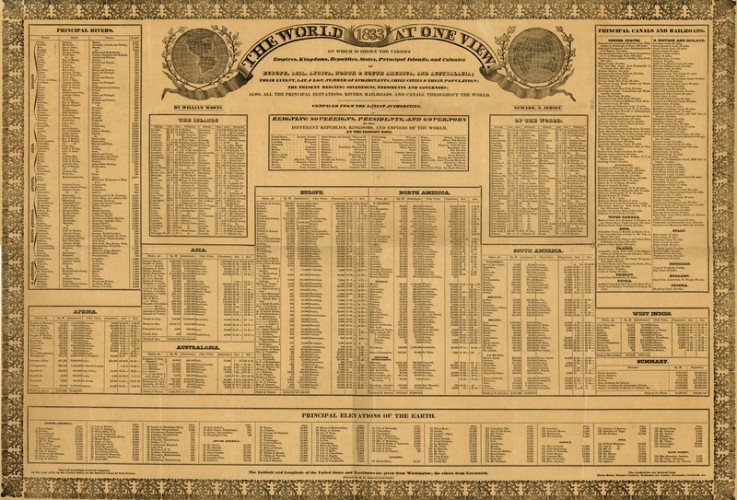 Bill of sale for an enslaved woman.

Enslaved peoples made up the labor force on plantations and in early colonial gardens, like that of William Bartram, whose bill of sale for an enslaved woman is seen here. This document can be found here in our Digital Library. 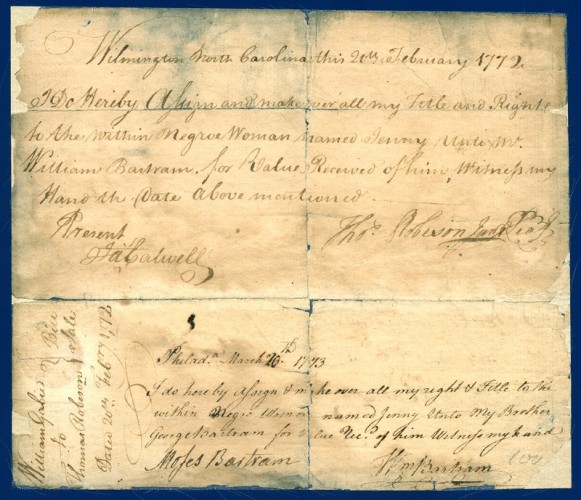 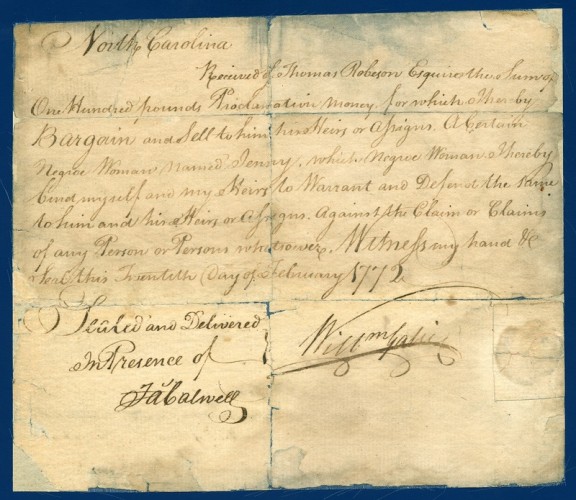 The peacock flower was used and shared by enslaved women across the Atlantic world for medicine and as an abortifacient for unwanted pregnancies. Courtesy of the Linda Hall Library of Science, Engineering & Technology. 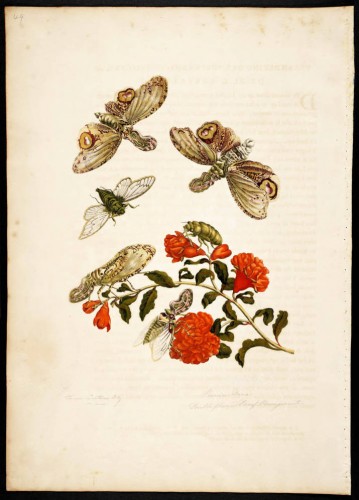 Cotton Root was brought over from Africa during the seed trade and was often repurposed as medicine and an abortifacient by enslaved communities on plantations. Courtesy of the Georgia State University Digital Commons, Herbarium Collection. This work is licensed under the Creative Commons Attribution-Non-Commercial License 4.0. 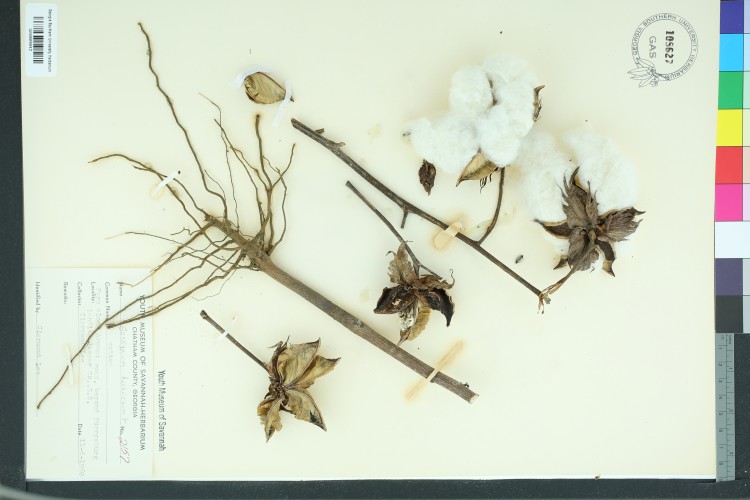 Greenhouses were used by the colonial elite to house the exotic plants they imported and studied from around the world. Courtesy of Special Collections, College of Charleston Libraries. 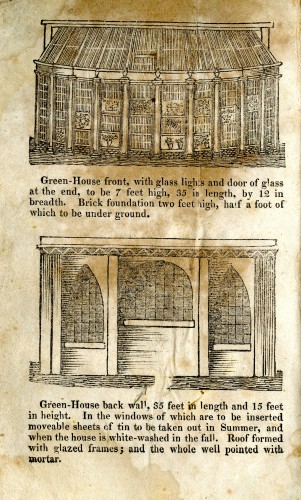 Botanical gardens were another way that imported plants were displayed and shown off by upper-class landowners and were still used for the same purposes by the turn of the twentieth century, pictured here. See this photograph here in our Digital Library. 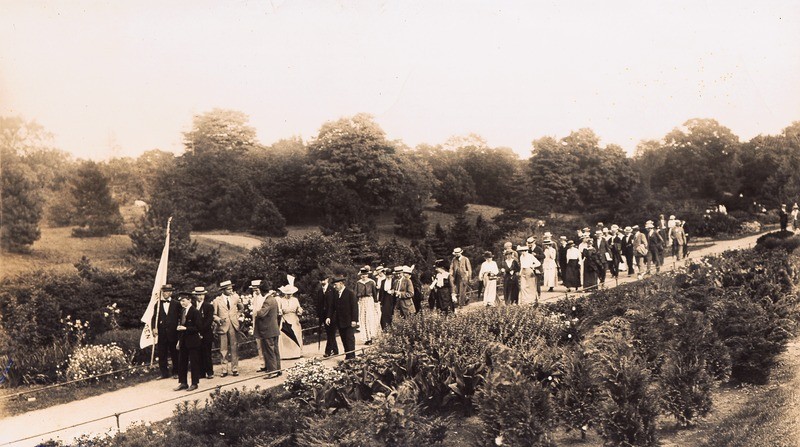