When is a Mastodon Not? 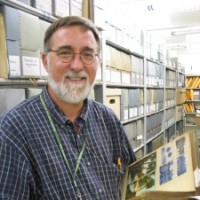 Earle Spamer's career of more than 40 years has involved the care and management of archives and natural history collections... END_OF_DOCUMENT_TOKEN_TO_BE_REPLACED 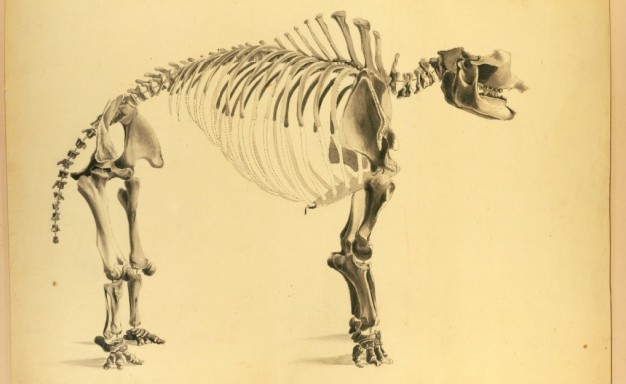 The American Philosophical Society holds many illustrations made by the celebrated 18th and 19th-century artists Charles Willson Peale and his sons. Peale, noted for his Philadelphia museum of natural history objects, portraits, and paintings, also in 1801 had excavated a skeleton of the extinct American mastodon in New York State, which he proudly displayed and widely advertised.

C. W.’s son Titian Ramsay Peale was the true naturalist of the family, devoting the better part of his life to world exploration, collecting specimens, and painting. So it comes as no surprise that he would make drawings of the mastodon. One of them, “The Gigantic Mastodon” shown above, was drawn when he was a young man, in January 1821.

Yet there is an unseen danger in our familiarity with the Peales' work, rather than in the identification of animals.

Years ago, pen-and-ink drawings of a full skeleton and limb bones were cataloged as showing a mastodon. It was C. W.'s son, Rembrandt, who around 1801 had carefully labeled the major bones and provided a very clear depiction of these various elements of the skeleton.

For years after this drawing was cataloged in the 20th century, it was made available to authors and was accordingly reproduced in publication—illustrating a mastodon, of course, and mistakenly attributed to Titian (who in 1801 would have been only two years old).

A year or so ago, a researcher in Germany contacted the APS Library to let us know that this illustration seemed to be similar, if not identical, to an illustration in a 1734 publication from France that showed an elephant skeleton. And indeed, it does.

The illustrations in question were published in Volume 3, Part 3 of the Mémoires de l’Académie royale des sciences, in Paris. Part 3 is its own volume with the title, Mémoires pour servir à l’histoire naturelle des animaux, dressés par M. Perrault (Memoirs to serve the natural history of animals, prepared by Monsieur [Claude] Perrault). Pages 101-156 and several plates of illustrations are dedicated to a thorough anatomical description of the elephant. Two plates show bones; one a complete skeleton and the other various details.

Not only do the Rembrandt Peale “mastodon” illustrations in question faithfully reproduce the elephant illustrations made by Perrault a century earlier, but careful examination shows that his drawings of the limb bones were almost certainly traced from the book plate. His drawing of the full skeleton is less precise, but it seems clear that the limb bones were important. These comparisons show that Rembrandt was studying the configuration of the skeletons of the two creatures and the relationship between corresponding bones, presumably as a means to assist in reassembling mastodon remains dug from the ground in New York.

The story might simply end here. But the copy of the Paris academy’s Mémoires that we looked at to corroborate the German scholar’s notification to us was originally in the personal library of John Vaughan, Librarian of the APS from 1803 to 1841, and a widely read scholar. For some reason, much of the section on the elephant is marked with pencil; someone had been “highlighting” pertinent parts. No other part of this volume is marked up.

It’s conjectural, but might have these pencil marks been made by Rembrandt Peale? After all, the Philadelphia community of scholars was both tight and close by. Vaughan may have lent his copy to Peale.

This is a pleasing circuit of events. The best efforts of the APS’s early catalogers (who were not naturalists) saw only a mastodon in these drawings—and the Peales were the American mastodon go-to people of the day. But an elephant it is. We’re grateful to the kind intercession of an interested researcher overseas, who not only took time to suggest there was an error but unwittingly may also have identified for us a copy of an 18th-century volume that may now have an association with Rembrandt Peale.