What Is This Curious Object?

March 28, 2022
Share
Processing archivist, page in the reading room. Prior to relocating to Philadelphia from the Boston area, was the curator of... END_OF_DOCUMENT_TOKEN_TO_BE_REPLACED 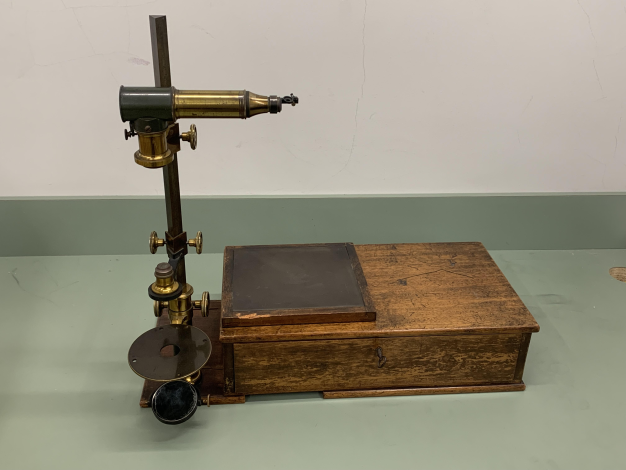 One day this past winter, I opened a large cardboard box containing elegant scientific instruments: objectives, or magnifiers, which were contained in their own smaller box, glass photographic slides of embryos*, and a compound microscope. Inside the box of objectives, a tiny piece of paper with the name “W. His” written on it was tucked into the corner. The photographic slides line up in a small box that says, “Original Photographien zu His,, Anat. Mehscho. Embr., Leipzig 1880,” embossed in gold. The compound microscope has “Dr. E. Hartnack, Potsdam” engraved on its optical tube.

Of these objects, the two pieces that puzzled me the most appeared to belong together, based on the shafts of each. They fit together easily, but once assembled, created a curious looking thing, both unlike a microscope, and yet, similar. I also found a bullseye bench condenser, various eye pieces, and a mahogany case that the curious object is somehow meant to be used with and stored in. There is a two-sided glass plate designed to fit on top of the case. This plate has writing on it that needs to be back lit in order to read. Turning the case over, I noticed “W.His, Leipzig, 1880” lightly carved on the underside.

I knew from the mailing address on the box that the instruments came from the Carnegie Institution of Washington. Articles written between 1882 and 2020, as well as my email correspondence with Dr. Nick Hopwood of the University of Cambridge, led me to understand that the contents of the box had originally been at the bench of Wilhelm His in Leipzig, Germany. Born in Switzerland, Wilhelm His (1831-1904) was a developmental anatomist and technical innovator who could imagine the unseen in three-dimensional structures. He invented and built tools that introduced new methods for the study of human embryonic development. He was the first to conceptualize studying the human embryo as a whole, and his methods included dissection, serial sectioning, graphic reconstruction, and the meticulous conversion of magnified drawings into three dimensional models. He wanted to reconstruct the serial sections into models in order to compare stage with stage and establish norms of embryonic development. He very much wanted to steer anatomists away from haphazard methods of presuming embryonic chronological age.

His’s image, shown below, is considered the first accurate and exhaustive study of the development of the human embryo.

The curious instrument was an embryograph (see header image), a drawing apparatus His invented to allow him to see what was too small for the naked eye. With both a microscope and embryograph, His could more accurately draw an enlarged picture of an embryo, thereby projecting sections in their proper positions to the same scale. The first step was to assess the embryo’s developmental stage, photograph it under the microscope, and create a record of its full form prior to serial sectioning.

This particular embryograph was a modified version of His’s original design. It was made by Dr. E. Hartnack in collaboration with Professor His’ specifications in 1880. Providing necessary low magnification, the apparatus includes an Oberhauser-type camera lucida that is a prism in a rectangular tube, in front of which is the eyepiece, carrying a small glass prism. The camera lucida, combined with a small photographic objective, slides on a bar divided into half millimeters, and the glass plate is placed to the side of the apparatus to provide a drawing surface. His’s methods included comparative descriptions of specimens and introduced the study of comparative anatomy at the cellular level.

His imagined an institution devoted to the study of embryology, and a student of his from 1884-1885, Franklin P. Mall of Ohio, brought that dream to fruition 30 years later in Baltimore, Maryland. With funding from the Carnegie Foundation, Mall was able to open the doors to The Carnegie Institution of Washington specifically for the study of embryology. Under His’s mentorship, Mall studied embryonic anatomy by observing the form of living organisms and comparing different human embryos to one another. At the Carnegie Institution, Mall collected specimens for study that started what became known over time as the 23 Carnegie Stages, representing a series of events that must be completed during the normal eight week development of the embryo. The specimens remain the framework for the study of human embryos that today can be seen virtually through the Virtual Human Embryo illustrated atlas consisting of 14,250 pages that took a team of computer imagers 12 years to assemble: http://virtualhumanembryo.lsuhsc.edu/.

By bringing a certain order to the study of human embryos, and by inventing the embryograph, His opened a new field of scientific inquiry that continues to inform with each generation of modern technology. The first three directors of the department of embryology at the Carnegie Institution of Washington were members of APS: Franklin Mall, (APS 1906) George Streeter (APS 1943) and George Corner (APS 1940). Maxine Singer, (APS 1960) is President Emeritus of the Carnegie Institution of Washington.

"Producing Development: The Anatomy of Human Embryos and the Norms of Wilhelm His", Nick Hopwood, Bulletin of the History of Medicine, Vol. 74, No.1, 2000.

The Journal of the Royal Microscopical Society, 1882.