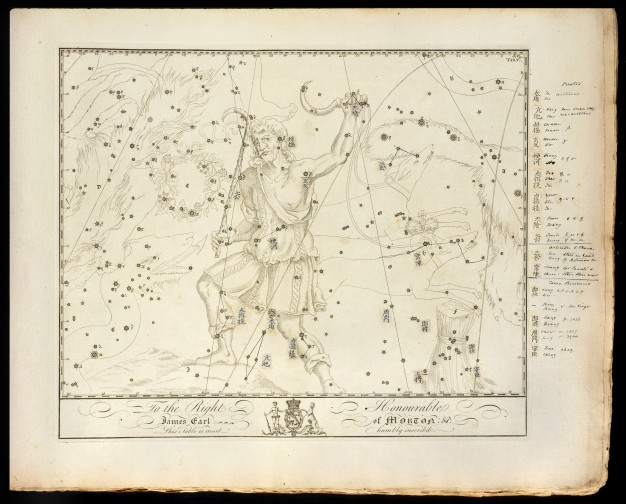 One of the truly rare and intriguing items in the APS Library collections is a star atlas compiled by John Bevis, a physician (1683-1771) who studied medicine at Christ Church, Oxford; he began his medical practice in 1730. Bevis, however, had a consuming interest in astronomy. He discovered the Crab Nebula in 1731, and by 1737 he was contributing papers on eclipses and comets to the Philosophical Transactions of the Royal Society. He was a successful physician, but it did not satisfy him, and he moved to Stoke Newington, where he built and equipped an astronomical observatory. He was tireless, often taking 160 star-transits (the passage of a star across a telescope eyepiece) in a single night. He took part in the observations of Halley’s Comet in 1759, and the transits of Venus in 1761 and 1769. Bevis died a dedicated astronomer; in November 1771 he fell from his telescope while taking the sun’s meridian altitude.

His most ambitious astronomical project was a star atlas. He took observations of the many star transits he had accumulated over the years, added them to those already catalogued by John Flamsteed and Edmond Halley, and used them to compile what he intended to be the finest star atlas yet published, the Uranographia Britannica. He and John Neale, a London instrument-maker who would publish the atlas, collaborated to produce beautiful and detailed engraved plates which showed the constellations from previous atlases and added new objects, among them the Crab Nebula and two supernovae. Bevis would be far better known as an astronomer today had his atlas been published, but his publisher went bankrupt.

No copy of this work would survive today had not several sets of impressions been taken from the plates before the bankrupt publisher’s equipment was seized. The American Philosophical Society Library’s Uranographia is a “most atypical surviving copy” according to history of astronomy scholar William B. Ashworth, who has studied surviving copies. It is the most complete copy yet found; in addition to fifty-two engraved plates (with explanations for thirty-two of them), it has a fourteen page star catalogue at the end. Also, several of the plates have names of stars in Chinese characters in the right-hand margins. In this chart of the constellation Orion, we see that the characters were cut from another source and pasted in the margins, with the Chinese name and a translation into English beside them.