May 16, 2022
Share
Marian L. Christ is Associate Librarian and Head of Cataloging. She received her MLS from Drexel University and BA from... END_OF_DOCUMENT_TOKEN_TO_BE_REPLACED 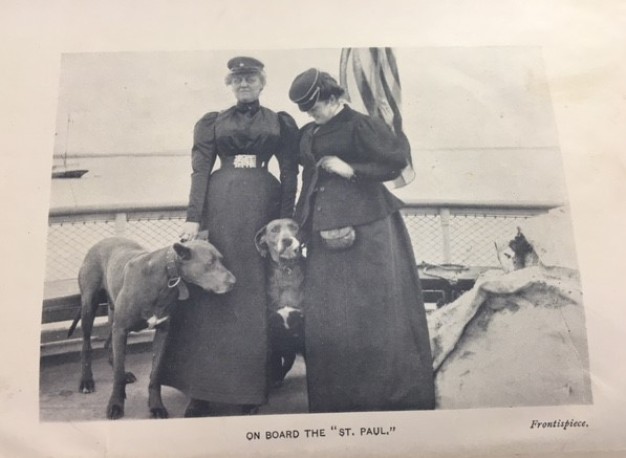 In 2013, Ellen Lehman, a generous donor to the Library who has given us many works on the Arctic and its peoples, gave us Two Women in the Klondike: the Story of a Journey to the Gold-Fields of Alaska. This first edition volume, published in 1899, was written by Mary E. Hitchcock, a reporter, widow of a naval officer, and one of the two women referenced in the book’s title. She and her friend Edith Van Buren, former president Martin Van Buren’s great-niece, caught the “gold fever” of the time, and decided to explore Alaska’s gold fields. They had already toured China and Egypt, and had the enthusiasm, financial resources, and stamina to support their expedition to the Klondike. Many friends and acquaintances, though aware of the ladies’ previous tours, were skeptical of their determination to travel to what one of their contemporaries described as the “skirmish line of civilization.” But on June 12, 1898, they departed from San Francisco on the steamer St. Paul to sail up the Yukon River to Dawson City in Canada.

They traveled in style as tourists. Their two Great Danes, Ivan and Queen, accompanied them on the journey, along with two canaries, a parrot, two dozen pigeons, fine linen, china, air mattresses and books. More comforts of home included a gramophone and records, musical instruments, a portable bowling alley, and a motion picture device, or animatoscope, with accompanying films. They purchased a full-size circus tent to house both their furnishings and menagerie. Mrs. Hitchcock remarked on paying “about one hundred dollars in duties” at the Dawson Custom House, since their belongings weighed over a thousand pounds and the circus tent alone weighed four hundred pounds. The tent, however, ultimately proved to be a disappointment; the women had no trouble finding enthusiastic volunteers to erect it, but the poles they used were too short, causing areas of the tent to buckle under the weight of heavy rains and snow. Another setback came when Edith Van Buren, afraid that Queen would not survive an extended stay among the wild animals of Alaska, sent the dog back to San Francisco before they arrived at Dawson City, leaving only Ivan to experience the entire adventure.

This adventure compelled Hitchcock and Van Buren to purchase their official certificates to become free miners, camp in the mining fields, and, finally, abandon the tent (which had attracted so much attention) to build the largest house in west Dawson, or Dawson Annex. Mary Hitchcock described all of this in diary form, and her detailed descriptions of the manners, food, and personalities of rural Alaskans and Dawson City residents created a sensation when the resulting book was published in 1899. Armchair travelers and general readers alike wanted to learn about the two socialites who became citizens of Dawson City and survived the dangers of Alaska’s mining fields. The women were happy to return to California, but their memories of Alaska were positive. “Our trip had come to an end, and although the privations had been many, they had been more than compensated for by the kind friends we had made, the insight we had gained into a phase of life hitherto unknown to us, by the magnificence of the scenery, and by the novelty of the experience.”

Hitchcock, Mary E. Two Women in the Klondike: the Story of a Journey to the Gold-Fields of Alaska, by Mary E. Hitchcock.  New York: G.P. Putnam’s Sons, 1899.