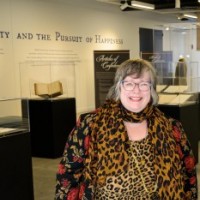 Sue Kozel teaches in the History Department at Kean University and as an Assistant Adjunct Professor at Mercer County Community... END_OF_DOCUMENT_TOKEN_TO_BE_REPLACED

When I visited the American Philosophical Society (APS) Library in mid-August 2019, I was on a mining expedition for documents that would help me determine whether the APS had taken a position on slavery in the British colonies or the new United States during the time of Thomas Jefferson’s Membership. In August 2020, I’ll be at the International Center for Jefferson Studies researching Jefferson’s employment of Quakers to work for him on his slave plantations or while he lived in Philadelphia.

So, imagine my surprise, when the Thomas Jefferson Papers yielded a surprise not noted in the APS bibliographic record.

I always turn pages. On the back of a letter from Virginia Royal Governor Lord Dunmore to Captain White Eyes, an ally of the British Governor and local “Indian Chief”, is a large piece of text with a big X through it. The piece describes the views of a patriot lamenting Lord Dunmore’s 1775 proclamation encouraging slaves to run from the Americans to join the British army and receive freedom. There are strange markings, a number 10, a phrase (“might be supprefsed”), and then extraordinary text.

The text is for a “counter proclamation” by Mr. John Pages. Talking about how Dunmore urged “slaves to rebel against their masters contrary to all laws both human and divine,”  Mr. Pages urges that slaves no longer start “flying” from their owners to “the said Lord Dunmore for protection, and to caution all slaves against falling into so dangerous an error.” Mr. Pages further explains that Dunmore  “bloodily encouraged our slaves to revolt from their masters.”

Mr. Pages may be John Page of Virginia, a future Virginia governor of the American Patriots who wrote to George Washington and others on Revolutionary War strategies.  Furthermore, one possible ancestor of John Page was a member of the Royal Africa Company that engaged in slave sales in the late 1600s, along with Nathaniel Bacon and others in Virginia.

Regardless of his identity, Mr. Pages or Mr. Page was moved to outrage, as expressed by this detailed one page account to attack Lord Dunmore, and this big crossed out page shows the emotion of the writer and the force of Mr. Page/Pages comments.

On Page Three of another “surprise” in the Thomas Jefferson Papers, Lord Dunmore wrote General Howe on November 30, 1775 to share good news including the running away of upwards of 300 persons to join the British Army in response to Dunmore’s proclamation.  “You may observe by my proclamation that I offer freedom The – of all the rebels who join me, in consequence of which there are between 2 and 300 already come in.” We know that Lord Dunmore’s proclamation urged indentured servants along with black slaves to run to the British, and while we cannot know for sure whether Lord Dunmore is discussing enslaved people who ran away, we do know from Dunmore’s delight in the letter that he believes his proclamation is working.

Hopefully,  I will get back soon to APS in the Spring and find more “surprises” that will inspire the undergraduates I teach. The wonderful experience from researching is that if you are open to look completely at documents, one never knows what will be found.  My summer experience at APS reminds me again why I enjoy research. Thanks to the wonderful Library staff for all their assistance in supporting my research quest.