August 11, 2020
Share
Ms. Joyet is the Assistant Head of Cataloguing. After graduating from Drexel University's iSchool in 2009, Ms. Joyet was hired... END_OF_DOCUMENT_TOKEN_TO_BE_REPLACED 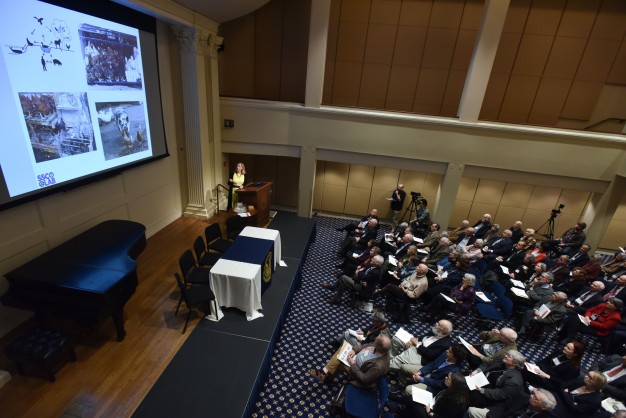 Since November 2003, the American Philosophical Society has recorded and preserved almost all of the lectures given at the biannual Meetings in November and April. The notable exception is the San Francisco Meeting of November 2006. While each Meeting is unique, there are several recurring events: new Members are inducted, prizes are awarded, and symposia are conducted. When, in response to the coronavirus pandemic in March, APS staff undertook remote work to ensure safe social distancing, we wanted to make sure the work of promoting useful knowledge would continue despite our distance from the APS campus. As Assistant Head of Cataloguing, without access to the physical volumes I spend much of my time with, I turned to the work of cataloguing our backlog of APS Meeting videos. In the coming year, the APS will create a new platform for these Meeting videos. Users will be able to search the database of videos by speaker, subject (topical, name, geographical subject area), collection area (History of Science, Ethnography & Linguistics, and Early American History). In addition, users will be able to search by award and prizes.

Arguably, the highlight of each Member Meeting is the topical symposium. The topics of the symposia range from the "Future of the News" (November 2007) to "Current Research in the Social and Behavioral Sciences" (November 2010). Leading scholars from all over the world congregate in Franklin Hall to discuss this wide range of topics in a true interdisciplinary setting.

In a prescient programming move, the APS hosted a symposium on the 1918 flu epidemic in November of 2019. Thomas Shenk led the discussion titled “The Next Influenza Pandemic.” Joining him were John M. Barry discussing how faulty public policy and poverty made for a particularly destructive pandemic, Jeffery K. Taubenberger discussing the difficulty in creating a viable flu vaccine, Stacey Schultz-Cherry discussing attempts at flu vaccines, and Peter Palese discussing vaccine skepticism from the smallpox to the 1918 pandemic. What follows are a few more of my favorites that I rediscovered when I took on this cataloguing project:

In November of 2008, David Tatel moderated a symposium titled "The Supreme Court and Useful Knowledge." He was joined in conversation by Linda Greenhouse, Ruth Bader Ginsburg, and David Souter. The four discussed voting rights and how judges know what they know.

In November 2015, Linda K. Kerber moderated a symposium on the anniversary of the end of the American Civil War: "The Past Unshackled: When Revolutions Go Backward." Joining her are Thavolia Glymph, discussing how the period of Reconstruction affected Black women in particular, and Thomas C. Holt, discussing if emancipation actually occurred in the 19th century or rather after the passage of the Civil Rights Act in 1964.

One of the perks of being an APS staff member is gaining entry to these APS Meetings. Over the years, certain lectures have become “staff favorites.” One such lecture came from Michael J. Donoghue of Cornell University in April 2019. In the talk, titled "Why are there so many kinds of leaves?" Dr. Donoghue discussed the varieties of leaves on plants throughout the world and what we can infer about their evolution. Donoghue used the example of the maple and some of the varieties from around the world.

In November 2009, Michael Silverstein discussed how “Wine Talk” has evolved in a lecture titled "Seized by Eminent “Domaine:”  The “Vinification” of Comestible Prestige." The late Dr. Silverstein “attended and actively participated in 19 Meetings over the years. He was proudly the recipient of a research award from the Phillips Fund early in his career. He generously served on the Meetings Committee, his Class Committee, and the Phillips Fund Committee. Michael was, of course, known well and highly regarded by staff as well as Members.”