Step Away from the Tape 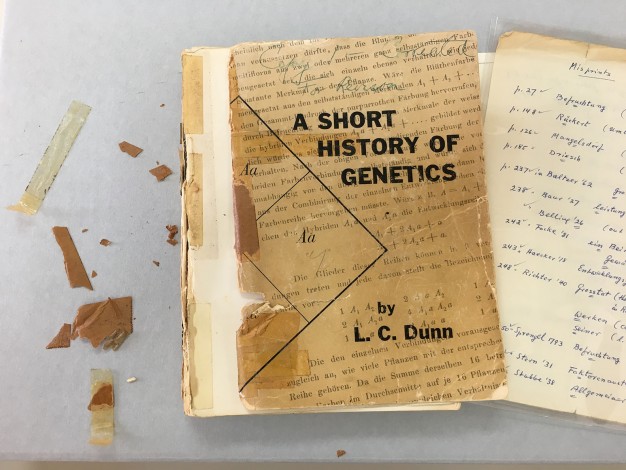 Tapes that stick with the touch of a finger—masking tapes, packing tapes, clear Scotch-type tapes, duct tapes—are one of the conveniences of modern life. Conservators and the tape industry call such tapes “pressure-sensitive” because all they need to stick is gentle pressure. But please, think twice before using them on your books and documents! Even “archival” pressure-sensitive tapes have potential long-term problems.

In the picture above, a former book owner has used layers of packing tape and clear tape to reattach the cover of the paperback. (That book owner may have been L.C. Dunn himself, since this was his annotated copy of A Short History of Genetics, used to prepare a second edition of his seminal text.) As you can see, these tapes turned yellow and rigid over time. Their rubber-based adhesives became crusty, brown, and rigid, and lost all their stickiness. All rubber-based tapes (including masking tape and painters’ tape) will eventually fall off, leaving terrible yellow stains behind.

Tapes with clear acrylic-based adhesives, like Scotch tape, are more chemically stable than rubber-based tapes. But they aren’t risk-free either. The adhesive can slowly creep beyond the tape carrier (the clear or frosted plastic or paper strip that covers it) and stick to other materials or collect dirt. It can also dissolve certain pen inks and other media. And it isn’t completely soluble in any normal solvents, making the tape incredibly difficult to remove.

This was recently borne in on me when I treated the APS Library & Museum’s copy of The Last Voyage of The Resolute, a rare pamphlet penned by Edward Everett Hale that was printed in The Boston Advertiser on June 11, 1856. The purple-prosed pamphlet describes the fortunes of HMS Resolute, a British brig built for Arctic exploration, which was abandoned in the ice in 1854 but recovered by an American whaler and returned to England in 1856. As a sign of their appreciation, the British had a desk built from the timbers of HMS Resolute, and that desk now stands in the Oval Office.

Before coming to the American Philosophical Society, the tattered pamphlet had been mended all over with acrylic tape. To prevent the tape from causing future harm, I had to remove it. Sometimes it is possible to remove acrylic tapes with a thin, hot metal micro-spatula, especially if they have been recently applied, but that proved not to work. The adhesive still lifted the top surface of paper away. So I turned to solvents.

Ethyl acetate is the best solvent for removing acrylic tapes, but it does not dissolve the adhesive; it only swells it. The swollen adhesive is crystal clear, jelly like, and still immensely sticky. Only repeated baths in the solvent and lengthy swabbing with loose cotton swabs eventually removed the sticky mess. This took many, many hours and a tremendous volume of solvent.

The final results of the treatment were good. I replaced all the tape mends with flexible paper mends that can be removed with water if necessary. The pamphlet is now safe for long-term storage and researcher use. But please, spare a future conservator. Step away from the tape.