Statehood, Maps, and What We Learn from Tennessee

Janine Yorimoto Boldt is the 2018-2020 Andrew W. Mellon Foundation Postdoctoral Curatorial Fellow. She is lead curator for the 2020... END_OF_DOCUMENT_TOKEN_TO_BE_REPLACED 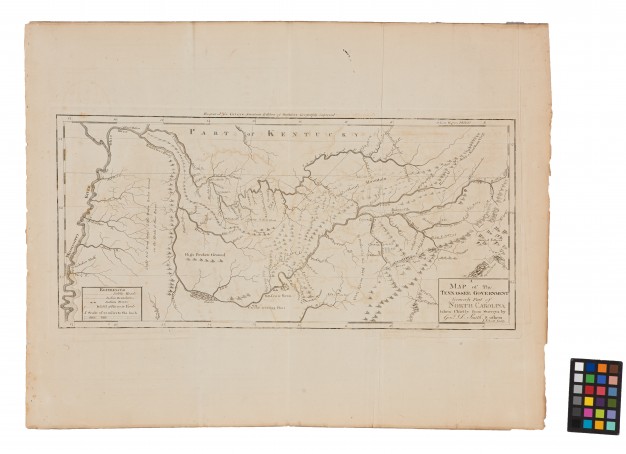 Header image: A Map of the Tennassee Government formerly part of North Carolina taken chiefly from Surveys by Genl. D. Smith & Others, 1793. APS. This is the first published map of Tennessee.

One of the surprises during the planning of Mapping a Nation: Shaping the Early American Republic, was how important the Tennessee maps in the American Philosophical Society’s collection became to the exhibition’s narrative. The maps and objects we found related to Tennessee’s campaign for statehood encompass many of the larger exhibition themes on mapmaking and state-making. On June 1, 1796, Tennessee officially became the sixteenth state. In recognition of Tennessee’s 223rd birthday, here are ten facts about Tennessee and mapmaking that we learned during the development of Mapping a Nation.

1. Philadelphia publisher Mathew Carey published the first known map of “Tennasee” in 1793. The firm of Scot and Alardice were paid for printing the map in November of 1793. 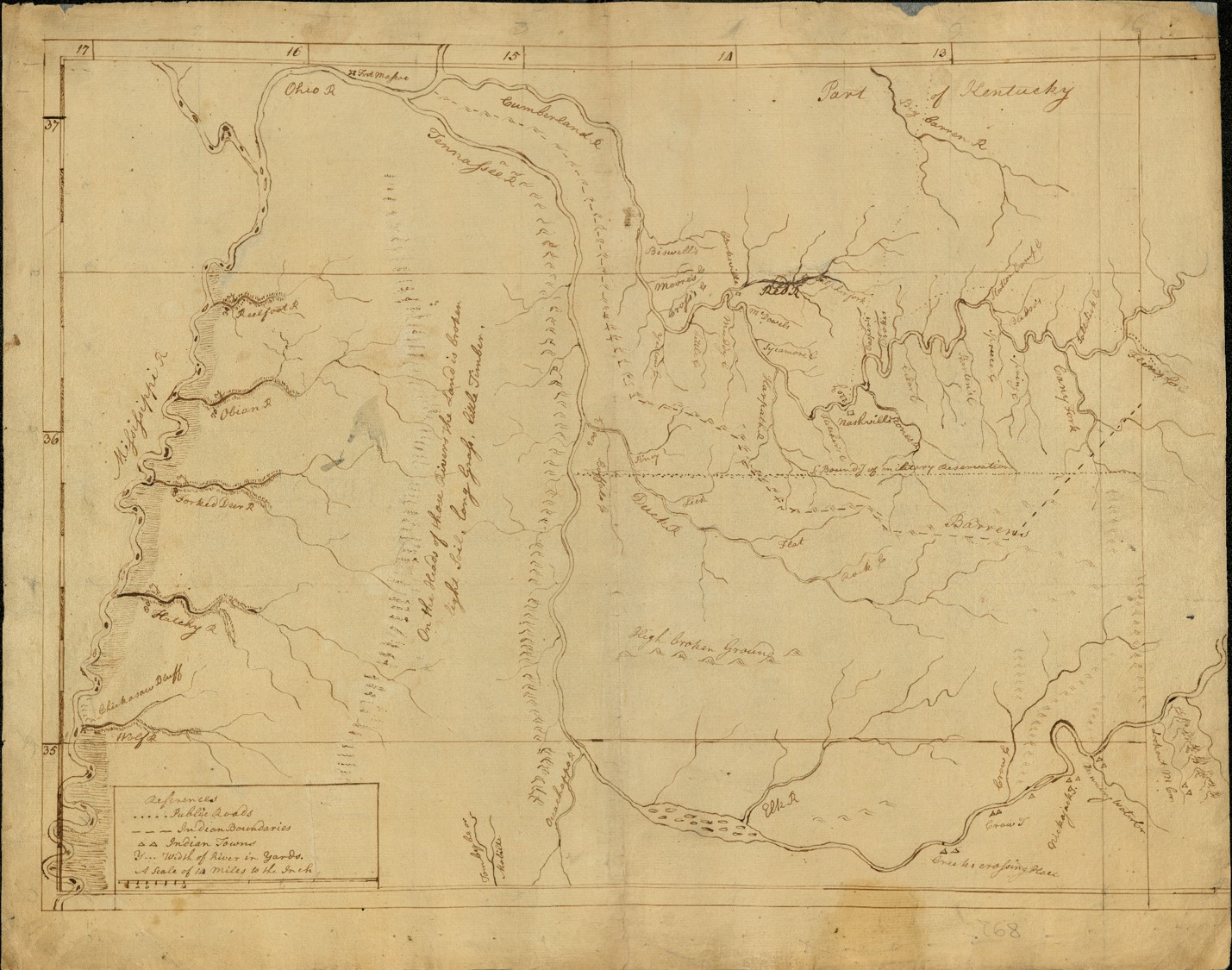 2. Mathew Carey donated two manuscript maps of Tennessee, which were drafts of the published map of Tennessee, to the APS in 1805. The first draft is large and covers two sheets of paper. The second draft was reduced to its final printed size and includes color. Along with the printed map, these provide insight into the process of map publishing.

3. The map was supposed to be printed with a pamphlet titled, A Short Description of the Tennassee Government, attributed to the surveyor and politician, Daniel Smith. However, it was not completed in time to appear with the original printing of the pamphlet. It appeared in later editions of the pamphlet as well as Carey’s atlases. The pamphlet and map were propaganda promoting Tennessee, as part of the territory’s campaign for statehood. They showed U.S. citizens and politicians the natural resources and borders of the territory. The territorial government also conducted an independent census to prove they had enough people to qualify for statehood.

4. The Mathew Carey papers at the Historical Society of Pennsylvania (HSP) and the American Antiquarian Society show that Carey paid draughtsmen to draw maps of the states and territories that appeared in Carey’s American Edition of Guthrie’s Geography and later his American Atlas. However, there is no receipt for drawing or “compiling” a map of Tennessee. There is only a receipt revealing that he paid Samuel Lewis for making “additions” to the map of Tennessee in March 179 This lack of receipt to draw Tennessee indicates that Carey received the manuscript draft of Tennessee as a printing commission. It is likely that the person who wrote the pamphlet also provided Carey with the Tennessee map.

5. Surveyor Daniel Smith (to whom the pamphlet is attributed and who is named on the map), along with other Tennessee politicians including William Blount and William Cocke, were integral to the campaign for Tennessee statehood. Part of the Southwest Territory, the region that became Tennessee was given to the federal government by North Carolina in 1790. Notably, North Carolina only relinquished the territory when the government promised to keep slavery legal – a particular concern of slaveholders after the Northwest Territory outlawed slavery. Tennessee’s path to statehood reminds us that slavery literally defined the shape of the nation.

6. White settlers in Tennessee were in violent conflict with the Cherokee and Creek peoples who lived in the region. Many hoped that statehood would lead to federal military support against these nations. The conflict was a primary reason Tennessee settlers rushed to statehood.

7. A letter titled, “Advice to the Engraver respecting the Map of the Tennassee Govt” appears in the Mathew Carey papers at HSP. It provides detailed instructions for the engraver, Joseph Scott. It also tells the engraver that the “Indian boundaries” were “not to be neglected,” an important reminder that Native nations defined U.S. borders. 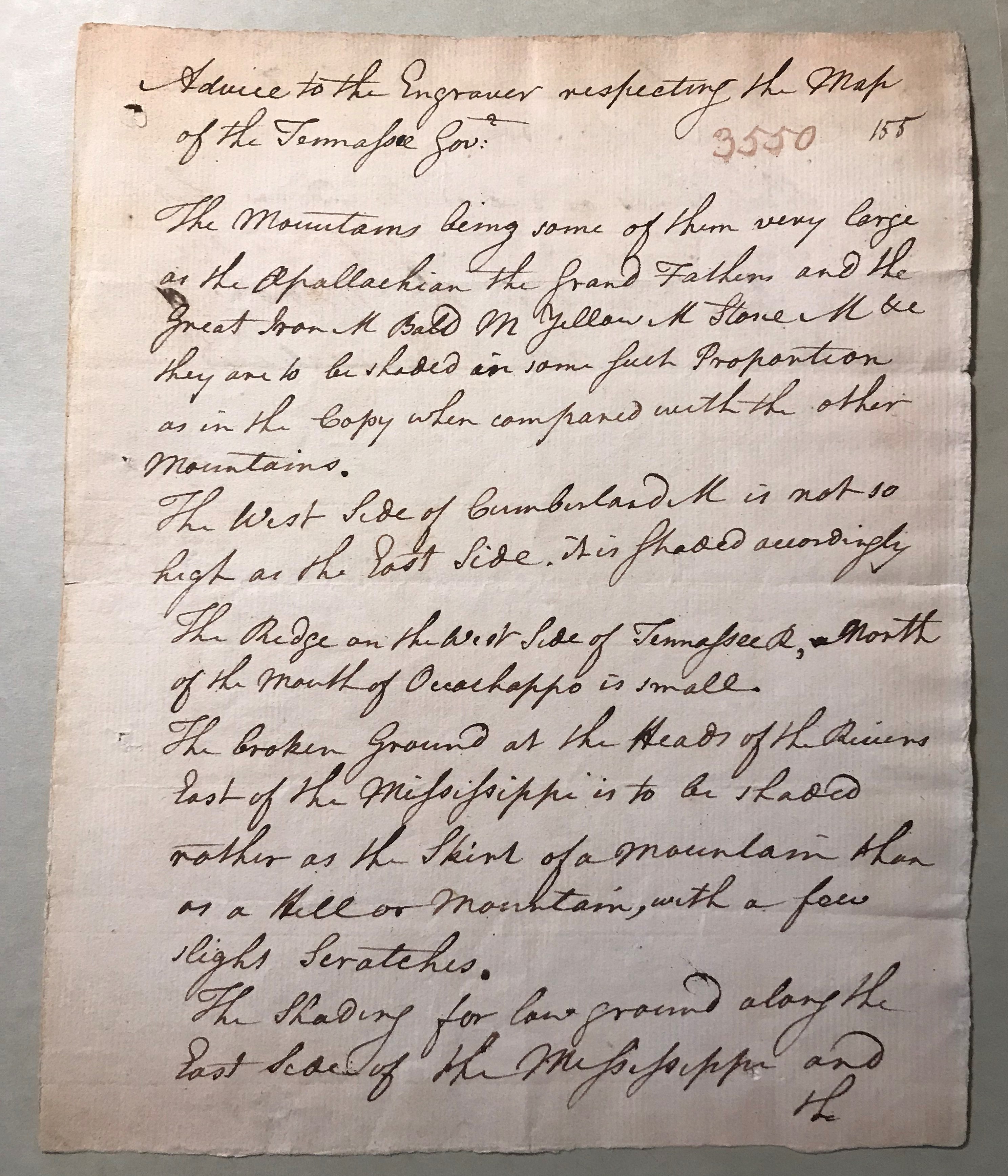 8. In the fall of 1794, the Cherokee towns of Nickajack and Running Water were destroyed by white settlers. These towns appear on the published map, indicating that Carey and his draughtsmen did not correct the maps before they were included in his 1795 American Atlas.

9. Carey also donated a printed map of Tennessee that includes handwritten notations. Some of these changes appear to have been incorporated in later editions of the map, but others were not. It is unclear who made these notations, but it is a reminder that geographies and borders were (and are) continuously revised.

10. Following their census, the Tennessee territorial government held elections for state officials without waiting for Congress to acknowledge them as a state. The first elected senators, William Blount and William Cocke, showed up in Philadelphia (the acting federal capital in 1796) and demanded their place in the Senate. Tennessee statehood was formally approved June 1, 1796.