February 7, 2020
Share
Ms. Joyet is the Assistant Head of Cataloguing. After graduating from Drexel University's iSchool in 2009, Ms. Joyet was hired... END_OF_DOCUMENT_TOKEN_TO_BE_REPLACED 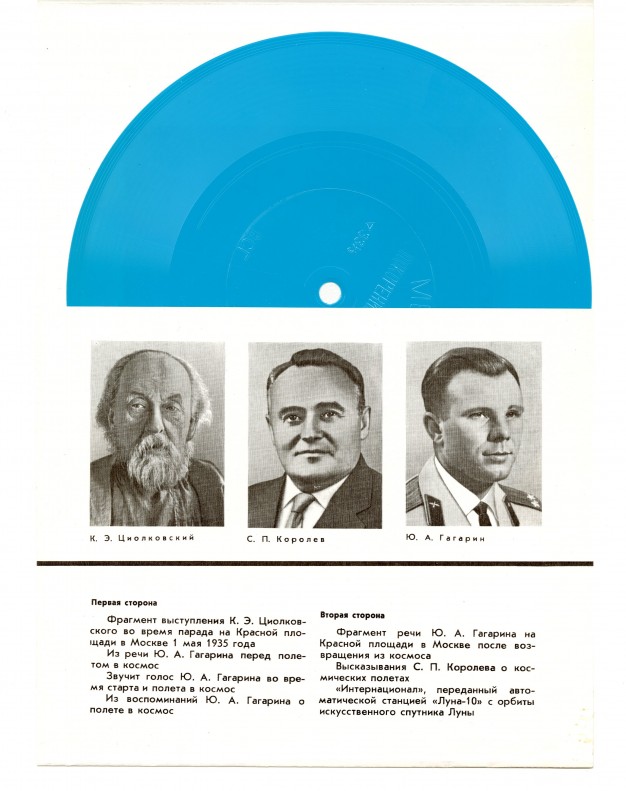 If you were a hip teenager in Soviet Russia in the 1960s, you’d have owned some Bone Music. Because rock music was banned and because the teens still needed to dance, young folks would dig through hospital waste bins looking for discarded X-Rays. They would imprint the latest hits onto these thin plastic sheets. If a teen was caught by the authorities, it was easy enough to say, “That’s my uncle’s knee.”

What do hip Soviet teens have to do with the APS? They learned this technique of pressing sound to thin plastic from their own authoritarian government. Flexi discs were incredibly popular all over the world in the 1950s through to the 1980s. It was easy for music magazines to publish issues with tear-away flexi discs bound into the volume. The Soviet government used this format to disseminate propaganda, light pop music, and children’s songs. The Soviet flexi discs were an iconic bright blue and appeared in many official publications.

The APS holds a copy of Покорение космоса (Conquest of Space), published by the Soviet government in 1972 (610.419 M29p). In itself, this item is unique because it appears that few, if any, U.S. libraries hold a copy. Included at the back of the book is an iconic Soviet blue flexi disc. On it are fragments of documentary recordings of speeches by prominent figures of Russian cosmonautics: Konstantin Eduardovich Tsiolkovsky, founder of cosmonautics; Sergey Pavlovich Korolev, Chief Designer of Rocket and Space Complexes; Yuri Alekseevich Gagarin, pilot of the USSR cosmonaut, first Earth cosmonaut; as well as the melody of the party anthem "Internationale" transmitted by the automatic station "Luna-10" from the orbit of the artificial satellite Luna (documentary recording).

In addition to this treasure from the Cold War, we recently received from long time tour guide Ursula Karau a copy of another flexi disc. This flexi disc was also made for popular consumption: Voices from the moon : the landing on the moon by the astronauts of Apollo 11, July, 1969 (629.47 P54v). Published in 1969 by Philco Ford, this flexi disc features the voices of the three astronauts and of Mission Control.

Unfortunately for Soviet teens and historians, these discs are very fragile and most likely should not be played. In the 70s, we would have played them on any standard vinyl record player, but their lightweight nature and the weight of the stylis means that they are very easily damaged when played. Much like the wax cylinders found in early 20th-century collections at the APS, these items add to the historical material culture. We keep them because they represent how information and propaganda were disseminated during the Cold War and the Space Race.

The Scientific Pursuits of Deborah Franklin

CFP: Relationships, Reciprocity, and Responsibilities: Indigenous Studies in Archives and Beyond

"Uninterrupted Sleighing, and of the Very Best Kind"