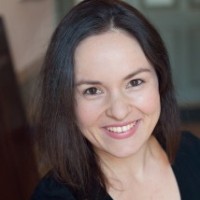 Alexandra is a historian of the Anglo Atlantic World, specializing in material culture from the early modern period to the... END_OF_DOCUMENT_TOKEN_TO_BE_REPLACED 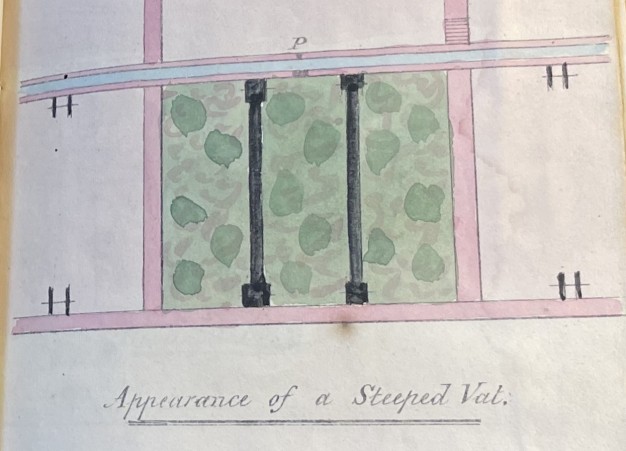 Header image: “Appearance of a Steeped Vat,” Treatise on the Process and Manufacture of Fine Indigo, 1832. British Library.

Most research projects seem to start in earnest when a researcher encounters something that makes them stop, lean back in their chair, stare out the window, and utter “Huh.” Digging through the collection of treatises and dissertations on dyeing, brewing, and farming held at the American Philosophical Society’s Library and Museum, my “huh” moment came in the form of effervescing bubbles, wriggling maggots, and fermenting leaves.

While reading the copy of Thomas Cooper’s 1815 A Practical Treatise on Dyeing and Callicoe Printing held at the APS, I was struck by Cooper’s insistence that “The eye and the ear, must not alone be trusted by the workmen, for the purposes of ascertaining whether the vat is in order; the sense of smelling too will greatly assist…” Describing the steps needed to prepare a woad vat to create blue dye for woolens, Cooper rarely relied on the clock to measure the passage of time. Instead, he instructed his reader to look for “signs” they could measure with their senses. Listening at the edge of the vat to “observe the gentle noise of the fermentation within” helped the artisan judge how far their vat was into the fermentation process; the growth and repeated skimming off of maggots served as a measure of time for bran and madder vats; indigo was ready to be used when blue veins shot through the fermenting dark green mixture.

Cooper was not alone in turning to the senses to measure the passage of time in maker’s spaces.  In 1816, Harrison Hall donated a copy of his 1813 Hall’s Distiller to the APS. Covering a range of brewing and distilling techniques, Hall blended mechanical and sensory ways of measuring time in his “full and particular directions.” The process of vinous fermentation, Hall noted, could be observed by the ear, eye, and nose as the distiller watched and listened for a “gentle intestine motion” in the liquid, followed by the “collection of froth or a head,” that would be accompanied by a “strong, penetrating, agreeable” odor. “Sooner or later,” he noted, “these appearances gradually subside,” and the distiller could move onto the next step in the process.

Sitting in the archive while conjuring visions of maggots floating on an undulating, effervescing, fermenting vat of indigo, I found myself wondering how integral the senses were for understanding the passage of time. My dissertation research, including a month at both the American Philosophical Society and Washington Crossing State Park as the inaugural Swan Foundation Short-Term Resident Research Fellow for Revolutionary-Era Material Culture, attempts to bring together histories of temporality, material culture, and the senses to investigate how time was felt in maker’s spaces in the British Atlantic world during the long 18th century. Cooper and Hall may not have completely ignored mechanical time, but they understood that “an exact Time [was] not altogether a certain Rule” for artisans. The modern tendency to privilege clock time has created an implicitly homogenized understanding of temporality. But before this domination by the clock, lived time was interwoven with the temporalities within bodies, materials, and a vast array of objects that people engaged with in embodied, sensory ways. To gain a better picture of the fullness of time in the British Atlantic, historians need to look to the visual, the auditory, the olfactory, the gustatory, and the tactile ways in which people experienced the passage of time. Looking back from our present moment, a mechanized modernity might appear “natural,” but looking forward from the past, the ubiquity of this sense of time appears less certain.

Cooper, Thomas. A Practical Treatise on Dyeing and Callicoe Printing Exhibiting the process in the French, German, English, and American Practice of Fixing Colours on Woollen, Cotton, Silk, and Linen. Philadelphia, 1815. 667.2 C78p.

Hall, Harrison. Hall’s Distiller…Adapted for the Use of Farmers as well as Distillers. Philadelphia, 1813. 663 H14H.