Seeking Perfection in the Wissahickon Wilderness

May 25, 2021
Share
Processing archivist, page in the reading room. Prior to relocating to Philadelphia from the Boston area, was the curator of... END_OF_DOCUMENT_TOKEN_TO_BE_REPLACED 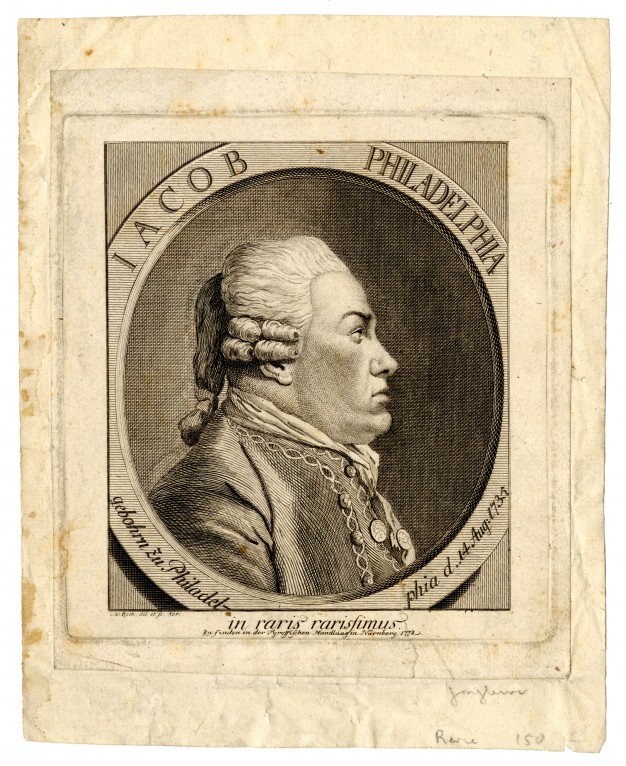 While adding 5,000 engravings and prints of persons in the APS’s collections to our online catalog, the name of Jacob (Meyer) Philadelphia (1720/1735–1795) caught my eye. He was a physicist, mechanic, and kabbalist. Kabbalah is sometimes translated as mysticism or occult knowledge, but it is part of Jewish tradition that deals with the essence of God. His biography, as shared by APS Member Julius Friedrich Saches (1842-1919), is particularly intriguing, as it notes that Philadelphia was likely a student of Dr. Christopher Witt (1675-1765). Dr. Witt, in turn, was affiliated with Johannes Kelpius (1667–1708), the leader of those known today as the “Monks of the Wissahickon.” Johan Jacob Zimmerman (1644-1693) of Germany was the original leader of the group of forty he called the “Chapter of Perfection”, but he perished in Rotterdam before they set sail for America in 1694. Here is their story.

In 1707, Zimmerman, a respected German mathematician, astronomer, astrologist, and Lutheran theologian, put everything on the line when he declared in Scriptura Sacra Copernizans, that as an astronomer and theologian, he concurred with Nicolaus Copernicus’ heliocentric model of the universe, or the controversial belief that the sun, not the earth, is at the center of our solar system. Zimmerman also called astronomer Claudius Ptolemy's geocentric model vulgar, and found little support when he denied that the Bible endorsed Ptolomy’s model, claiming instead that it supported Copernicus’.

Zimmerman’s approach to biblical interpretation separated him from his fellow Lutherans as he supported the inspired thoughts of shoemaker Jacob Bohme that God reveals Himself in nature and employs nature to effect spiritual awakenings. He came to agree with millenarism, the belief by a religious, social, or political group or movement in a coming fundamental transformation of society, after which “all things will be changed.” The idea that a new spiritual age was dawning was considered heretical in 1680s Germany, so Zimmerman was removed from his pastoral position in Wurttenburg and banished in 1686 along with his wife and eight children. Later, he published Scriptura Sacra Copernizans, a defense of Copernicus’ theories. Though our collection of prints in the Library doesn’t include Johan Zimmerman, the APS acquired an object around 1765 that has this description:

“This ornate sundial may be the APS’s most unusual instrument. It is known as the Dial of Ahaz, after the king of Judah. It’s creator, Christoph Schissler (1531-1608) of Augsberg, Germany, was one of the most renowned instrument makers of the 16th century….The Dial is embossed with Zodiac signs. The base illustrates the miracle described in the Bible (Isaiah 38:8) in which time was reversed and the shadow on a sundial moved backwards.”

According to merchant and historian Julius Sachse, the sundial, or as he called it, the horologium Ahaz, made its way to APS via the Christian and Christina Warmer family. The Warmer family acquired it from Dr. Christopher Witt, who received it from Maria Margarethe, Zimmerman’s widow. She had received the dial back from Johannes Kelpius in 1708, who originally received it from Zimmerman in 1693.

Following Zimmerman’s death in Rotterdam, Johannes Kelpius was chosen to lead the group to the Pennsylvania wilderness.

Kelpius was born in Transylvania and was a student and member of Zimmerman’s “Chapter of Perfection.” He was part of a group in Europe who called themselves Pietists who endeavored to make the Christian faith alive and vital in daily life and who wanted to break through the dogma and rigid church bureaucracy to find a soul satisfying spirituality. The community lived a life of contemplation and public service, sharing the benefits of their liberal education by serving as teachers, healers, religious leaders, lawyers, philosophers and scientists. In a letter to Hester Palmer of Flushing, New York, dated May 25, 1706, Kelpius described God as the Great Alchemist who transmutes our lead souls into gold.

Over the centuries, the group has been referred to by people outside of their community variously as The Hermits or Mystics of the Wissahickon, The Society of the Woman in the Wilderness (a name taken from a biblical passage in the Book of Revelation), and the Hermits on the Ridge.

Dr. Christopher Witt was born in England, emigrated to America in 1704 and affiliated himself with Kelpius’ group in the Wissahickon. He was a physician, astrologer, botanist, musician, clock maker, and more. His peers included Benjamin Franklin and John Bartram in Pennsylvania and he corresponded regularly with Peter Collinson in England and Duke Heinrich Friederich von Cumberland, brother of George III. Dr. Witt was beloved by many and his healing powers were so remarkable that some who were superstitious thought he had magical powers to impose and lift curses.

To complete the selective review from the prints collection, Jacob Meyer was introduced to William Augustus, Duke of Cumberland, by Dr. Witt so that the Duke might become his patron. The Duke agreed to this arrangement, and welcomed him to live on his estate. It was at this time that Jacob Meyer is thought to have changed his name to Jacob Philadelphia. In the 1760s, following the Duke’s death, Meyer/Philadelphia traveled throughout Europe lecturing and conducting experiments to great acclaim. He performed for Catherine the Great of Russia, Sultan Mustapha III of Constantinople, and read Frederick II of Prussia’s mind--which Frederick did not appreciate.