September 19, 2022
Share
David Ragnar Nelson is the Digital Projects Specialist at the Library & Museum of the American Philosophical Society. He earned... END_OF_DOCUMENT_TOKEN_TO_BE_REPLACED 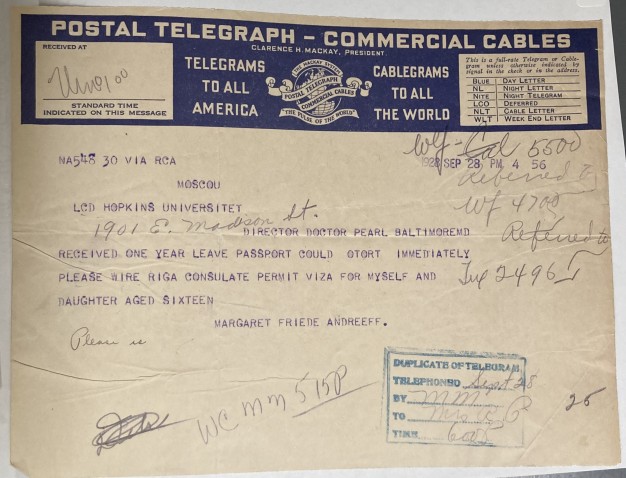 The Center for Digital Scholarship is currently preparing a project on women in science. This project will create a digital interface for exploring networks of women scientists in the collections of the American Philosophical Society. As part of this project, we are hunting down any mention of women scientists in the collections. We are particularly interested in scientists who have been forgotten by history, who accomplished noteworthy things but did not get their due.

I was hoping we could add this connection to the network. Danchakoff corresponded with Florence Rena Sabin and was a well-established figure in the network we are mapping. Unfortunately, I couldn’t find concrete evidence that she had any interaction with Friede-Andreev besides learning her name from Pearl, so this connection didn’t make the cut. But the two folders of correspondence between Pearl and Friede-Andreev revealed a fascinating story.

Pearl and Friede-Andreev seemed to have first met around 1909, while Friede was visiting the US and Canada to learn about the latest developments in poultry science in an effort to improve agriculture in Russia. Over the next two decades, they continued to correspond about poultry science, at times in great technical detail.

Following the establishment of the Soviet Union in 1922, Friede-Andreev’s letters became darker in tone. At one point, she regretted not having sent a letter sooner because she couldn’t afford postage. She claimed to have everything she needed to live, but her frustration, poverty, and meager existence become obvious in the letters. Nonetheless, her scientific correspondence with Pearl continued.

Towards the end of the 1920s, Friede-Andreev’s situation became more desperate. She wrote Pearl, asking for help publishing a paper in a US journal and finding a way to come to the United States with her daughter. Pearl and Friede-Andreev eventually concocted a plan to give her a staff position at the Institute for Biological Research at Johns Hopkins University, where Pearl was serving as director. Arrangements were made for a visa, and all seemed clear for her to depart. And yet she kept on getting delayed. In the last letters in the folder, written in the latter half of 1928, Pearl wrote to the American consulate, asking if there was a problem with her visa. The embassy reported all of her papers were in order and any delay must have been due to problems Friede-Andreev had with the “local authorities.”

At this point, the letters end. What happened to Friede-Andreev? What other collections or archives might her story be hiding in? If she and Pearl corresponded so much, why is there so little evidence of her elsewhere?

Our project with several similar narratives where small shreds of evidence are all we have to reconstruct the biographies of women scientists. The two folders of correspondence allow for a fairly complete account of a decade of Friede-Andreev’s life. For some scientists in our project, we have much less to go on. Nevertheless, by revealing these stories, we are taking an important first step towards filling the gaps in the history of science.