March 5, 2019
Share
Marian L. Christ is Assistant Librarian and Head Cataloger/Bibliographer. She received her MLS from Drexel University and BA from Beaver... END_OF_DOCUMENT_TOKEN_TO_BE_REPLACED 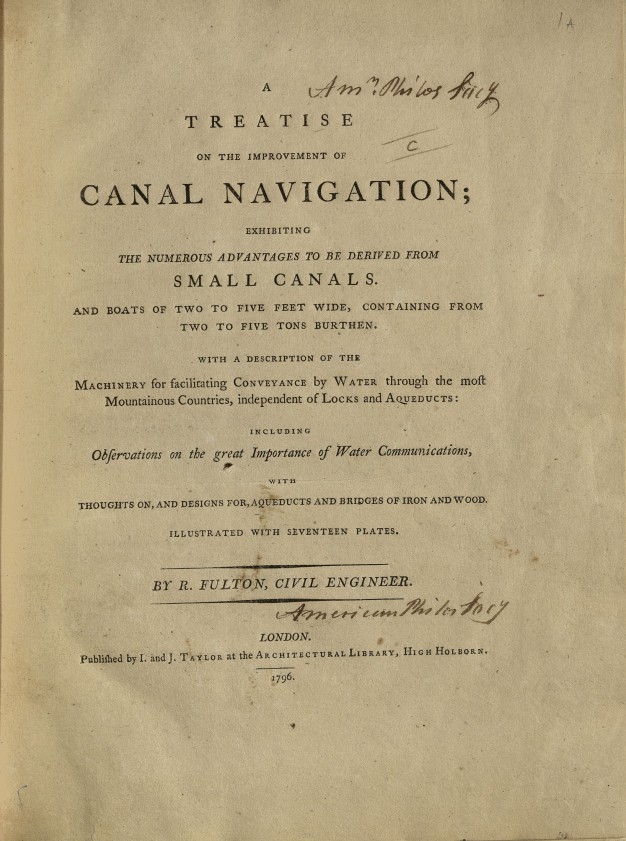 The American Philosophical Society Library holds many printed treasures, including Robert Fulton’s Treatise on the improvement of canal navigation … London, 1796. (626: F95t). Robert Fulton (1765-1815) was a renaissance man; during his long career as an inventor and entrepreneur, his accomplishments included the invention of an operational submarine and, most notably, a commercially successful steamboat.

Fulton, however, began his working life around 1780, apprenticed to a Philadelphia silversmith. Silversmiths were highly respected, but Fulton disliked the work and found the means to buy back his indenture and set himself up as a miniaturist. In the late 1780s, he traveled to England to study with the artist Benjamin West. Fulton pursued art for seven years, and did gain several commissions on his own. He achieved some success; but he had not made much progress by the standards set by the Royal Academy. He sought a change—one that would support him. He used the talents he had developed as a silversmith and miniaturist in Philadelphia and combined them with mechanical techniques to design an instrument for cutting and polishing marble. His model of this instrument received the coveted silver medal of the the Society for the Encouragement of Arts, Commerce and Manufactures. Encouraged by this success, Fulton switched his attention from painting to engineering.

He began by seeking to improve the terrible transportation system in certain counties of England and focused on canal construction, particularly the problems involved in raising a canal boat from one level to another by the lock system when water was in short supply. Fulton proposed doing away with locks and substituting either inclined planes with rails on which the boats could be drawn, or vertical lifts or hoists, as shown in the plates from his Treatise. He obtained a 1794 patent for raising canal boats by ramps (the only English patent he ever received) and his Treatise contains projections for canal digging devices, aqueduct plans, and methods for designing canal networks.

Fulton published this elaborate work (158 pages and 17 engravings) with the backing of the Peak Canal Company, which was building a canal near Manchester. Ironically, the Peak Forest directors ignored the book they had commissioned. Their lack of support mirrored the general response to Fulton’s Treatise, which contained conceptually brilliant ideas that required yet undeveloped technology to apply them. Fulton refused to be discouraged and continued to seek out investors; he remained interested in canal systems for the rest of his life.