May 13, 2020
Share
Cynthia Heider is the Digital Projects Specialist at the APS Center for Digital Scholarship, working to increase the digital accessibility... END_OF_DOCUMENT_TOKEN_TO_BE_REPLACED 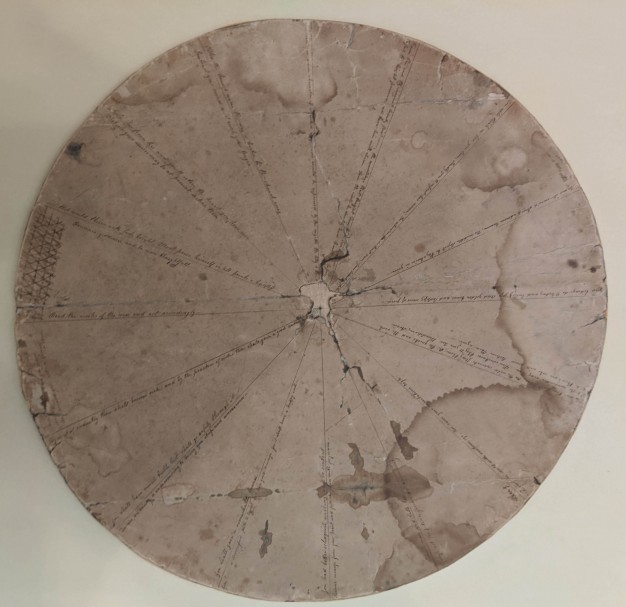 There are few things as tantalizing to the imagination as finding a mysterious object in an archival collection, especially one that's already full of more thoroughly-investigated treasures from the life of a famous showman. So I was intrigued when I came across an unassuming cardboard circle, maybe three feet in diameter, in the Peale-Sellers Collection. The circle’s front side is divided into sixteen wedges, each with one or two slogans penned in fading brown ink. It’s stained, spotted, and riddled with tiny holes like the ones left by thumbtacks in the corners of a poster. Written on the wheel’s back is a single, cryptic phrase: “Fortune telling wheel made by Chas. Willson Peale.” This appears to be the sum total of what we know about this object.

Charles Willson Peale looms large in historical memory as a famed Early American portrait artist, museum proprietor, and father of ten children he named after Early Modern artists. Peale and his family members operated a museum in several successive locations in Philadelphia (including, at one time, the American Philosophical Society building) from 1784 to roughly 1849. Two other branches were opened in Baltimore in 1814 and New York City in 1825, and together the museums housed a number of natural history specimens, scientific apparatuses, and objects which we would call "oddities" today. Supremely interested in illusion, spectacle, and wonder, Peale's museum also featured exhibitions of cut-paper "physiognotrace" silhouettes, "moving" picture shows, and spooky "phantasmagoria" optical illusion displays to amaze and entertain his audiences.

The fortune-telling wheel seems like a terrific party trick, the kind of thing that Peale would have embraced. In this particular game, thrill-seekers would spin the cardboard circle, close their eyes, prick a pin into one of the wedges, and then read the corresponding bit of ghostly advice. With its combination of several technologies, chance-driven outcome, and supernatural overtones, the fortune wheel would have fit right in at Peale’s Philadelphia Museum.

I thought it might be fun to recreate the experience for the 21st century, so I created an interactive web version of the “Fortune Wheel.” Each fortune appears on the original wheel. So step right up and try your luck!

I may write more about what I found when I did a little research, along with better photographs and some suggestions for further reading on this type of artifact. But as I work from home under the coronavirus-imposed 'stay-at-home' order, this may have to suffice for now!