October 24, 2022
Share
Marian L. Christ is Associate Librarian and Head of Cataloging. She received her MLS from Drexel University and BA from... END_OF_DOCUMENT_TOKEN_TO_BE_REPLACED 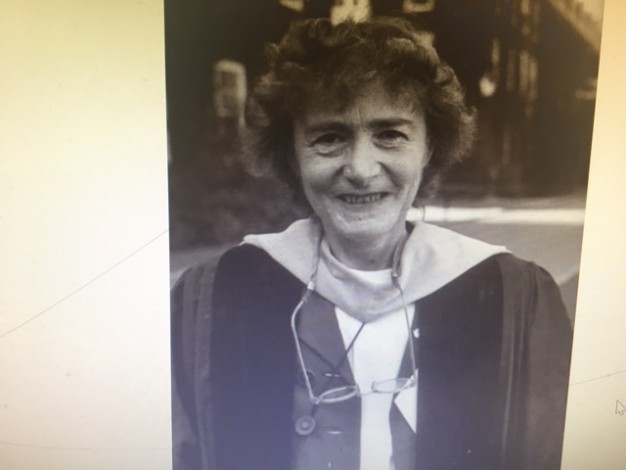 Gerty Theresa Cori (née) Radnitz, an Austro-Hungarian and American biochemist, was elected to the American Philosophical Society in 1948, the year after she became the first woman to win the Nobel Prize in Physiology or Medicine, and the third woman to win a Nobel Prize in science.

Gerty Radnitz was born in Prague to Jewish parents in 1896, when it still was part of the Austro-Hungarian Empire. She studied at home until age 10, then attended a girls’ preparatory school, graduating in 1912. This was a time when women had few educational opportunities in any field, especially science, but Gerty, encouraged by her uncle, a professor of pediatrics at the University of Prague, applied to medical school. She discovered that she would not be accepted without significant supplemental education: the equivalent of eight years of Latin, and five years of mathematics and science. She met these goals in a year. She enrolled at Carl Ferdinand University, the German University of Prague, where she found the two loves of her life: medicine and Carl F. Cori (elected to APS in 1947). He said of her: “She was a fellow student, a young woman who had charm, vitality, intelligence, a sense of humor, and love of the outdoors–qualities which immediately attracted me.” They received their medical degrees together in 1920 and married later the same year.

Both found work, although in different places, after graduation. These were troubled times in Europe. The Austrian Empire was disintegrating and Prague became the capital of the new country of Czechoslovakia. Food was scarce, and Gerty suffered from malnutrition which caused her to develop xerophthalmia (a severe Vitamin A deficiency); fortunately, she improved her diet before any permanent damage was done. At the same time, Carl Cori’s work environment showed him that, although Gerty had converted to Catholicism before they married, her Jewish heritage would prevent them from obtaining academic positions in an increasingly anti-Semitic Europe.

They decided to immigrate to the United States in 1922 and began their professional life together at the New York State Institute for the Study of Malignant Diseases (now Roswell Park Cancer Institute) in Buffalo, NY. They became citizens in 1928. From the time of their first joint publication in 1923, it was impossible to separate Gerty and Carl Cori’s contributions, but their first position in New York demonstrated the dismissive attitude towards women in science Gerty faced for years. The Coris, committed partners in both their work and their marriage, often were discouraged from working together in their investigations of carbohydrate metabolism which ultimately led to the Nobel Prize. The director of the institute in Buffalo threatened to dismiss Gerty if she did not stop working with her husband, and although they ignored the threat (and remained employed), they faced similar situations even after they left the institute. Carl refused a position at the University of Buffalo because the school would not allow him to work with his wife, and during another job screening, the interviewer told Gerty that it was “un-American” for a married couple to work together.

In 1931, Washington University in St. Louis, Missouri offered both of them jobs, although Gerty’s position and salary were much lower than Carl’s and came with warnings about harming her husband’s career. It would be years before the university acknowledged her contributions and gave her a position commensurate with her husband. There also were many good times—the birth of a son, satisfying, valuable work, and mentoring scientists in their laboratory at the university—six of whom went on to win Nobel Prizes themselves. When the Coris received the Nobel Prize, and worldwide recognition, Washington University made Gerty a full professor. Unfortunately, in that same year of 1947, Gerty Cori was diagnosed with bone marrow disease. Her first job after graduating from medical school involved working with X-rays, and studying their effect on the human body; possibly this contributed to her illness. She fought the disease for ten years, devoting as much time as she could to her work, and died at home in 1957.

Gerty Cori’s fierce intellect and natural optimism allowed her to move forward in her life and work through gender discrimination and nepotism rules, and won her significant recognition. Some of her awards (she won many others with her husband): she was the fourth woman elected to the National Academy of Sciences. She was a member of the American Society of Biological Chemists and the American Chemical Society. President Harry S. Truman appointed her to the board of the National Science Foundation, a position she held until her death. She was inducted into the National Women’s Hall of Fame in 1998.

In an obituary written for Science in 1958, APS member Severo Ochoa wrote: “Those who knew Gerty Cori admired the rare combination of human attributes which resulted in the harmonious personality that was so engaging, a rich, open personality in which an astonishing drive for action was uniquely blended with an unusually gentle, kind, and charming nature.”

And there are Gerty Cori’s own words about her life in a statement of her personal philosophy submitted to the National Academy of Sciences in 1954 and aired in an Edward R. Murrow radio broadcast:

“... Honesty–which stands mostly for intellectual integrity, courage, and kindness–are still the virtues I admire, though with advancing years, the emphasis has been slightly shifted, and kindness now seems more important to me than in my youth. The love for and dedication to one’s work seems to me to be the basis for happiness. For a research worker the unforgotten moments of his life are those rare ones, which come after years of plodding work, when the veil over nature’s secret seems suddenly to lift, and when what was dark and chaotic appears in a clear and beautiful light and pattern.”