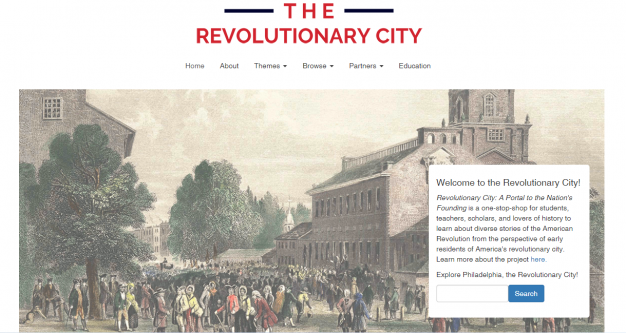 Philadelphia, PA, [March 9, 2022] – When the world suddenly turned to work-from-home schedules and remote teaching and learning in spring 2020, research and special collections libraries had to quickly learn how to serve researchers that often relied on accessing collections in person. One of the few silver linings of the shift to virtual programming and research has been the erasure of geographic boundaries in reaching audiences. While the demand for remote access to collections has grown, scholars seeking careers in the humanities face even more uncertainty in the job market. To address both of these issues, the American Philosophical Society (APS), the Library Company of Philadelphia (LCP) and the Historical Society of Pennsylvania (HSP) are collaborating on a grant from the National Endowment for the Humanities (NEH) American Rescue Plan: Humanities Organizations (SHARP) program which aims to secure jobs in the humanities.

This grant will support 11 early career contingent scholars and staff members as they digitize materials for The Revolutionary City: Digitizing the Hidden Stories of Philadelphia, 1774-1783 (therevolutionarycity.org). With the 250th anniversary of our nation’s founding approaching in 2026, the three Philadelphia libraries will populate an innovative digital portal with a planned 36,000 pages of material to uncover hidden stories from Philadelphia’s revolutionary past.

This portal is breaking down the institutional barriers between these archives, allowing users to discover stories that had previously been obscured by the physical separation of collections. Both the APS and LCP, founded by Benjamin Franklin, and the HSP, founded to celebrate the memory of the Revolution, hold large and invaluable collections related to the American Revolution and the early national period. The portal will also go beyond the well-known stories of the founders like Franklin and Jefferson, gathering the stories of people of color, Native Americans, women, and working class people that are scattered across these collections. Americans looking for materials that help them see themselves in the story of the nation’s founding will be able to turn to Revolutionary City to see how people of diverse backgrounds all played a part in the creation of a new nation.

The materials represented in the Revolutionary City were selected through consultation with 16 educators in K-12 and higher education, archivists, and public historians. These consulting stakeholders also helped identify metadata terms that would allow researchers, students, or others using the portal to discover sources relevant to their interests in topics like women’s experiences in the Revolution, prisoners of war, and Quakers and other religious groups. The use of enhanced metadata will allow those who use the portal to get information about sources beyond the typical metadata terms of title, creator, and date. For example, letters from Julia Rush to her husband Benjamin Rush reveal the ways motherhood, politics, medicine, and child care all intersected in the family’s life.

“By digitizing and cataloguing this huge cache of manuscripts, including diaries, letters, and account books, we hope Revolutionary City will provide one of the most complete views of the American Revolution as experienced in Philadelphia. We know there are unknown stories and perspectives that are just waiting to be found and shared, and we hope Revolutionary City will be the platform for students, researchers, and scholars to make these discoveries,” said Librarian and Director of the APS’s Library & Museum Patrick Spero.

Bringing these many stories together will require work from talented scholars with expertise in the fields of Early American history, digital scholarship, and information management. This grant will give early career scholars the opportunity to contribute to an innovative project and keep them employed in their desired fields.

When The Revolutionary City portal is populated with over 36,000 pages of personal diaries, correspondence, newspapers, pamphlets, broadsides, and business court documents, it will be a valuable resource for interested individuals, teachers introducing primary sources to the classroom, scholars accessing collections for their research, and countless local, state, and regional organizations looking to commemorate the semiquincentennial of America’s founding in a way that truly reflects their communities.

“We are thrilled to be a part of the Revolutionary City project and to share our collections through it.  Like APS, the Library Company isn’t just a collection of items from early America, it is a surviving piece of early America itself. We were there. Revolutionary City allows us to tell our story of how ordinary Philadelphians understood and contributed to the struggle for independence,” said Michael Barsanti, Edwin Wolf 2nd Director of the Library Company of Philadelphia.

The American Philosophical Society, established in 1743 by Benjamin Franklin for the purpose of “promoting useful knowledge,” is the nation’s oldest learned society. An intellectual bedrock of the early United States, the APS counts nearly all of the nation’s founders as Members of the Society. Election to Membership honors those who have made exceptionally significant contributions to science, the arts and humanities, and public life. The Society promotes scholarly research through its Library, including 40 fellowships each year, and through its research grant program. The Society sustains an informed citizenry through twice-yearly meetings and topical conferences and symposia. Public programs and museum exhibitions, which often draw close to 200,000 visitors annually, are inspired by the APS Library & Museum collections, which include 14 million pages of manuscripts, 275,000 books, and approximately 3,000 artifacts and fine art objects. The collection is strongest in early American history, Native American history and culture, and the history of science. APS publications are dedicated to publishing research that reflects a broad range of useful knowledge and is the oldest continuously operating scholarly press in the country.

About the Library Company of Philadelphia

The Library Company of Philadelphia is an independent research library concentrating on American society and culture from the 17th through the 19th centuries. Free and open to the public, the Library Company houses an extensive non-circulating collection of rare books, manuscripts, broadsides, ephemera, prints, photographs, and works of art. Our mission is to foster scholarship in and increase public understanding of American history before 1900 by preserving and interpreting the valuable materials in our care. The Library Company connects with thousands of visitors annually, ensuring that the lessons of the past will continue to amaze, instruct, and inspire future generations. We serve a diverse constituency throughout Philadelphia and the nation, offering comprehensive reader services, an internationally renowned fellowship program, online catalogs, and regular exhibitions and public programs.

About the Historical Society of Pennsylvania

The Historical Society of Pennsylvania, founded in 1824, is one of the nation’s largest archives of historical documents. We are proud to serve as Philadelphia’s Library of American History, with over 21 million manuscripts, books, and graphic images encompassing centuries of US history. HSP serves more than 4,000 on-site researchers annually and millions more around the globe who use its online resources. HSP is also a leading center for the documentation and study of ethnic communities and immigrant experiences in the 20th century, and one of the largest family history libraries in the country. Through educator workshops, research opportunities, public programs and lectures throughout the year, we strive to make history relevant and exhilarating to all.