May 15, 2019
Share
With a background rich in both the liberal arts and in technology, Michael Miller holds a Bachelor of Arts degree... END_OF_DOCUMENT_TOKEN_TO_BE_REPLACED 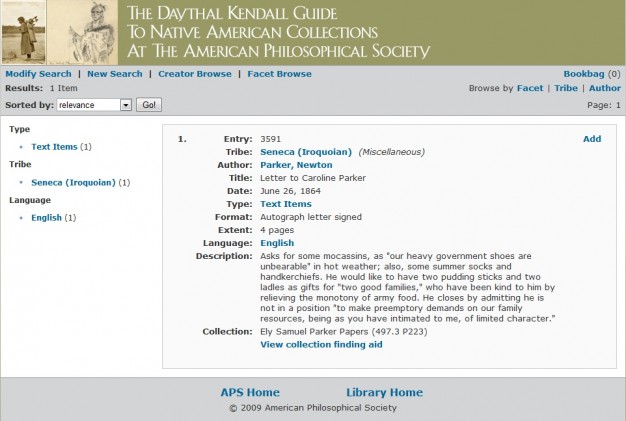 In 2018, the American Philosophical Society (APS) celebrated its 275th anniversary. It is such a privilege and a treat to work at a place that not only preserves history, but has a history of its own. Much of what we do as archivists at APS is to build on the work of our predecessors.

Describing manuscript materials is an iterative process. As technologies and research strategies change, it becomes necessary to migrate collection and item descriptions to different platforms, making the material accessible to the researcher of the present day. In this data migration process, descriptions of materials can get corrupted, sometimes in comical ways.

In 1965, John Freeman and Murphy Smith printed a book, the first subject guide on Native American materials at APS, A Guide to the Manuscripts Relating to the American Indian in the Library of the American Philosophical Society (506.73 Am4me v.65).

In the early 2000s, the first digital version of this printed guide was created for the APS website, in a basic text-on-screen format. Optical character recognition (OCR) software was used to accomplish this. The end product left something to be desired, as OCR is notorious for incorrectly identifying letters. For example, the Ely Samuel Parker Papers (Mss.497.3.P223) were mistakenly identified as the Fly Samuel Parker Papers.

A description of a letter in the Parker Papers in this early online guide contained an additional amusing error. Ely Samuel Parker’s younger brother, Isaac Newton Parker (1833-1870), served as a sergeant in the 132nd New York Infantry during the Civil War. His regiment was stationed in North Carolina, and during a period of inactivity, he wrote a letter home to his sister Caroline Parker Mountpleasant (1830-1892).

In the letter dated June 26, 1864, Newton asked Caroline to send him some provisions and gifts for two families who had been kind to him. What were the gifts? According to the online subject guide, Newton wanted to give the families two pudding sticks and two ladies as gifts to show his gratitude.

Of course, the subject guide should have read “ladles,” not “ladies.” The amusing typographical error has since been corrected.

Whether researchers are looking for pudding sticks, ladles, or ladies, the APS online finding aids and subject guides are valuable tools, aiding in the quest for useful knowledge, and in the search for useful cooking implements.

The Material History of a Printed Landmark of American Science