The Many Portraits of Robert Patterson

Janine Yorimoto Boldt is the 2018-2020 Andrew W. Mellon Foundation Postdoctoral Curatorial Fellow. She is lead curator for the 2020... END_OF_DOCUMENT_TOKEN_TO_BE_REPLACED 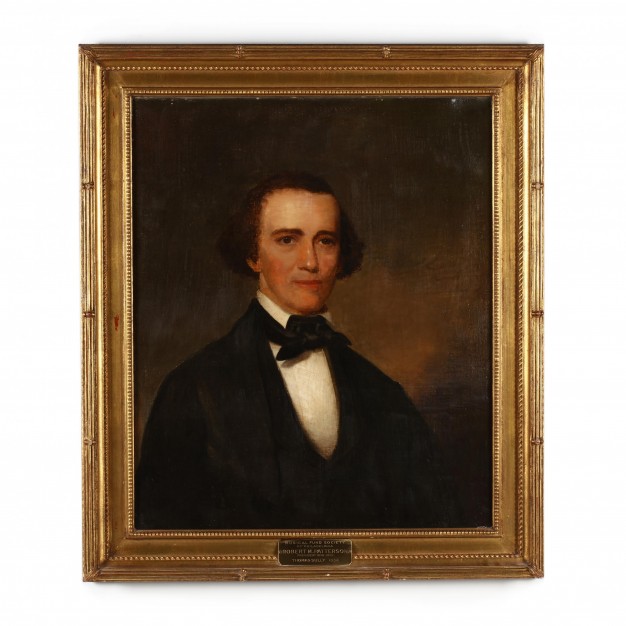 The American Philosophical Society recently acquired its third portrait of Robert Maskell Patterson (1787-1854); this one by the renowned artist Thomas Sully painted in 1866 (above). Why would the APS need three portraits of the same person?

Patterson was a chemist, mathematician, and physicist. He was a professor at both the University of Pennsylvania and at the University of Virginia. He was the sixth director of the U.S. Mint in Philadelphia, belonged to the Academy of Natural Sciences, and helped found both the Franklin Institute and the Musical Fund Society of Philadelphia. He was elected to the APS in 1809, its youngest member to date at age twenty-two, and served as the APS Secretary, Vice President, and finally, as the President (1849-1854). He wrote an early history of the APS in 1842 and the APS also has a collection of his papers and notebooks.

In 1855, shortly after his death, the APS acquired its first portrait of Patterson directly from his wife, Helen. The artist of this portrait was Samuel F. Dubois, Patterson’s nephew. According to family, the portrait was a "likeness, but fails to express the refinement & intelligence of the original." Finding it lacking, they donated it to the APS.

Dubois had studied at the Pennsylvania Academy of Fine Arts under Thomas Sully and had previously painted portraits of Patterson for both the U.S. Mint and the University of Virginia. In 1866, the Musical Fund Society commissioned Sully to paint a portrait of Patterson. Sully, an APS member since 1835, asked the APS for permission to copy the Dubois portrait in their collection. This is the portrait by Sully recently acquired by the APS.

The APS has a special interest in the artist Thomas Sully. Sully was a member of the APS, plus he actually had a studio in the APS’s Philosophical Hall in the 1820s.

The Dubois and Sully portraits not only allow for a comparative study, but also a study of portraits by a teacher and student. Comparing the two portraits allows us to see how artists working in different styles could paint a portrait of the same subject that results in very different representations of the sitter. Thomas Sully was an English-born artist who worked in an idealized, romantic style associated with British painting and favored by many patrons for expressing refinement. His brushstrokes, coloring, and lines were soft. (One wonders if Patterson’s family would have thought Patterson appeared refined and intelligent enough in Sully’s portrait – qualities they found lacking in Dubois’ painting.)

Despite being a former student of Sully’s, Dubois painted with crisper lines and more facial modeling. He was influenced by early photography and its realism. He had opened a daguerreotype studio in Doylestown by 1847. Dubois also was influenced by the traveling painters who worked in rural areas painting the middling classes. These artists are often called limners or folk artists to distinguish them from formally-trained artists (like Sully) who tended to cater to more elite patrons. These itinerant artists tended to paint with bolder colors and lines. Apparently, the Pattersons were not particularly impressed with this style, possibly because of its rural and middling class associations.

What about the third portrait I mentioned earlier? Check back later for part 2 and to learn more about the APS’s portrait of Patterson by the artist James Reid Lambdin.

Related
The Many Portraits of Robert Patterson, Continued (Post 2)