Janine Yorimoto Boldt is the 2018-2020 Andrew W. Mellon Foundation Postdoctoral Curatorial Fellow. She is lead curator for the 2020... END_OF_DOCUMENT_TOKEN_TO_BE_REPLACED 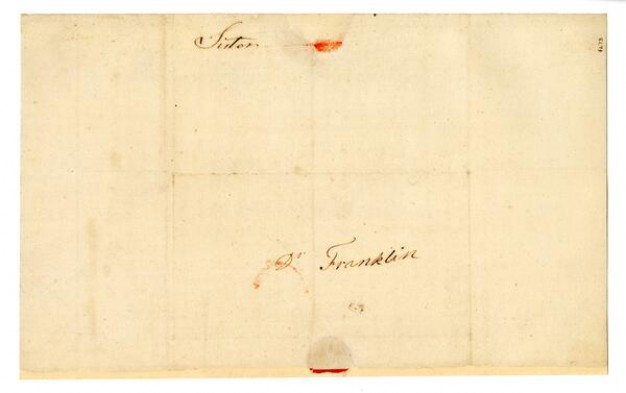 About one year ago, I began researching for the 2020 American Philosophical Society exhibition, the theme of which was “Benjamin Franklin’s science.” As lead curator, I had to decide: what kind of story about Franklin and science did I want this exhibition to tell?

Early during the research phase, I came across an exchange of letters between Jane Franklin Mecom (1712-1794) and Benjamin Franklin and was immediately inspired. Mecom was Franklin’s beloved younger sister. They exchanged letters for pretty much their entire lives. In a letter dated July 4, 1786, Franklin told Mecom that she should not apologize for her “bad Spelling” in previous letters because she always spelled out words phonetically. Franklin assured her that was a perfectly sensible way to write. Then he told her about an educated man and woman who could not figure out that “yf” was a phonetic spelling for “wife.” According to Franklin, “yf” was “a much better as well as shorter Method of Spelling Wife, than by Doubleyou, i, ef, e, which in reality Spells, Doubleyifey.” To prove this point, he noted that the couple’s chambermaid, Betty, immediately recognized that “yf” was pronounced “wife.”

On July 21, 1786, Mecom responded to Franklin by stating that “sometimes the Betys has the Brightest understandings.” The “Betys” – undereducated, working-class women – could indeed be society’s brightest. Perhaps Mecom saw Betty as a kindred spirit and counted herself among the Bettys of the world. At the very least, it seems Betty’s story made Mecom reflect on the relationship between intelligence, education, and status. Mecom then briefly summarized the moral philosopher Dr. Richard Price:

“Dr. Price thinks Thousands of Boyles, Clarks and Newtons have Probably been lost to the world, and lived and died in Ignora[s] and meanness, mearly for want of being Placed in favourable Situations, and Injoying Proper Advantages, very few we know is Able to beat thro all Impedaments and Arive to any Grat Degre of Superiority in Understanding.”

Specifically, Mecom wrote about inequality, wondering how many potential Sir Robert Boyles, Samuel Clarkes, and Sir Isaac Newtons (all well-known, elite philosophers and men of science) have been “lost to the world” because they were not born into wealth or status, which give people advantages in life. Then Mecom continued, adding her own reflection by saying that as “we know,” few people are able to rise above disadvantageous positions in life and “beat thro[ugh] all Imped[i]ments” that prevent someone from obtaining education or training that would allow them to improve their mind.

Those two words are powerful. They show Mecom’s self-awareness of her situation in life and gently remind Franklin about where he came from. Franklin and Mecom were born into a working-class family. Mecom was not formally educated. She was probably taught to read and write by her mother, but she remained self-conscious about her spelling her entire life, sometimes apologizing to Franklin for it. She married young, at age 15, and her husband never adequately supported the family. She had to work hard to financially support herself and her many children. In her old age, she relied on her brother to pay for her housing. Franklin himself had to leave school at age 10 and was destined for a life as a working-class man, like his father, his brothers, and other male relatives. However, he managed to beat through impediments to join the elite ranks of Boyles, Clarkes, and Newtons. He was hard-working, smart, stubborn, and probably a bit lucky. And as Mecom acknowledged, it was not always easy for him.

Yet, Franklin enjoyed some advantages. As a white man, he could move through colonial and British society with more freedom than a woman or a person of color. That allowed him to benefit from patronage and institutions that promoted science in the 18th century.

Mecom’s letter inspired me to think differently about Franklin and science. Franklin’s success as a scientist made him internationally famous. He used his fame, wealth, and privilege to help others. He founded and patronized a number of civic institutions and learned societies, bequeathed scholarship money to working-class boys who could otherwise not afford to go school, and aided family and friends. His last will included a number of passages that indicate his awareness of his unlikely rise to wealth and privilege. At one point it stated, “having myself been bred to a manual art, printing, in my native town, and afterwards assisted …I wish to be useful even after my death, if possible, in forming and advancing other young men.” However, his will and the scientific institutions he was involved with continued to privilege white men.

The APS exhibition that developed, which turned into Dr. Franklin, Citizen Scientist, was inspired by Mecom and her July 21, 1786 letter. The exhibition attempts to draw attention to the relationship between science and inequality, as well as the ways that science and education can improve society for all. The life and works of Benjamin Franklin allow for this interpretation because he also thought about these issues. My co-curator, Emily Margolis, and I hope that many visitors will walk away thinking about Mecom’s letter. How many great minds have been lost to the world because they were born into disadvantageous situations? What about the Janes and Bettys of the world – or Franklin’s other sisters, Elizabeth, Hannah, Anne, Mary, Sarah, and Lydia? Why does history remember some people and not others?

Dr. Franklin was not a perfect man, but he was a great one. As we consider the legacy of this founding father, we should remember his sister and other people lost to the world. I like to think he would want us to – and I like to think that Jane would enjoy knowing that she has not been lost.

The Franklin papers, including his correspondence with Jane Franklin Mecom and his last will and codicil, are freely available at www.franklinpapers.org.

If you would like to read more about Jane Franklin Mecom and her relationship with her brother, see Book of Ages: The Life and Opinions of Jane Franklin by Jill Lepore (2013).