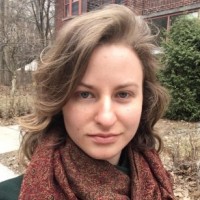 Rebecca Jackson is a Ph.D. Candidate in History and Philosophy of Science and Medicine at Indiana University – Bloomington (IU-B)... END_OF_DOCUMENT_TOKEN_TO_BE_REPLACED

While digging into Virginia Apgar’s correspondence in the APS's Library & Museum collections, I discovered that she was not only a trailblazing physician and researcher worthy of a US Postal Stamp, but also a clever writer with a sense of humor. Take for example, her signature line in a letter to Ashley Montagu (see below). Montagu, a highly influential biological anthropologist, had written to Apgar asking her to critique a draft of his book, Prenatal Influences.

When Apgar received his letter in 1961, she was already a renowned pioneer in neonatology research and was working as the Director of the Division of Congenital Malformations at The National Foundation. After accepting Montagu’s invitation to edit, Apgar later wrote back with the salutation, “Dear heterogamete Montagu,” a gesture to his chromosomal research.

This humorous simplification of male-ness and female-ness (referencing XY and XX chromosomes) allowed for Apgar to play up, rather than down, her unusual status as a female doctor and scientist amongst the “heterogametes.” Montagu was the right audience for this kind of repartee; he supported women’s equality and participation in the sciences and beyond. In the same year that Apgar developed her seminal APGAR Score for assessing the health of newborn babies, Montagu published a book called The Natural Superiority of Women (1952).[1]

After receiving Apgar’s feedback, Montagu even tried to convince her to write the book’s introduction, saying he owed her “immense, monolithic, and innumerable thanks” for her criticisms, noting that “none of the other readers picked up on” a mistaken assumption he made related to fetal oxygen levels in utero (APS 1961, July 27). She responded, “I hate to write as much as you like to,” and declined because she was “still struggling with [finishing] a paper which should have been out three years ago”—meanwhile her administrative work as a Director at The National Foundation was “increasing daily” (APS 1961, Aug. 7).[2]

Apgar’s correspondence broadens our view of the scientific work she accomplished. While her name was not directly attached to said achievements, this work still had a rippling impact on 20th-century life sciences—from genetic research, to fetal development, to anesthesiology. Of course, her own publications had a lasting impact on both the academic and popular understanding of neonatal care and development (e.g., Apgar 1953; Apgar and Beck 1972). Yet, looking only at her published work does not come close to capturing her total impact as a “midwife” of ideas. Only in her correspondence do we get a colorful picture of a female life in science.

The by-line that Apgar used in her correspondence with Montagu, “Homogametically, yours,” offers insight into the way that she chose to navigate her career in science. She chose to highlight (not hide), her femaleness as a part of her professional life. On another occasion, she wrote to geneticist Curt Stern and asked him to send her his portrait, to be placed beside that of embryologist George Washington Corner in her office at the National Foundation. She jested that she trusted Stern (who was in his 60s at the time) would only send his photo with the consent and in the presence of his wife (APS 1965, July 27)! Though playful, this correspondence reminds us that there were real fears at this time about professional and highly educated women being a danger to the otherwise stable marriages of professional men. Making light of the paranoia surrounding women in the scientific workplace probably helped lighten those tensions.

If we want to tell fuller stories about the impact women had on 20th-century life sciences, and how they navigated a world of “heterogametes,” we must look beyond published papers and books. We must dig into the archives for notes, letters, and other ephemera. These materials better illuminate not just the work of women, but also scientific work more generally as a labor-intensive group effort. If we want to understand and tell richer histories of how science works, the names on a book’s cover or at the top of a published article are not the only names that are important to know. To find the names that are missing requires a bit more ingenuity; we may find them on a thank-you note written on the back of a napkin, or on thin, difficult-to-digitize carbon-copy paper with typewriter ink smudged on the margins.

Understanding science as a laborious process renews the relevance of archival collections. That is where we will be able to discover the unsung contributions and clever navigation of great women, and other marginalized thinkers, who helped carry ideas to term. The archive is where we find those signatures.

[1] Apgar herself was never explicitly involved in any women’s movements, famously dismissing, “Women are liberated from the time they leave the womb.”

[2] Note that Virginia Apgar is acknowledged on Page x of Montagu’s Prenatal Influences (1962), which also cites her research several times throughout the text.

Apgar, Virginia, and Joan Beck. 1972. Is My Baby All Right? A Guide to Birth Defects. Trident Press.