November 20, 2018
Share
Ms. Joyet is the Assistant Head of Cataloguing. After graduating from Drexel University's iSchool in 2009, Ms. Joyet was hired... END_OF_DOCUMENT_TOKEN_TO_BE_REPLACED 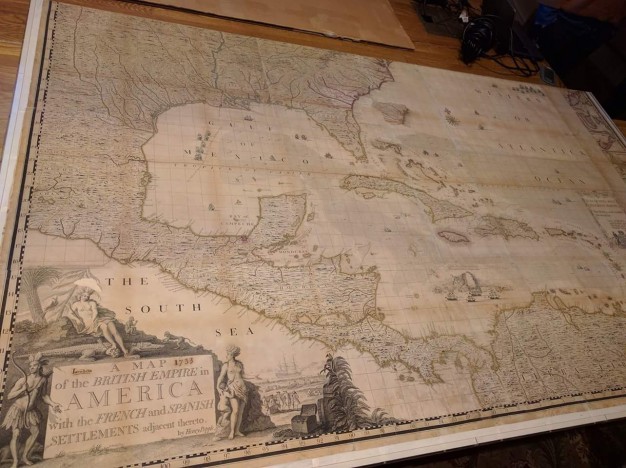 There is much that has already been written about “A map of the British Empire in America with the French and Spanish settlements adjacent thereto”; or “The Popple Map.” Created by Henry Popple in the 1730s, it was the first large scale and most accurate map of North America at the time. This map can be found as a kind of atlas of 20 sheets, as individual sheets, or as a composite map of the 20 sheets joined in some manner. The APS version is a composite map of 20 sheets in four parts, mounted on Japanese paper and framed in two sections.

In bibliographical studies, we make distinctions between edition, state, and issue. Sometimes, these terms can seem more like publishing advertising schemes; other times, there are real differences. A new edition is when type has been reset and printed again. A first edition can have several issues, depending on the popularity of a monograph. If the type is not taken out of the press and another run is printed, that run is called a second issue. If the type is taken out of the press, then reset and run, that run is called a second edition.

For maps and graphics, these terms can become muddled, since no type is set. Maps require that plates are created and canceled. A plate for map could be a lithograph or a woodcut, for example. These images are created once, then printed as many times as necessary. Some plates are canceled because they are worn out; others are canceled because the information they contain is obsolete. When a new image is created for a new printing, that is a new state. Because maps are generally engraved graphic works, the APS uses the term state instead of edition when describing maps.

The running title at the head of this map “America Septentrionalis” is from the first state, or the first plate printing. The second state did not have the header title. We know that the rest of the map is from the second and not the third state because South Carolina and Georgia are not very detailed in the APS version of the map. In the third state, or printing, of the Popple map, Georgia and South Carolina have been pasted into the middle of the Atlantic Ocean, providing more detail of those areas. In short-the APS copy of the Popple map is a jumble of printings—someone clearly pasted different sheets from different printings of the map together.

This cut-and-paste use of this map shows that it was heavily used and not regarded as particularly special by its original owners. In addition to pasting other states onto this map, someone noted in ink Cape May and Cape Henlopen—certainly not something that any current APS staff member would do!

This particular version of the Popple Map was donated in 1834 by Edward Florens Rivinus (1801-1873). Rivinus was a “German immigrant who …. was active as an editor, library cataloguer, and translator in several fields, but his most important contributions were in medical science, his profession.”(1) 142 years later, it hung in Independence Hall as part of the United 1976 Bicentennial Exhibition of the Library Company of Philadelphia, Historical Society of Pennsylvania, and the American Philosophical Society.