December 6, 2018
Share
Processing archivist, page in the reading room. Prior to relocating to Philadelphia from the Boston area, was the curator of... END_OF_DOCUMENT_TOKEN_TO_BE_REPLACED 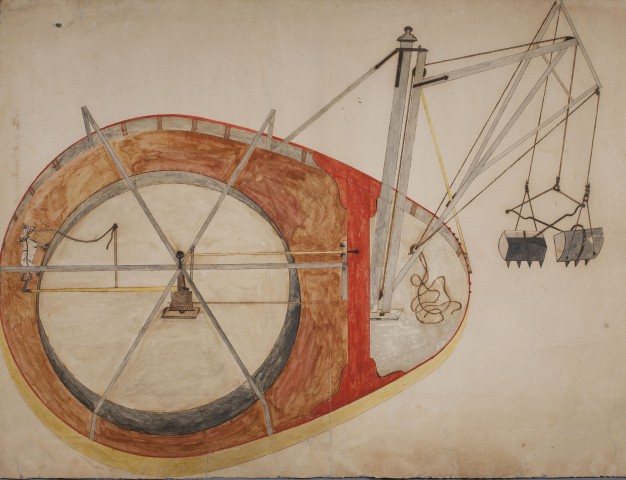 One of the pleasures of re-arranging the oversize collection has been the discovery of drawings given to the APS in the 18th century. One of my favorites is the colored drawing of a dredging machine invented in 1773 by Arthur Donaldson (1734-1797). He named his machine The Hippopotamus and invented it for the purpose of deepening harbors and other water passages. It is operated by a horse walking in circles to draw a crane up and down and around on a flat bottom boat. In addition to the horse, the dredger is operated by three hands maneuvering a shovel with ropes and capable of raising 60–80 tons of mud and gravel per day; it is 30 feet long and 20 feet wide.

Preserved in the manuscripts vault are the APS Minutes of March 19, 1773 that reference the invention: “Mr. Rhodes informed the society that Arthur Donaldson of Southwark, is constructing a machine for cleaning docs….The society, desirous to encourage so useful an invention….” encouraged him to present the idea to the Pennsylvania Assembly for funding.

At a later meeting on July 18, 1773, a model of Donaldson’s Hippopotamus was presented to the membership to view and discuss by fellow member Mr. Gilpin.

Leave the manuscripts vault and head to the rare books vault; there you can find a 1775 edition of the Pennsylvania Magazine in the Paine collection describing the usefulness and mechanics of the machine in infinite detail. In this volume, we learn that the Pennsylvania Assembly resolved: “That the sum of one hundred pounds be allowed and given to the said Arthur Donaldson as a reward for his ingenuity in the said invention.”

The “length of the jib is about three feet beyond the end of the vessel, which is built circular, as well to admit the raising and lowering of the buckets, as to allow a scow or mud boat to lie near enough to receive the load.”

“…..The merits of this machine are so great as to deserve the particular notice and encouragement of the public. To preserve docks of sufficient depth to float loaded vessels at low water, is a matter of vast importance to trade. It is therefore hoped, that gentlemen who are owners of wharfs, will think it such a proper object of their attention, as to promote its being carried into general use. Many of the docks in this city are now totally deserted by ships of burden, merely from the impracticability of loading there, and the evil is becoming very general; for extending wharfs into the channel, is but a temporary remedy, the eddy which sets into the docks continually depositing mud; but if once this machine could be brought into general use, the dock owner might enjoy the full benefit of his property, and the merchant be more conveniently accommodated.” Pennsylvania Magazine, PNE 68 P392 v.1, 1775.

The drawing has recently undergone treatment in the expert hands of paper conservator Anne Downey. Below are before and after images showing the results of her restorative work.