The Good Type of Dictatorships

August 11, 2017
Will Fenton was the 2017–2018 Elizabeth R. Moran Fellow and recently completed his Ph.D. at Fordham University where he specialized... END_OF_DOCUMENT_TOKEN_TO_BE_REPLACED 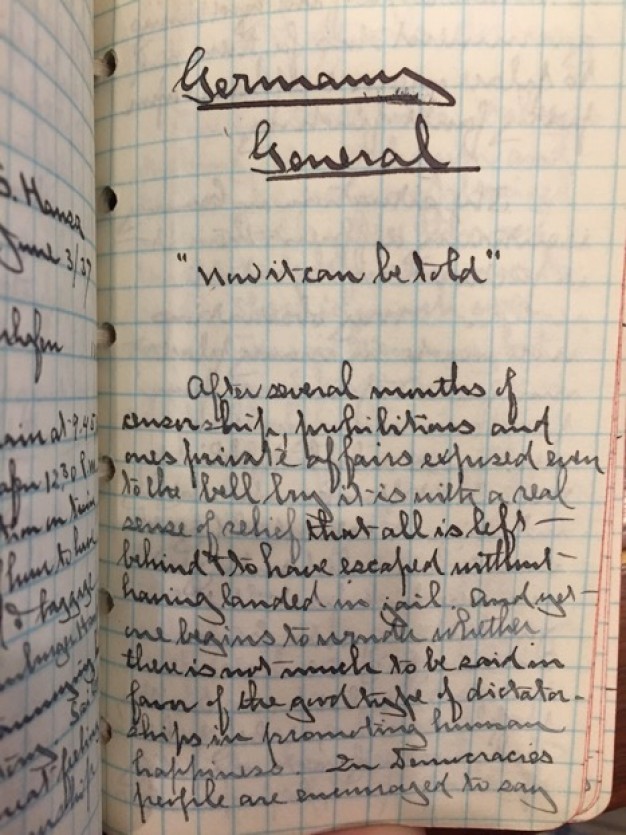 By any measure, public health leader Victor George Heiser (1873-1972) lived a long, productive, and vigorous life. His eighty-six diaries (1890-1970) predate the Spanish-American War and post-date U.S. escalation in Vietnam, while his career in public health put him in contact with politicians, diplomats, ambassadors, and government officials across the globe. An astute political observer, Heiser offers rich, on-the-ground insights into world history as it unfolded, from the rise of Ghandi to the fall of Hitler. He also offers unique—and troubling—explanations of and justifications for dictatorship.

Heiser’s dalliance with dictatorship began in the 1920s. Traveling war-torn Italy, he remarked on November 19, 1923 that there “appears to be unanimous agreement among natives and foreigners” that the new prime minister, Benito Mussolini, “has accomplished extraordinary results and that he is honest and genuinely patriotic.” Several years later, he documented the nation’s progress in developing infrastructure and improving services. He concluded his April 29, 1926 entry with an ominous justification for fascism: “Democracy gradually became so inefficient that all came to a standstill and a dictator was able to start the machinery on an effective basis.”

Heiser traveled widely during the decade proceeding World War II. On April 25, 1937, he returned to Italy and decried the ubiquitous military presence, government propaganda, and oppressive taxation. And yet, he ended his entry with a section entitled “The Other Side:”

A whole new social order has been created. Instead of people finding fault with what government fails in, the press and government propaganda constantly drive into their ears what government is doing for the people. (In the end will this not produce more peace of mind and happiness than our democratic way of emphasizing fault-finding)

On the topic of promoting public happiness, Heiser drew a similar conclusion during his visit to Germany on June 3, 1937. While he decried the Nazi government’s “censorship, prohibitions and [intrusion into] one’s private affairs,” he added:

And yet one begins to wonder whether there is not much to be said in favor of the good type of dictatorships, in promoting human happiness. In democracies people are [annoyed] to say or think little of the good things government does for them and to place main emphasis upon petty fault finding.

They have many surface advantages and it is hard to see how democracies are eventually going to be able to compete with them. It is as carried out in Italy and Germany at present the rule of the efficient as compared with a compromise with ignorance. Why should the ignorant have a [vice] about things they do not understand? Think of thousands of people voting for Franklin Roosevelt under the impression they were voting for Theodore. Or millions voting on free silver a gold without having the slightest comprehension of the significance.

Think of the thousands of unnecessary units of administration just because a few clever politicians know how to play on ignorant minds to keep themselves in useless offices. No strikes in dictatorships. Think of the tremendous saving. Dictatorships teach people to take pride in their government’s achievements and thereby produce happiness instead of the unhappiness that comes from constant fault findings in a democracy.

Germany in spite of being bankrupt is pulling out with the efficiency of well-run corporation.