August 5, 2021
Share
Marian L. Christ is Associate Librarian and Head of Cataloging. She received her MLS from Drexel University and BA from... END_OF_DOCUMENT_TOKEN_TO_BE_REPLACED 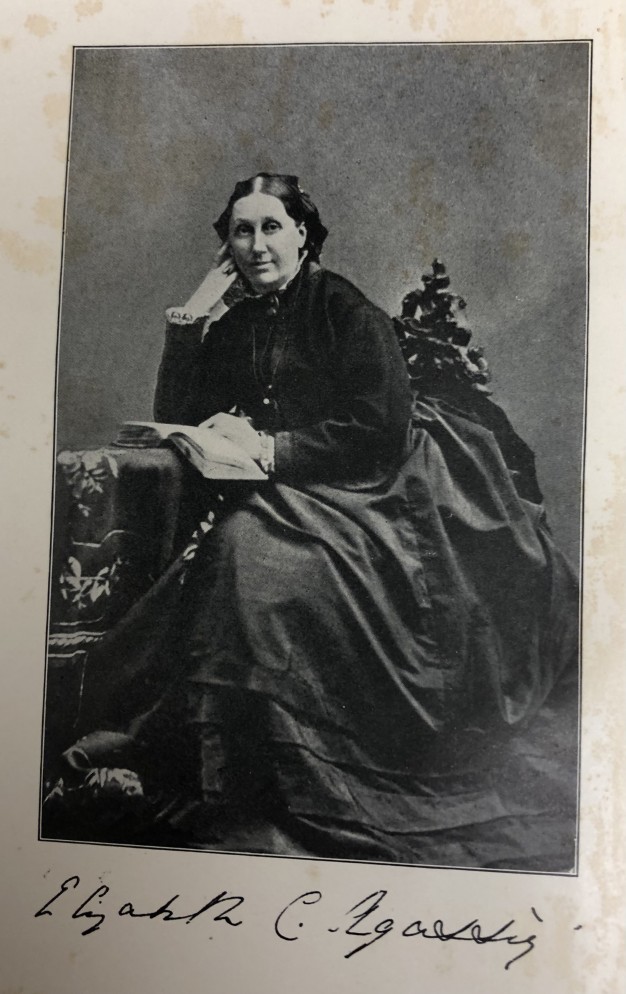 Elizabeth Cabot Cary Agassiz (1822-1907), the second woman elected to membership in the American Philosophical Society (1869), contributed significantly to science and championed women’s education. Ironically, the woman who would become the co-founder of Radcliffe College in Cambridge, Massachusetts was the only one of the five Cary daughters who, because of her delicate health, never attended school. She did, however, receive tutoring from educational reformer Elizabeth Peabody at Peabody’s Historical School in 1834. But the frail child transformed into a strong and energetic woman who married the noted Swiss naturalist Louis Agassiz in 1850, and eventually traveled the world with him. She not only assumed the responsibility for rearing widower Agassiz’s three children, but she also contributed to the family finances by starting, with her husband, a girls’ school in their home in Quincy, Massachusetts. There, Professor Agassiz taught courses in science and arranged for other Harvard professors to teach courses in other fields. The school closed in 1863.

Another important chapter in Elizabeth’s life opened in 1865. Her husband decided that his deteriorating health demanded a change of climate and suggested they spend a summer in Rio de Janeiro. His pleasure trip, however, turned into an important scientific expedition when Nathaniel Thayer, a financier and philanthropist, funded the exploration on behalf of the Harvard Museum of Comparative Zoology. It was Elizabeth, however, who became the principal planner, manager and record keeper of the resulting Thayer Expedition to Brazil (1865-1866). Louis Agassiz reported his scientific observations to his wife daily, and she wrote a journal to narrate the expedition for their friends. “In consequence of this mode of working, our separate contributions have become so closely interwoven that we should hardly know how to disconnect them …” A Journey in Brazil, the book produced by these efforts, clearly demonstrated this seamless collaboration.

The writing team of Elizabeth and Louis Agassiz offered a balanced description of Brazil, including not only a detailed description of its tropical fauna, but also a tribute to Brazilian culture and progress. And it was Elizabeth Agassiz’s patient transcription of her husband’s notes, along with her own journal, that secured a book publication date only two years after the expedition set out. Many praised the charming and instructive format which merged the two accounts. For example, Oliver Wendell Holmes wrote:

“It is a new world to most of us, to me certainly, and I am sure we all feel that it is a rare privilege to wander through it, under the guidance of such explorers. So exquisitely are your labors blended that as with the mermaiden of ancient poets, it is hard to say where the woman leaves off and the fish begins …”

Elizabeth Agassiz would go on to organize and manage her husband’s participation in the Hassler Expedition to the Straits of Magellan, a United States sponsored marine expedition, in 1871 and 1872, but the strain of this work, together with a project Professor Agassiz took on when he returned home, would prove to be too much for him, and he died in 1872.

After her husband’s death, Elizabeth Agassiz concentrated on writing his memoirs, but in 1879, she interrupted these efforts when her neighbor, publisher Arthur Gilman, asked for her assistance. He remembered her earlier girls’ school taught by Harvard professors, and asked her to join an effort to establish a school to provide higher education for women.  Her unwavering belief that women should be taught the same subjects by the same instructors as men, led her to found, with other visionaries, the Harvard Annex, which was later incorporated by the State of Massachusetts as the Society for the Collegiate Instruction of Women. The Society opened in 1879 with twenty-seven women students. As the president, she supervised an organization that provided excellent instruction, but could not grant official academic degrees. Her determination and diplomacy led to the Society’s charter as Radcliffe College in 1894, with its own degree-granting status. She was President of Radcliffe College until 1899, and its honorary president from 1900 to 1903. She died in 1907 at the age of seventy-five.

Agassiz, Louis. A Journey in Brazil, by Professor and Mrs. Louis Agassiz. Boson: Ticknor and Fields, 1868.