April 23, 2020
Share
Processing archivist, page in the reading room. Prior to relocating to Philadelphia from the Boston area, was the curator of... END_OF_DOCUMENT_TOKEN_TO_BE_REPLACED 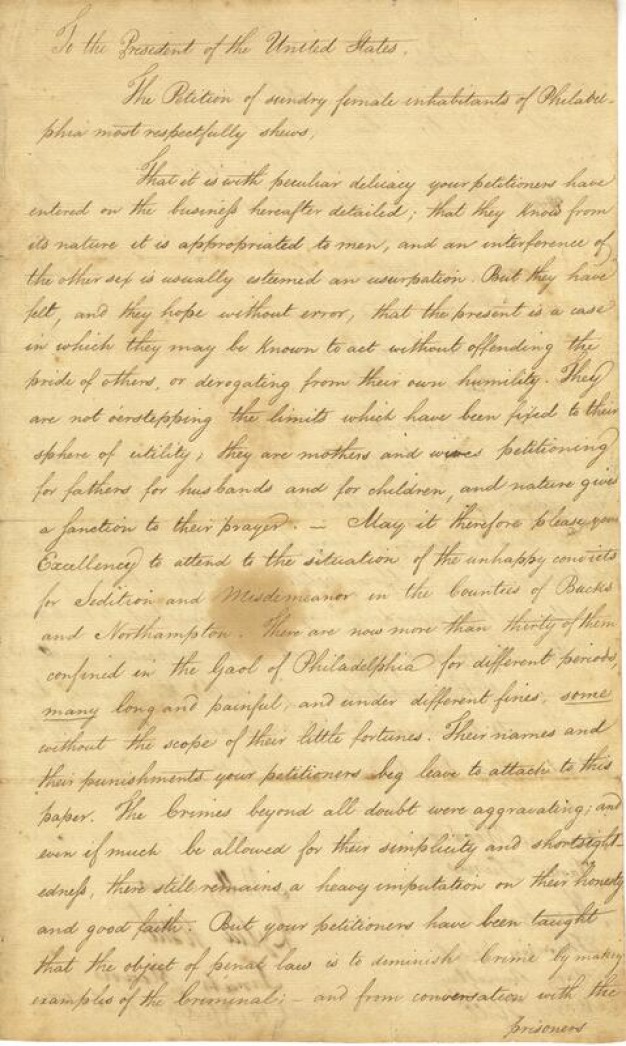 A researcher interested in the Whiskey Rebellion of 1795 recently shed new light on this remarkable, yet undated, petition. Over the years, this petition has been identified as “Washington, George...Philadelphia.Citizens,” implying that it was sent to George Washington as a request to release those imprisoned during the Whiskey Rebellion. However, rather than being sent to Washington in 1795, the reader suggested it was more likely a petition written to John Adams in 1799, requesting the release of convicts arrested during the Fries Rebellion.

In 1798, just as the Quasi War between the United States and France threatened to escalate, Congress levied a property tax to build up the Navy and prepare to defend the homeland. Citizens of Northampton and Bucks Counties, including John Fries, refused to pay the tax, claiming it was unconstitutional. Within six months, opposition to the tax had escalated from angry speeches to open insurrection. In response, President John Adams sent a force of Federal troops to quell the rebellion. In all, thirty one protesters were arrested and brought to Philadelphia’s Walnut Street Jail. Fries and two accomplices were sentenced to be hanged.

Concerned for the wives and families of those imprisoned, a group of women set into action. They requested that President Adams "... attend to the situation of the unhappy convicts for Sedition and Misdemeanor...." and that he have mercy for the "... widowed mother and her orphans who while the sentence of the law is executing may pine and perhaps die in comfortless poverty." They insisted that, if pardoned, the prisoners would return home “carrying with them what it is partially the design of their punishments to induce,” a better understanding of their country’s laws, and, perhaps equally as important, “hearts most grateful for its lenity.”

Since our researcher’s discovery, I have been attempting to determine who the petitioners were, where they lived, and what motivated them to plead for the lives and pardon of the prisoners. So far, I have determined that they were not related to the prisoners, and, with the help of marriage records and other directories, have identified thirty-three of the seventy-two signers. Some were neighbors, while others lived outside of Philadelphia. They represented different faiths, backgrounds, lifestyles, and professions. For example, Mary Sweitzer and Ann Cochran were printers. Another petitioner was a well to do widow whose son in law lost a fortune to investing with Robert Morris. One was an innkeeper. Others were wives and daughters of ministers of varying faiths. Three were daughters of Quaker John Roberts, who was hanged in 1778 after being accused of aiding the British when they occupied Philadelphia during the Revolution.

In the end, Adams pardoned the prisoners. Though doing so infuriated his cabinet and cost him his bid for a second term, in 1809 he reflected: “in the pardon of Fries… I recollect with infinite satisfaction and which will console me in my last hour.”