January 17, 2019
Share
Ms. Joyet is the Assistant Head of Cataloguing. After graduating from Drexel University's iSchool in 2009, Ms. Joyet was hired... END_OF_DOCUMENT_TOKEN_TO_BE_REPLACED 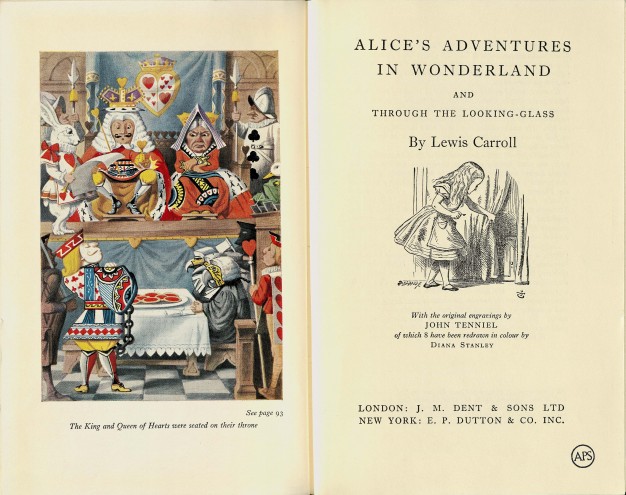 In 1976, John Archibald Wheeler deposited his papers with the American Philosophical Society. Ten years later, James Wheeler officially presented the papers to the Society. The collection holds many in-jokes, including a framed bet that Dr. Wheeler had with some of his graduate students, which reads as follows:

“Record of Two Bets. I, Austin Gleeson, stake $1 (one) that the universe is open. I, John Wheeler , stake $100 (one hundred) that the universe is closed. I, {Luigi Radicati, Bryce DeWitt} bet one dinner at a Michelin 3-star restaurant that by the year 2001 quantum mechanics a la Dirac {will not, will} be regarded by the majority of physicists as being valid universally." Signed by the bettors and witnesses. Austin, Texas. 10 September 1978.

In addition to bequeathing his papers, Dr. Wheeler also gave the Library several hundred books. The large majority of these books are complicated works on physics, with one notable exception: his birthday presentation copy of Alice in Wonderland. It was given to Wheeler on the occasion of his 60th birthday, held at the 6th International Conference on GRG in Copenhagen in 1971. The book is signed by 71 luminaries in physics who attended the conference, including Kip Thorne and Roger Penrose. In addition to this collection of autographs, the book boasts notes that Wheeler himself made on the back pages relating to the actual text of Alice in Wonderland. Finally, another wonderful addition to the book’s provenance is a book review from the New York Times Review of Books from that same year.

But let us consider the book itself. It was published by the London-based firm of J.M. Dent in 1966. The garishly illustrated cloth cover and lining pages are a testament to the time period, as is the bright green dust jacket. The book also holds the John Tenniel illustrations. Lewis Carroll wanted John Tenniel to illustrate his book because of Tenniel’s use of the grotesque: “his dark atmospheric compositions of exaggerated fantasy creatures that were carefully drawn in outline.” In fact, Tenniel’s depictions of Alice have become the definitive illustrations for the work.

Ever since Jefferson Airplane gave us “White Rabbit” in 1967, this children’s classic has been associated with drug use and so, the cataloging department initially assigned the subject heading “Drugs -- Fiction” and “Hallucinations & illusions -- Fiction.” After consultation with the University of Pennsylvania’s Kislak Center for Special Collections Reader Reference Librarian, April James, the cataloging department changed that subject heading to “Dreams -- Fiction.” Ms. James explained that Carroll had no intention of making overt drug references; that Alice is in a dream and the book is a work of upside-down logic. In fact, mathematicians, physicists, and logicians routinely present at Lewis Carroll conferences.

Which brings us back to Wheeler’s science. When lay people hear theoretical physicists talk about quantum mechanics and the universe as closed or open, it can seem like a dreamscape. When Dr. Wheeler made that bet with his students in 1978, he had already theorized that wormholes—or rabbit holes?—were tunnels in space-time. He and Richard Feynman considered the reversibility of time in the Feynman Diagrams; and in his “it from bit” doctrine, Wheeler proposed that we create our own universe with a set of binary choices.

It is with this context that we place this popular fictional work in our stacks. Wheeler’s annotated copy of the Alice in Wonderland is available to all who wish to discover it in our catalog: 823 C12a.