August 14, 2017
Share
Marian L. Christ is Assistant Librarian and Head Cataloger/Bibliographer. She received her MLS from Drexel University and BA from Beaver... END_OF_DOCUMENT_TOKEN_TO_BE_REPLACED 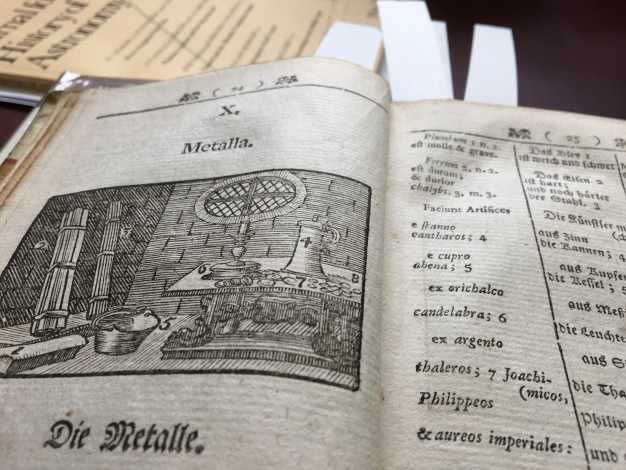 In 2015, APS Member Hans Aarsleff, a distinguished scholar in the history of linguistics, donated a beautiful collection of books on linguistics and philosophy to the Library. Among them is a 1781 Nuremberg edition of the Orbis Sensualium Picti of Johann Amos Comenius (1592–1670), originally published in 1658, and the most famous of Comenius’s many treatises and textbooks.

Comenius was a scholar of educational, spiritual, and social reform. Orbis was an attempt to summarize, in pictures and text, the essential knowledge of the world, while reflecting the author’s conviction that all learning begins with the senses. In the preface, he states that the pictures must be “open, clear and articulate like the fingers of the hand.” Comenius began to formulate ideas for such a textbook when he answered an invitation to reorganize a grammar school in Transylvania (Romania today), only to find that its pupils were ill-trained and its teachers uninterested. He needed a book which could be used by unlettered children and unskilled teachers, and what he eventually produced was one of the most important books in the history of education.

Of course, illustrated children’s books already existed, but this was the first example of the extensive use of pictures in a textbook for children. It was enormously popular in Europe and America; it was printed in the United States until 1887. The numbers in the illustrations correspond to the words in the text on the opposite page, set out first in Latin, then in the vernacular—in this case, German. So in the Metalla/Die Metalle illustration, number four is beside the picture of a tankard, with the word for it in Latin in the first column, and in German in the second column.