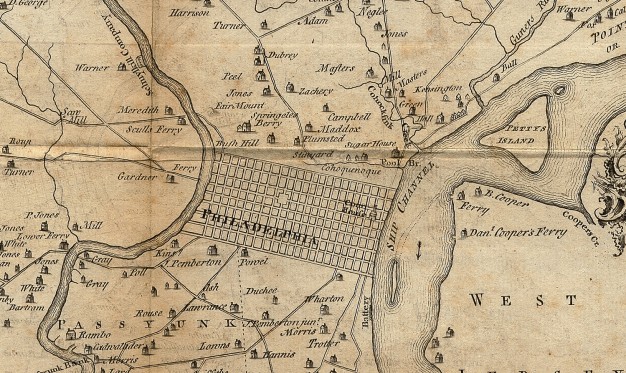 In the summer of 2020, my research at the APS as a Curatorial Intern, has been focused on the effects of climate on the human body, specifically how this relationship has been conceived of historically. Benjamin Rush’s 1789 work “An Account of the Climate of Pennsylvania and its Influence on the Human Body,” highlights this theme, and provides valuable insights into commonalities between modern understandings of the environment and those of the 18th century. Rush, one of the most influential physicians in the early republic, was heavily involved with public health in Philadelphia. In his “Account” he examines the causative environmental and meteorological factors in various diseases prevalent in the city. The text is full of fascinating observations about Pennsylvania in the late 18th century, but one aspect of it in particular stood out to me—Rush’s account of the deforestation of the land surrounding the city.

Rush states that over the course of the British occupation of Philadelphia during the Revolutionary war, the army cleared large swaths of trees just outside the city. Per Rush, this caused an increase in “intermitting and bilious fevers.” Interestingly, he observed that these fevers decreased once the land had been cultivated. In this relationship with nature, humans attempted to dominate their environment, but were ultimately at its mercy. The forest protected the city, but following its destruction, the land needed to be “fixed” by way of European agriculture. Land development took on a highly imperative nature—the health and well-being of an entire city of people was contingent upon it.

Benjamin Rush’s observations on deforestation and climate provide valuable insights into the environment of Philadelphia as a whole at the time of his writing, and highlight concerns that remain present to this day. His concerns around deforestation, particularly, remain relevant. Clearing trees has also been linked in modern times to increases in epidemic disease, particularly malaria and dengue fever, similar in character to the “intermitting and bilious fevers” to which Rush refers. Additionally, deforestation leads to more abnormal encounters with animals fleeing habitat destruction, which have the potential to cause increases in “spillover” events, where diseases jump from animal vectors to  humans. Such events have been the harbingers of some of the most concerning illnesses in recent history, including SARS, Ebola, and COVID-19.

Rush’s essay is just one small facet of the research I have done this summer, but it illustrates an important point—that the historic through-lines in the study of climate, public health, and the human body, have broad implications for the study of climate today.